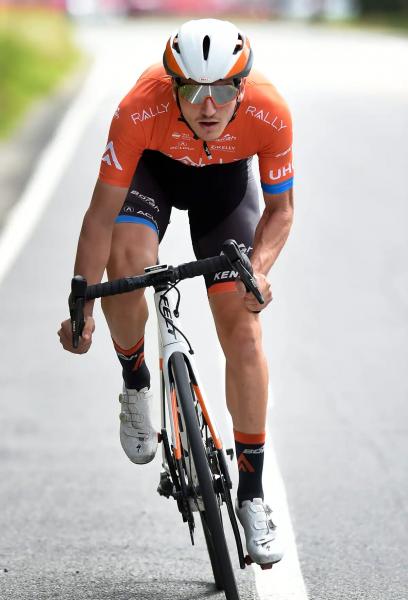 A 239.2 kilometer challenge awaited cyclists on Thursday during the third stage of the Tour of Denmark. For Nickolas Zukowsky and Pier-André Côté (Human Powered Health), it was the longest international outing of their careers.

Both working for Dutch teammate Arvid De Kleijn, Côté (35th) and Zukowsky (39th) finished the race among the leading group, after a grueling day's work.

“The stage became physically difficult in the last 60 kilometers, it felt like a one-day race. I'm really happy, not only with today's stage, but also with what I've been able to do since the beginning of our stay in Denmark. It’s encouraging to have a good race today in such a tough peloton,” commented Côté in an interview with Sportcom.

“It was as demanding physically as mentally. It was a long stage with, in addition, eight sectors of gravel. This is the kind of stage that I like on the other hand. I made a small mistake that made me lose several seconds and I found myself behind in the last two sectors, I had to work hard to get back in the leading group,” added Zukowsky.

Even if they are happy to see their teammate De Kleijn crack the top-10 of the day, in eighth place, the two Quebecers would have liked to see him on the podium at the end of the day.

“We did a good job, Nickolas and I, to bring Arvid De Kleijn to eighth place. He said he made a small mistake in the last corner, we totally forgive him, that's for sure! mentioned Côté.

< p>“We would have really liked to push Arvid on the podium and even towards a stage victory. I had put a lot of energy into coming back from behind earlier in the race and it cost me dearly in the end, I managed to help him anyway, but there was a little something missing. added Zukowsky

Guillaume Boivin (Israel – Premier Tech) also crossed the finish line in the same time as the winner, in 43rd place.

It's the Dutchman Olav Kooij (Jumbo-Visma) who won in the sprint, just ahead of his French teammate Christophe Laporte. Denmark's Magnus Cort (EF Education-EasyPost) finished third.

American Magnus Sheffield (INEOS Grenadiers) retains first place overall, but is closely followed by Laporte who climbs to the second place by virtue of the bonus seconds obtained with his second place of the day. Mattias Skjelmose Jensen from Denmark (Trek – Segafredo) is third (+3 seconds).

On Friday, cyclists will visit the Salling Peninsula on a 167.3 kilometer loop.