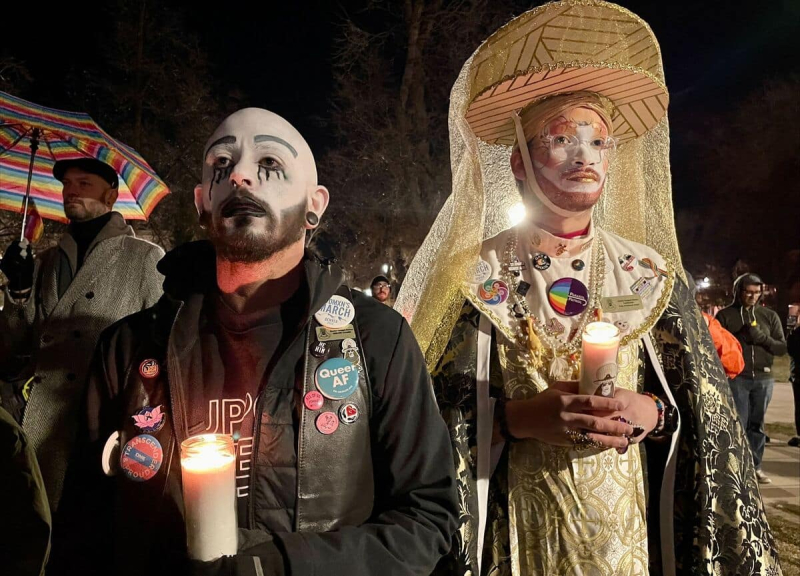 COLORADO SPRINGS | There were tears, hugs, anger and a few smiles too Monday night at a park in Colorado Springs where several hundred people attended a vigil for the victims of the Club Q shooting, a popular spot for the LGBTQ community.

Some huddled together in groups, with their candles, to share memories of the five people killed Saturday night in the latest example of the killings that regularly strike the United States.

Others sobbed as they listened to speakers denounce the unreasonable hatred that has cost people their lives simply because of the people they loved.

“We shouldn't have been here tonight,” Allie Porter shouted to the crowd. “It's not fair, neither to them nor to any of you. We shouldn't have had to be here. This should never have happened.”

At the foot of a stage were placed the portraits of the five people who fell under the bullets which shattered on Saturday just before midnight this refuge of the gay community in Colorado Springs, a city at the gateway to the Rocky Mountains.

The shooter, Anderson Lee Aldrich, 22, was overpowered by two patrons and arrested. Just before he opened fire, a drag queen show had just marked Transgender Day of Remembrance, dedicated to victims of transphobic violence and celebrated internationally on November 20.

The attack came six years after the worst mass shooting in the LGBTQ community in the United States when an Afghan-American killed 49 people at a gay nightclub in Orlando, Florida.

On the scene, some shared their memories of the victims, eliciting smiles that quickly turned to sobs. Signs assured that “hate has no place here”. Speakers lashed out at what they denounce as hateful rhetoric by far-right politicians, reinforced in the weeks leading up to the recent midterm elections.

“We need to put an end to this political project against the LGBTQ community,” cabaret artist Bunny Bee told the crowd.

“We must continue to fight the hate, the politicians who endanger lives in this community.”

Intolerance must end, added Jimmy Gomez-Beisch, also cabaret artist. “Stop killing us. The violence simply has to stop. The hate must stop. We need to come together as human beings.”

Many spoke of how they were able to find within Colorado Springs' tight-knit LGBTQ community, and especially at Club Q, the loving support they needed to feel comfortable in their identity. p>

A support mentioned by several speakers to face the tragedy. “I want everyone here to remember they are loved,” said one, named Cole. “You are wanted, you are not scum. We are at home here. We have the right to exist.”

Bunnie Phantom, 25 and working in piercing, assures AFP that the community is strong enough to overcome the horror of this massacre.

“I’m so glad everyone was able to come together,” she says. “To see everyone here, to have the support and the image of the community (…) it actually means the universe to me”.

She assures that she will return to Club Q when it will reopen, “simply to support it and simply because I feel safe there”. And she adds: “I'm not going to hide because of what happened”.