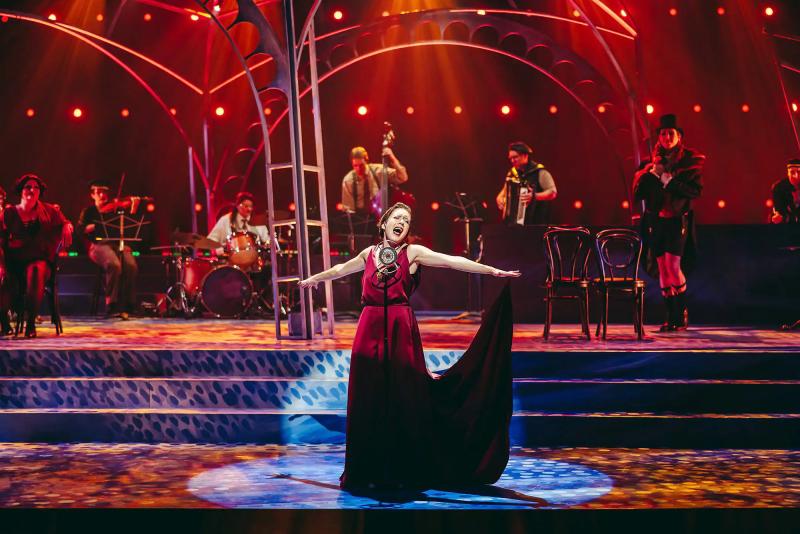 A perfect combination of musical comedy and theatre, Cabaret explodes on the stage of the Octave-Crémazie hall. Joe Masteroff's work, created on Broadway and adapted for the cinema, launches the 52nd season of the Trident in spectacular fashion.

On display until October 8, Cabaret was scheduled to be presented in 2020 on the occasion of the 50th anniversary of the Trident. There have been two postponements due to the pandemic and the closure of performance halls.

With its flamboyance, 14 actors and six musicians, this musical theater falls right after the upheavals and uncertainty years.

Cabaret, is the love story between the young American writer Cliff Bradshaw and the frivolous Sally Bowles around the Kit Kat Klub nightclub. A love story set in 1930 Berlin, against the backdrop of the rise of Nazism.

Directed by Bertrand Alain, Cabaretoffers a nice balance between entertainment and a more dramatic segment that unfolds during the second portion of the show. As much as the first part is entertaining and flamboyant, the final segment plunges into dramatic emotions.

At the Kit Kat Klub, under the direction of the master of ceremonies, it's frivolous, sulfurous and sexy, with the fauna and the dancers of this place of all possibilities. After the intermission, the rise of Nazism destabilizes this universe.

There is a good mix of song, dance and acting. Sarah Villeneuve-Desjardins, in the role of the unstable Sally Bowles, and Vincent Roy, in that of the master of ceremonies, are the big stars of this rich and elaborate production. .

Sarah Villeneuve-Desjardins is spectacular with her voice, her ability to immerse herself in the flamboyance of her character and her intense acting . She offers a huge moment when she returns, in the second part, to sing at the Kit Kat Klub. We feel all the emotions that inhabit him through his voice and his gestures. Vincent Roy is, for his part, perfectly charismatic.

The choreographies, signed by Harold Rhéaume, are successful. It flows, it is well assembled and we feel the pleasure on the stage. The opening scene, with 20 people on stage, is superb and full of movement.

Cabaret unfolds in a unique setting where we find the Kit Kat Klub , a train station, a small hotel and Sally and Cliff's room, interpreted by Gabriel Cloutier-Tremblay.

Humor is present throughout the 2 h 30 min of the show, including an intermission.

An elaborate and well-balanced musical theatre, Cabaret is a grandiose work worthy of an institution like the Trident, which can afford this genre. of production. A proposal that reveals Sarah Villeneuve-Desjardins and Vincent Roy. Yes, the wait has been long and it will have been worth it.