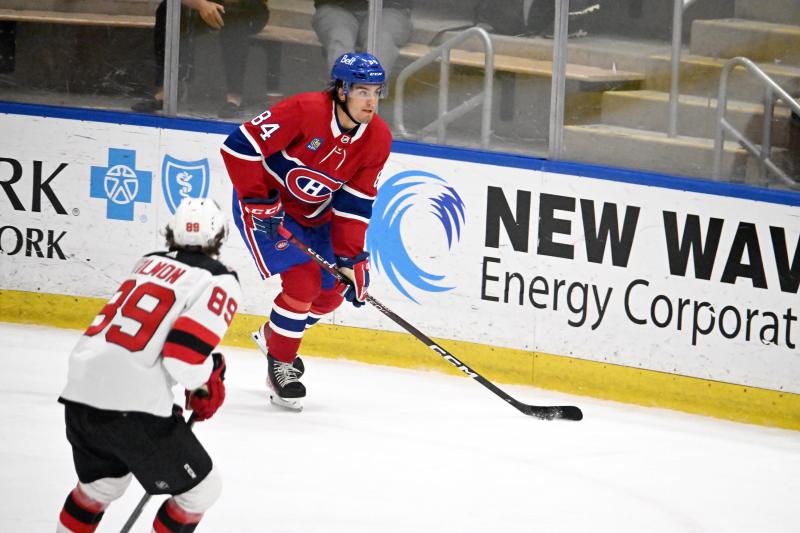 BUFFALO | William Trudeau puts it bluntly. “I'm not going to hide it. I think I'm going a little under the radar here. But if I end up playing several good games, I will also get noticed. I have my place too. »

Trudeau ended up playing good games. At the rookie tournament at Buffalo's Harborcenter, the 2021 fourth-round pick donned the Canadiens' uniform for all three games.

In the shadow of the biggest names like Jordan Harris, Justin Barron, Kaiden Guhle and Arber Xhekaj, Trudeau has also earned his place in the sun. He can come out of this experience with his head held high. He played very well against the prospects of the Sabres, the New Jersey Devils and the Ottawa Senators.

On a strictly numerical level, he scored a goal and had two assists in three outings. But he also offered solid play by relaunching the attack well in addition to distributing some good checks.

Jim Hulton knows the young defender from Varennes well. He managed it during the last three seasons with the Charlottetown Islanders in the Quebec Major Junior Hockey League (LHJMQ).

“I'm not surprised, I suspected that William was to play well in the rookie tournament,” Hulton said in a phone interview with the Journal. Ever since he was young, Will has always outsmarted plans and done more than was expected of him.

“In the QMJHL, the Voltigeurs drafted him in the 10th or 11th round in 2018 and we acquired him in a trade a few months later. But he was absolutely not the key in the exchange. He has a knack for overcoming obstacles and proving people wrong for not believing in him. »

Hulton, who wears the hats of general manager and head coach in Prince Edward Island, didn't have to dig into his personal archives to reminisce about Trudeau's early days with his organization.

He was an 11th round pick of the Voltigeurs. And on December 24, 2018, the Islanders got it in a major trade that moved defender Pierre-Olivier Joseph from Charlottetown to Drummondville.

“He's used to being in the shadows,” the Kingston native said. This was the case in his debut in the QMJHL. In his first season with the Islanders, we put him in the stands. In a few years, he has become one of the best defenders on the circuit.

“Will makes a coach happy because he listens, he wants to improve and he is always better than 'one can think. »

Trudeau gave a positive assessment of his rookie tournament.

“I wouldn't say I'm surprised, but I'm really happy with my game. I had a big summer in Brossard. When I arrived here [in Buffalo], I wanted to show my true colors. They tell me to play my style and that they like my physical game and my raises. I get good words. »

In Laval, Charlottetown or perhaps elsewhere

BUFFALO | William Trudeau will turn 20 on October 11. He could therefore make the jump to the American League with the Laval Rocket this year.

“I think like all 20-year-old players I would like to play in the American League,” Trudeau said. But I don't want to look too far. I focus on rookie camp and real camp. We'll see after. »

Jim Hulton is one of those who believe in his chances.

“It's possible because of his hockey intelligence,” said his coach in the QMJHL. He reads the game in an elite way. I do not know his contractual situation with the Canadiens and the Rocket, but in terms of hockey, he can win a position in Laval. He has the talent for that even if he remains young. »

Canadian hockey bosses Kent Hughes and Jeff Gorton will have a decision to make with their young defender. There will be many candidates for the Rocket. Madison Bowey, Mattias Norlinder, Otto Leskinen, Gianni Fairbrother and Tory Dello should play under Jean-François Houle. And in this group, there will be two or three other young hopefuls who will end up in Laval among the following five: Kaiden Guhle, Justin Barron, Jordan Harris, Arber Xhekaj and Corey Schueneman.

Trudeau could also return to Charlottetown as a 20-year-old. The Islanders, a rebuilding team, could trade him by the trade deadline.

“We're looking at all of our options,” Hulton said. We will do what is best for the team, but we love William very much. If he stays with us until the trade deadline, he will serve as a great role model for our youngsters. He could be our captain, he is one of our candidates. »

Whether in Laval or Charlottetown, Trudeau knows he won't waste his time.

“I could learn a lot from the pros by playing against older players and practicing with them. That would be a big plus. But if I remain a junior, there would also be positives. I would play an important role and I would have a lot of playing time. »