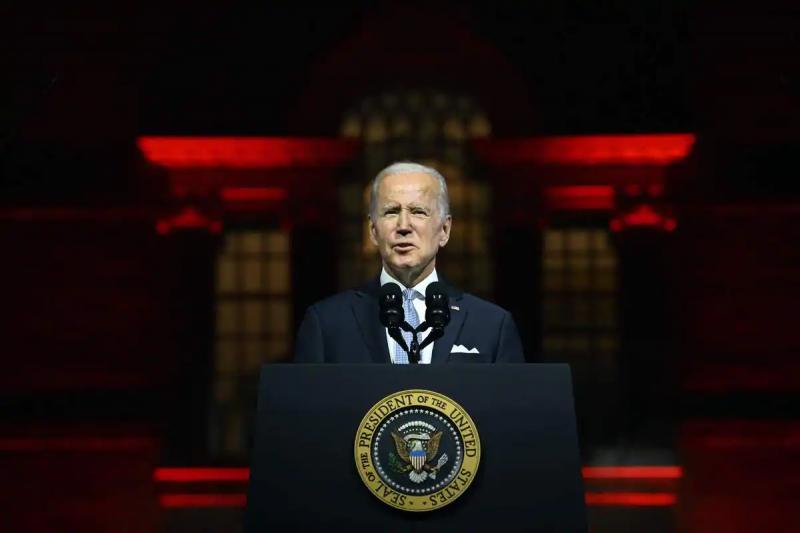 Joe Biden, in a rare direct attack on his Republican predecessor, on Thursday denounced the “extremism” of Donald Trump and his supporters, accusing them of shaking the “very foundations” of American democracy , in the city that was its birthplace.

Speaking in Philadelphia (east), he claimed: “Donald Trump and the + MAGA + Republicans represent an extremism that threatens the very foundations of our Republic”.

The former president and those who subscribe to his ideology +Make America Great Again+ “does not respect the Constitution. They don't believe in the rule of law. They do not recognize the will of the people,” hammered the Democratic president, in this rare “primetime” speech.

Behind him, standing out all lit up against the night sky, the “Independence Hall”, a red brick building where the Declaration of Independence and the American Constitution were adopted.

The democrat, who had held in Philadelphia her first meeting as a presidential candidate, also knows that the state she is in, Pennsylvania, may hold the key to the November legislative elections. And therefore the rest of his mandate.

Representatives of the radical right “applaud the anger. They feed on chaos. They do not live in the light of truth, but in the shadow of lies,” chanted the 79-year-old president, who wants to galvanize the Democratic electorate and convince the undecided.

Donald Trump and MAGA Republicans represent an extremism that threatens the very foundations of our Republic.

They don& #39;t respect our Constitution.

They don't believe in the rule of law.

And they don't recognize the will of the people.

Once elected, this veteran politician bet that the “battle” would be waged through dialogue with well-meaning conservative elected officials, and through reforms in favor of the middle class.

But the great air of reconciliation has been muted.

Every favorable poll encourages Joe Biden to let go, he who recently accused supporters of Donald Trump of adhering to an ideology of “semi-fascism”.

The term has outraged the conservative camp, which accuses the president of stirring up divisions.

Kevin McCarthy, a Republican elected official who covets the prestigious leadership of the House of Representatives, accused Joe Biden on Thursday of “demonizing” “tens of millions of Americans who work hard and obey the law.”

According to a poll published Thursday by the Wall Street Journal, if the midterm legislative elections were held today, 47% of voters would vote Democrat, and 44% Republican. The right still had a 5-point lead in March.

The Democrats are dreaming of a feat during this election which renews the entire House of Representatives and a third of the Senate, and which is traditionally unfavorable to the party represented in the White House.

Opinion polls are not infallible and, in American political life, two months is an eternity. But the political debate has shifted since the start of the summer.

Inflation has calmed down, while Joe Biden pushed through a series of reforms, and announced the death of the leader of 'Al-Qaeda. Enough to blunt two angles of attack from the Republicans: the defense of purchasing power, and the skills of the oldest president ever elected in the United States.

The Democrats, led by Joe Biden, want to move the debate on the defense of the right to abortion and the achievements of society, and the defense of democracy.

With Donald Trump in his sights, who said Thursday that he intended to pardon all the Capitol attackers on January 6, 2021, if ever re-elected to the White House.

The Democratic Party, which will find it difficult to retain the House of Representatives, hopes to keep its majority in the Senate.< /p>

Which means winning Pennsylvania. Joe Biden has already been there on Tuesday and will return there on Monday. Donald Trump will be there on Saturday.