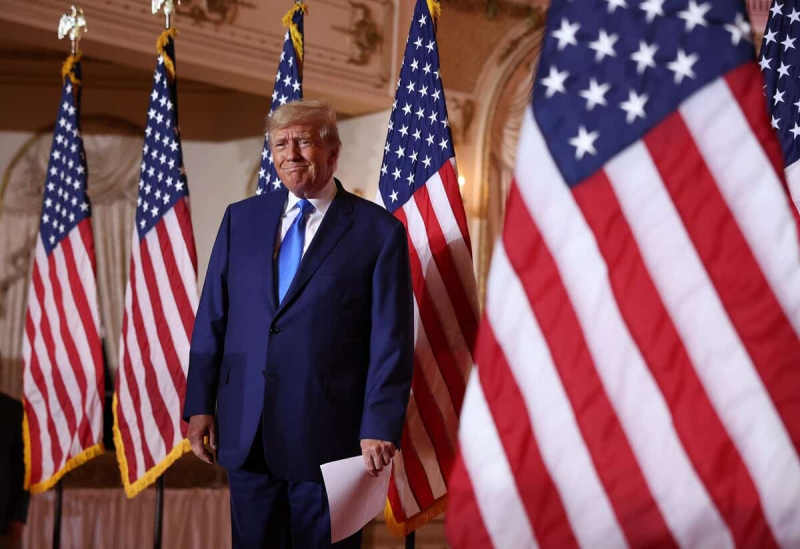 He's about to step back into the arena: Donald Trump is set to announce his candidacy for the 2024 U.S. president on Tuesday, ignoring calls from part of his camp to step down after the poor performance of his foals in the midterm elections.

The Republican billionaire promised a “very big announcement” from his luxurious residence in Mar-a-Lago, Florida, to 9:00 p.m. local (02:00 GMT Wednesday) — the content of which no longer really arouses suspense but which should nevertheless delight its millions of supporters.

His adviser Jason Miller promised a “very professional, very neat” statement, in which the former president will be surrounded by a large group of “sign-holding” activists.

Known for his unpredictability , Donald Trump, who has been flirting for months with the idea of ​​running again, could still upset the calendar at the last minute.

A retreat would be difficult, however, as it has raised expectations. The businessman predicted that Tuesday could well be “one of the most important days in the history of our country”.

Coming to power in November 2016 in an unprecedented political scenario that almost none had predicted, Donald Trump had flouted all customs during his presidency. He left Washington in chaos after failing to win re-election to Joe Biden — a defeat he never conceded.

This new candidacy would therefore be the septuagenarian's third in the White House.

It also foreshadows a possible remake of the 2020 presidential election: President Biden recently reaffirmed his “intention” to run for a second term, though he was careful to push back any final decision until next year.

Was he going to declare himself a candidate even before the end of the “midterms”? Rumors have been swirling in recent weeks about an imminent announcement by Donald Trump, the ex-president then determined to ride on the anticipated success of the Republicans in the elections of November 8 to regain power.

But the “giant wave” predicted with great aplomb by conservatives has not materialized, far from it: President Biden’s Democratic party made sure this weekend to keep control of the Senate, and could even expand its majority, thwarting the predictions of the pollsters.

The Republicans will most likely take over the House of Representatives from the Democrats, but with a significantly smaller majority than expected.

To make matters worse, one of his close allies, Kari Lake, failed Monday to seize the coveted seat of governor of Arizona.

This more than mixed performance of the Republican camp, in particular on the part of candidates dubbed by Donald Trump, has tarnished the reputation of the kingmaker of the tribune.< /p>

Several influential voices in the conservative camp have called on the real estate magnate to step aside from Republican leadership, casting a shadow over his presidential plans.

His former vice president, Mike Pence, who publishes Tuesday his memoirs in which he recounts, among other things, the pressures suffered to overturn the results of the 2020 presidential election, notably refused to comment on a possible candidacy of Donald Trump during an interview on the American channel ABC broadcast Monday evening. /p>

“It's up to the Americans to decide, but I think we will have better choices in the future,” said Mr. Pence, who is also credited with presidential ambitions for 2024.

But part of the conservative electorate has already turned to another possible contender for the White House and resident of Florida: its governor Ron DeSantis. The 40-year-old, a new star of the hard right, who is coming out stronger from the mid-term elections, assured that his fight “was only just beginning”.

But Donald Trump retains undeniable popularity with his base for the moment, a tide of red caps that continues to flock to his campaign meetings. The majority of the polls still give him the winner of a Republican primary.

However, one obstacle could complicate Donald Trump's ascent to the White House: his numerous legal troubles, which could end up disqualify him.

The former president is the target of several investigations for his role in the attack on the headquarters of Congress on January 6, 2021 or his management of the White House archives.

Based on a “ instinct” always put forward, Donald Trump, whose fall has been announced a thousand times, has so far survived all the scandals. As if, by dint of accumulation, they no longer had any effect on him.

The investigations around Donald Trump

A status as a candidate for the White House will make a possible indictment of Donald Trump more difficult, but will not close the multiple investigations weighing against the former president.

Justice is investigating his role in the assault on the Capitol, its financial affairs, its management of the archives of the White House or the pressure exerted on electoral agents.

The Republican billionaire, who is not the subject of any charges at this stage, continues to denounce political persecution. A 2024 presidential bid could therefore discourage prosecutors from pursuing him.

If they indict him anyway, it would cast a shadow over his campaign without preventing him from running: nothing in the law does not prohibit a person prosecuted, or even convicted, from seeking a presidential mandate.

Update on his run-ins with the law:

A parliamentary committee is investigating Donald Trump's role in the attack by his supporters on the headquarters of Congress on January 6, 2021, when elected officials certified the victory of his rival Joe Biden in the presidential election.

In high-profile hearings, she showed that he had heated his supporters white before the coup and “failed in his duty as commander-in-chief” during the assault.

This commission , with a Democratic majority, summoned him to appear, but he took legal action to escape his summons. Its members should therefore submit their final report by the end of the year without having heard it.

In this document, they will be able to advocate for the prosecution of Donald Trump, but the last word will go to the Minister of Justice Merrick Garland, whose office has already indicted more than 870 participants in the attack.

Known for being methodical and cautious, the minister does not rule anything out. “Everyone who is criminally responsible for efforts to nullify the election will be held accountable for their actions,” he said.

< p>Leaving the White House, Donald Trump took entire boxes of documents. However, a 1978 law obliges any American president to transmit all of his emails, letters and other working documents to the National Archives.

In January, he returned 15 boxes. After examination, the federal police estimated that he probably kept others in his luxurious Mar-a-Lago residence.

FBI agents conducted a spectacular search there on August 8 on the basis of a warrant for “withholding classified documents” and “obstructing a federal investigation”, and seized about thirty other boxes.

An intense legal battle then opened to determine the nature of the documents seized (classified? personal? declassified?) which slowed down the procedure but, here again, a federal indictment remains possible.

At the head of the justice of the State of New York, the democrat Letitia James filed a civil complaint against Donald Trump, his children and his group, the Trump Organization.

She accuses them of having “deliberately” manipulated the valuations of the group's assets — which includes golf clubs, luxury hotels and other properties — to obtain better loans from banks or reduce its taxes.

She is seeking $250 million in damages on behalf of the state, as well as bans on running companies for the ex-president and his relatives.

The Manhattan prosecutor is investigating in parallel the criminal aspect of this case. Several members of the group have been charged and a trial began in late October. It does not directly concern the former president, however.

A Georgia state prosecutor has been investigating since 2021 “attempts to influence the electoral operations” of this southern state, won by a short head by Joe Biden in 2020.

In a telephone call, the recording of which has been made public, Donald Trump had asked senior local official Brad Raffensperger to “find” nearly 12,000 ballots in his name.

Fani Willis, prosecutor for Fulton County which includes Atlanta, has assigned a grand jury to determine whether he there was enough evidence to charge the real estate mogul. She has already managed to collect testimonies from those close to her, in particular from her former personal lawyer Rudy Giuliani.