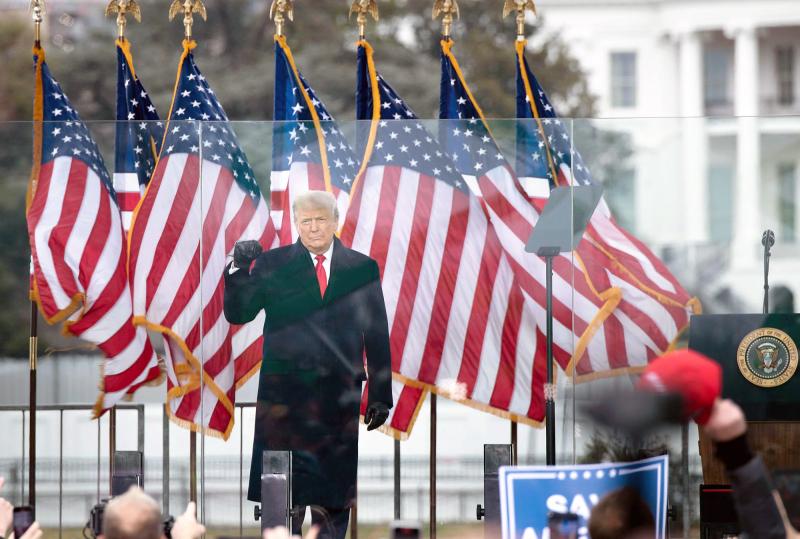 WASHINGTON | Donald Trump knew some of his supporters were armed when he called on them to march on Capitol Hill on January 6, 2021 and then sought to get behind the wheel of a limo to join them, according to damning testimony delivered to Congress on Tuesday. /strong>

Cassidy Hutchinson, a former collaborator of the White House, revealed before a parliamentary committee the precise actions of the former president during this day when American democracy trembled.< /p>

According to this young woman, Donald Trump tried to take the wheel of the presidential car from a Secret Service policeman to mingle with his supporters, who were marching towards Congress in an attempt to block the certification of Joe Biden's victory in the presidential.

“Take me to the Capitol”

“I am the fucking president, take me to the Capitol right now”, reportedly he said, trying to grab the policeman by the collar, according to remarks reported to Cassidy Hutchinson by the president's deputy chief of staff.

“Sir, you must take your hand off the wheel, we are going” the White House, the policeman would have replied.

This young woman, who worked just a few steps from the Oval Office, also gave disturbing details about what the American executive knew of the violence that was preparing ahead of “January 6”.

Which a conversation she allegedly had with Donald Trump's chief of staff, Mark Meadows, four days before the attack on the US Congress. “It could get really, really bad on January 6,” he allegedly said at the time.

“That night, I remember feeling fear and dread for the first time about what might happen on January 6th,” 2021, she said in a statement. testimony that could compel Mark Meadows to come out of silence to deliver his story.

On that cold day in January, thousands of Donald Trump supporters gathered in Washington to denounce the result of the election, lost by the Republican billionaire.

The parliamentary committee revealed on Tuesday that several people within this human tide were heavily armed, information transmitted at the time to Donald Trump.

“I don't give a damn if they're armed, they're not here to hurt me,” the president reportedly replied minutes before inviting them to “walk to the Capitol,” Ms. Hutchinson said, who distanced himself from the Trump nebula, before the parliamentary inquiry committee.

For nearly a year, this committee has heard more than 1,000 witnesses, including two children of the former President, and sifted through 140,000 documents to shed light on the precise maneuvers of Donald Trump before, during and after this event which caused a global shock wave.

Ketchup on the walls

These nine elected officials – seven Democrats and two Republicans rejected by their party – accuse Donald Trump and his entourage of being at the heart of an “attempted coup”.

Videos and testimonies at the support, they detailed throughout the month of June the pressure exerted from all sides by the billionaire to stay in power, until the assault on Capitol Hill by his supporters.

The episode of the presidential limousine was not the only outburst of violence by Donald Trump during the period when he tried to overturn the result of the election, according to testimony on Tuesday.

Cassidy Hutchinson also referred to the day of December 1, 2020, when the United States Minister of Justice Bill Barr declared in an interview that he had not found sufficient “fraud” to invalidate Joe Biden's presidential victory. The billionaire then allegedly threw a porcelain plate on the floor and threw ketchup on a wall of the White House, she said.

Donald Trump, who openly flirts with the idea of running for president in 2024, vehemently denounced all of these revelations.

“It's twisted and false, as is all of the commission's work,” he castigated in a series of publications on his social network Truth Social.

Sign of the deep political divide that divides America, his party, which Donald Trump still controls with an iron fist, has d have already promised to bury the conclusions of this commission if he were to take control of the House of Representatives during the mid-term legislative elections in November.