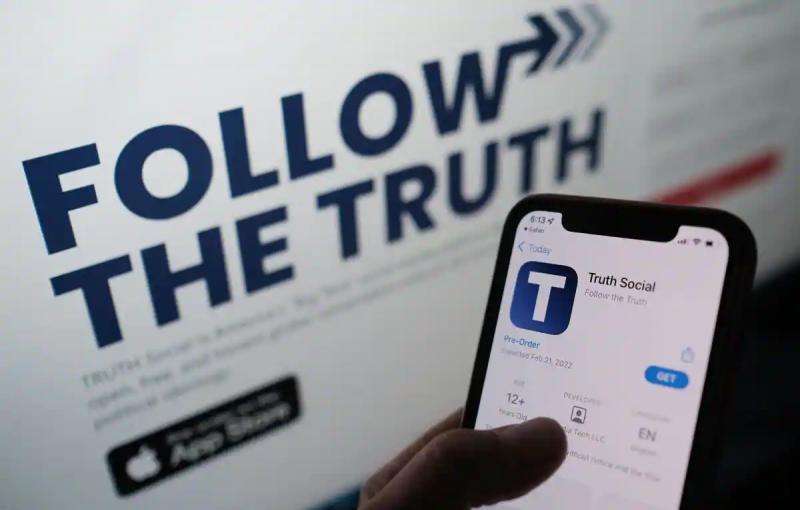 Donald Trump had designed his social network, Truth Social, with the objective of making it a forum for freedom of expression and the sharing of ideas without filters.

Six months later, a slew of conspiratorial messages relayed by the former tenant of the White House, following the search of his Mar-a-Lago home by the FBI, confirm the proliferation of QAnon ideas – a conspiratorial movement of extreme right – on the online platform.

Worse, a flurry of messages published by Trump on August 30 on his social network seems to indicate new affinities of the Republican tenor for the conspiratorial fringes of American society , almost two years after his presidential loss to Joe Biden.

That day, Trump went so far as to reshare on his account the response to a “meme” relaying QAnon content, a nebula encouraging conspiracy theories linking, for example, personalities from the American Democratic Party like Hillary Clinton to a Satanist network and pedophile.

“Trump has echoed these theories in the past on Twitter,” notes Mike Rothschild, author of a book on QAnon conspiracy theories, who positions Truth Social “in full MAGA (Make America Great Again), the favorite slogan of pro-Trump radicals.

With the approach of the American “midterms”, Truth Social nevertheless weighs less in terms of political influence than Twitter and Facebook at the time when the tribune had official accounts there, now closed.

First, Trump is struggling to gather crowds on his new platform, where he currently has just four million subscribers. He had 88.8 million on Twitter and 35.4 million on Facebook.

Then, Truth Social never really took off and found itself in a precarious financial position. In July, it had 1.19 million active users on iPhone, according to data provided by the specialized firm data.ai, in contrast to the 237.8 million daily users that Twitter presented in its last financial report.

“The reach of his messages is much less” on his platform, adds Mike Rothschild.

Refuge of the extreme

The former president had launched his platform in February as an alternative to traditional networks, after a ban from Twitter and a suspension of his Facebook accounts for two years, following the assault on Capitol Hill by his supporters on January 6, 2021. which he is accused of having encouraged.

The social network is accused of relaying false information and promoting QAnon ideas pushing certain platforms to be wary.

< p>Google, for example, decided last week to ban the download of the application on Google Play, for lack of sufficient moderation.

NewsGuard, which rates news sources by their trustworthiness, found 88 accounts sharing QAnon content with more than 10,000 followers on Truth Social, more than half of whom were “certified” by Trump, and more than one. third parties had been banned from Twitter.

Too little to discourage users of the platform, who are mostly “Trumpists”, explains David Thiel, researcher at the Stanford Internet Observatory. And too bad for the ultimately relative impact of this tool.

“Even if Trump has this megaphone that allows him to draw attention to any crazy news, the impact it will have will be a fraction of the impact it would have on Twitter or Facebook,” says Jared Holt, a research administrator at the Institute for Strategic Dialogue, an independent counter-extremism lab based in London.

For Caroline Orr Bueno, a researcher at the University of Maryland , “Donald Trump's staunchest supporters will follow him no matter where he goes.”

“So even though these messages reach a smaller number of people, those who continue to follow him represent a share of its more extreme and more violence-prone electorate,” she adds.

Content posted on Truth Social is also regularly reposted on other sites popular with the core of its electorate such as Telegram and far-right forums, as well as members of the Republican Party.

Truth Social does not did not immediately respond to questions from AFP.