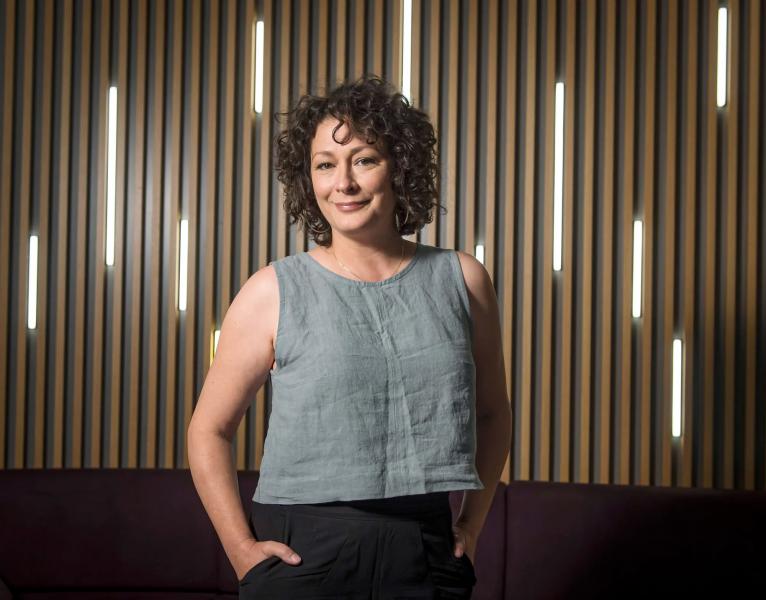 Anick Lemay had the privilege of being born in the very early 1970s, a decade marked by a diverse and stimulating youth offering on television. Because of her love for cartoons, the actress could chain hours in front of the small screen. A great joy!

Anick, what are the children's shows that have marked you?

All the cartoons! Heidi, Candy, Little Beaver, Demetan and also The Satellipopettes, em>The 100 turns of Centour, Picotine, Fifi Longstocking, Bobino and Bobinette, Fanfan Dédé, Sol et Gobelet and the unmissable Fanfreluche! We had variety in the 1970s!

What are your fondest childhood TV memories?

On Saturday mornings, our parents and our youngest sister slept long, so my older sister and I listened to all the cartoons while eating cereal, not milk! Three hours of uninterrupted, easy bliss!

Would you say you watched a lot of TV when you were very young?

Still, yes. Like after school and on Saturdays. At home, we have always been big fans of television.

My blue flower side definitely comes from Candy, my tomboy side from Pippi Longstocking, my love for stories and my taste for reading comes from Fanfreluche [Kim Yaroshevskaya brought stories to life for three seasons at Radio-Canada, Ed]. So yes, I was influenced in a good way!

Is there still a theme song from a show that sticks in your mind?

All of the shows I've listened to!

I still dream of personifying Fanfreluche. With the technology we have now, imagine how “flyy” it could be. ! And it would make children want to read. (smile)

What world did you want your daughter Simone, now 14, to discover?

< p>I infected my daughter with Japanese anime since she was very young. I also have the two sets of Sol et Gobelet that we look at at the chalet. But as a child, she was more drawn to princess movies. Then it changed to dragon anime to Harry Potter and now Stranger Things.

♦ Anick Lemay will be one of the faces of the new comedy Looks good, which is currently being filmed and is to be unveiled in winter 2023 by Télé-Québec. She will therefore be part of the same cast as Antoine Olivier Pilon, Catherine St-Laurent, Joakim Robillard, Noémie Leduc-Vaudry, Marc Béland, Denis Bernard and Sylvie Moreau, among others.

SPIDER-MAN: AWAY FROM HOME

THE OTHER MIDI AT THE NEXT TABLE

Drama by Guy Ritchie starring Hugh Grant, Charlie Hunnam and Matthew McConaughey. When an American kingpin, based in London, announces his retirement, the main figures of the local underworld compete to succeed him.

To mark the death of Pierre Marcotte, TVA is rebroadcasting this episode featuring the famous host , which was received by host Jean-Philippe Dion along with Véronique Hivon and Pénélope McQuade.