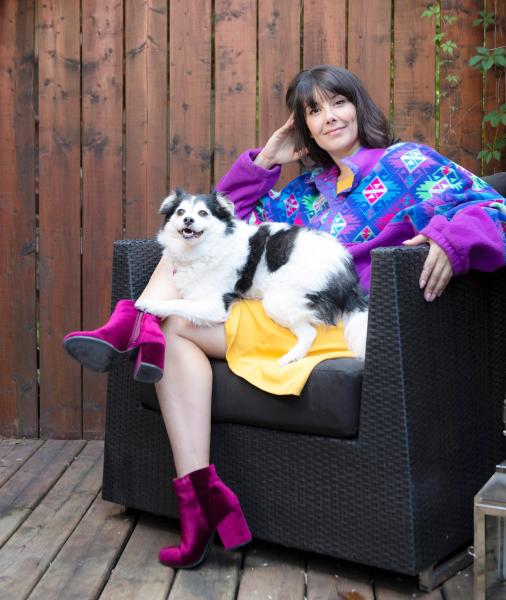 It was on stage that Joëlle Lanctôt revealed herself to the public in 2016, defending the role of Mary Poppins in the musical of the same name. However, before living unforgettable moments in show, she was transported by the small screen.

Around the age of 4, I was freaking out on Enfanforme. I was mesmerized by the big fruit decor… I was so excited for them to use the famous cherry trapeze, but it never happened. I still blame Joël Legendre and Élyse Marquis a lot for the false hopes… (laughs)

Which childhood TV memories are among your most beautiful?

Saturday mornings were bowl of cereal and Bulldog Bazaar. It was the best moment of my week. The best cartoons were there, one after the other, and the animators really made me laugh.

Too many. My mother even had to intervene! (laughs)

All the characters of Télé-Pirate[played by Guy Jodoin, Élyse Marquis and Christian Bégin, Ed]! I loved their nonsense. This show completely marked my generation. Today, it's still very much my kind of humor… and I admit to secretly dreaming that one day, I'll be asked to play in such a crazy television project.

Is there still a song from a show that sticks in your mind today?

“The beauuuu Andyyy likes another one than me… Ah yes, I I'm going to cry all night” [clip from Bouledogue Bazar, Editor's note]. Greetings to France Parent, idol of the 10-year-old Joëlle Lanctôt.

Is there a character that you would have liked to play for children?

All sketch shows such as Tele-Pirate and company must be a great playground for an actor. But at 4 years old, if I had been offered to play the letterbox of Nathalie's Village, I would probably have felt like reaching the pinnacle of my career.

Which TV world would you like children to discover?

My friends Pascal Morrissette, Pascal Barriault, Marilou Morin and Valérie Chevalier do an incredible job on Cochon dingue. I think I would have been very proud if my children grew up tripping on them!

What do you think of today's children's TV?

Growing up in front of beautiful characters, who teach us things, who accompany us in our psychosocial development and who stimulate the imagination, it's super important. We must continue to shine the creativity and the talent that we have here, in Quebec, both at the level of the scriptwriters and the actors, by pushing crazy projects, which come out of the box.

Like Lunou Zucchini, Rémi Chassé, Tommy Joubert and Manuel Tadros, Joëlle Lanctôt shines on stage during the time of the musical Rock of Ages< /em>, a work edited by Joël Legendre and presented on the Capitole de Québec stage until August 7.