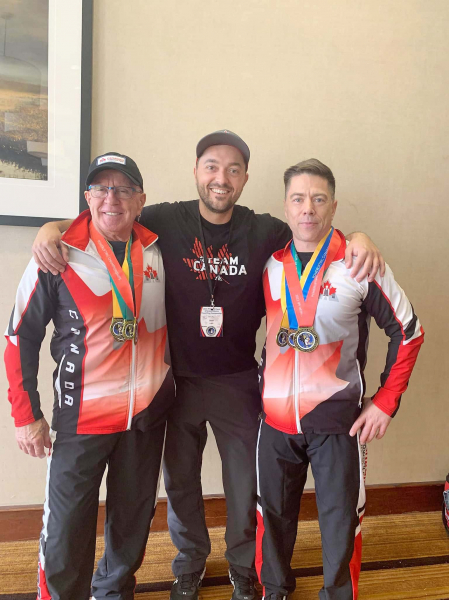 Chased from their gym which had to close during the pandemic, two Beaucerons used their resourcefulness to be able to continue their training and their efforts paid off as they climbed the first step of the podium at the World Powerlifting Masters Championship.

Bernard Vachon and Jean-Sébastien Rhéaume wanted to continue training despite the closure of the Fitness Centers in anticipation of the world championships which took place from October 8 to 15 in Saint-Jean, Newfoundland.

“You had to find a hole to practice,” explained Vachon, who won gold in squat (leg curl), deadlift (deadlift ) and the total of the three events. He also won bronze in the bench press. We bought equipment and we started in a garage before renting a place with four, five guys. »

Introduced to powerlifting at the end of 2016 during a period challenge of his life, Vachon won his first world title less than two years later in Calgary where he achieved world records in the squat and deadlift with loads of 206.5 kg and 235 kg respectively. Vachon left Alberta with three gold medals.

“For 45 years, I had been training like everyone else in a gym when I squats for the first time, says the 66-year-old man who competes in the Master 3 category ( 60 and over). This is where the adventure began.

His motivation went down a notch when he went through a more difficult time on a personal level.

“At work, I didn't let myself be crushed on my feet, which was good, but also not so good,” he explains. I separated from my girlfriend and I had a few depressions. My morale was at zero and I no longer had the energy to train. The sport allowed me to kick my ass and I discovered enthusiasts who gave me the bug of powerlifting.

“If you have a passion in life, it motivates you to face the challenges, to pursue Vachon, who retired in 2021 after 47 years at Manac. Sport makes it easier to get through hardships. »

“If I can succeed, anyone can do it,” he emphasizes. The pandemic has been difficult and several young people have given up on the sport. I would like to go to schools to give motivational talks so that young people do not give up on sport. »

Vachon does not intend to participate in the next two world championships due to long travels.

“It is not in the plans to go to Mongolia and South Africa in 2023 and 2024, but I want to continue to compete occasionally to keep in shape and I want to show my sports, he says. In the company of my trainer Dave Roy, we think of the worlds of 2025 when I will find myself in the Masters 4 (70 years and over). It is not yet known where the championship will take place. If my expenses do not drop too much, my coach tells me that I will still be among the best in the world. »