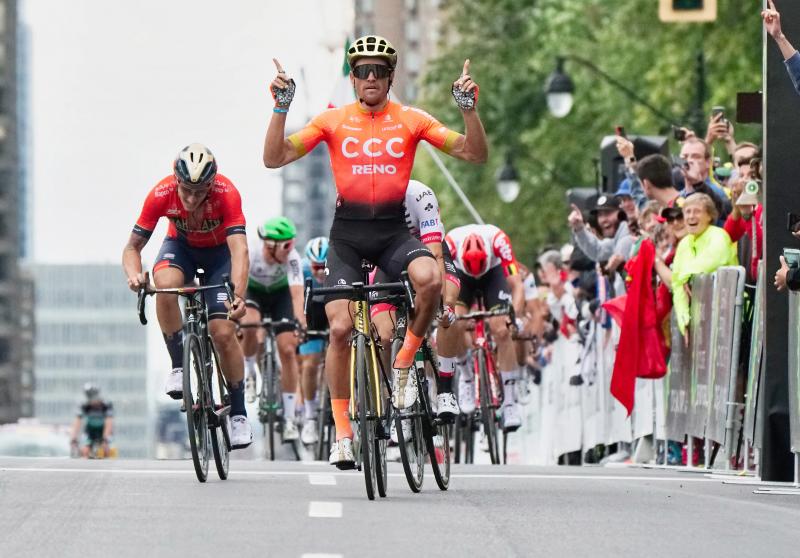 Experience and passion will clash in less than three weeks at the Grands Prix Cyclistes de Québec and Montréal, while Belgian Greg van Avermaet will have his compatriot Wout van Aert in his hands as a serious contender for victory.

Always successful in Quebec, van Avermaet is the title holder on the Mont-Royal circuit, but the last race dates back to 2019.

Two days earlier, he had also finished third in the national capital . Pandemic or not, the cycling world has turned a lot since then and the Belgian has welcomed the presence of several new talents.

Since 2010, the former Olympic champion has accumulated a total of nine podiums, including two victories in Montreal in 2016 and 2019. At 37, he knows that time is against him.

In eight participations, he has four second places and two third positions near the Château Frontenac without ever winning. Despite everything, he still believes that the Quebec circuit is better suited for him.

“It's really good that it's back on the schedule. The runners are happy. It is special because we have been driving well in Europe for two years, but not on the other continents. It's good for me too. I have always had good results, but it will be complicated for me even if I have confidence, ”he explained to local media a few hours before starting the 36th Tour of Germany.

After ruminating for several days over the decision of his AG2R Citroën team to drop him from the Tour de France after eight consecutive participations, van Avermaet got back on track by finishing third in the Tour du Limousin last week.< /p>

“I was really disappointed. It was not easy for me and I did not understand. I looked for new motivations. I did some good training and I got back to my normal level. »

As much in Quebec as in Montreal, the man to beat should possibly be Wout van Aert, 27, who has literally flew over the last Tour de France. No matter the terrain, he can do it all on one bike.

Winner of the points classification, the price of combativeness, three stages and wearer of the yellow jersey for four days, the other Belgian of the Jumbo-Visma has announced his presence in Canada as he aims for the title of world champion in Australia shortly afterwards.

“Racing really suits Wout van Aert. These are great races for him. It will be his first time in Canada and he will be one of the main favorites. I think [Tadej] Pogacar will also be there with [Michael] Matthews, ”added his opponent.

Dutchman Dylan Groenewegen, winner of the third stage of the Tour de France, also had to be in Canada since he will participate like several others in a race in Maryland on September 4. The full entry list should be announced soon.

The events will take place on September 9, in Quebec City, and September 11, in Montreal. Apart from a stay in the United Arab Emirates in February, the World Tour circuit has not left Europe in 2022.

Confident of getting the 2026 Worlds in the metropolis

The president of the Grands Prix Cyclistes seems more and more convinced to attract the world championships to Montreal in 2026.

Normally, the announcement of the host city should take place a few days after the Quebec races, at the next Worlds in Wollongong, Australia, from September 18 to 25.

“If we are still optimistic, positive? 200%,” launched Sébastien Arsenault on Tuesday.

And if ever he is in the secret of the gods, the big boss has still remained cautious.

“We consider that all the work has been done for years, decades. I am convinced that if Montreal comes out on top, I have no fear that it would be one of the finest sporting events for Quebec and the country, but also one of the finest championships in the world. »

Although Greg Van Avermaet may not be in the peloton in four years, he also believes that the organizers have good chance of getting the event.

“I think it's really a perfect course to organize world championships. »

On September 9 and 11, the organizer is expecting a good crowd, especially with the presence of Hugo Houle, winner of the 16th stage of the Tour de France on July 19. The leaders thought of honoring the Quebec cyclist, but the latter, always in optimal shape, wishes to limit distractions in order to offer a great performance. Houle could even remain discreet until the pistol shot.

Guillaume Boivin, Antoine Duchesne and James Piccoli should also animate the race . Canadian road champion Pier-André Côté will be in Quebec with the Canadian team. A few other hopefuls will be added. Best climber of the Montreal Grand Prix in 2019, Nickolas Zukowsky will possibly be absent this year.

Without a chartered flight to Quebec City's Jean-Lesage airport, most riders will be transported by Air Transat and Air Canada to Montréal-Trudeau on Tuesday, September 6 around 12 p.m. The peloton will then head to the national capital at the Delta Hotel in the late afternoon.

Regardless of the pitfalls encountered over the past two years, Sébastien Arsenault promises a very high quality line-up .

“There were a lot of complicated things, you have to be honest. We are convinced, like every year, that we will have a very, very large peloton. »