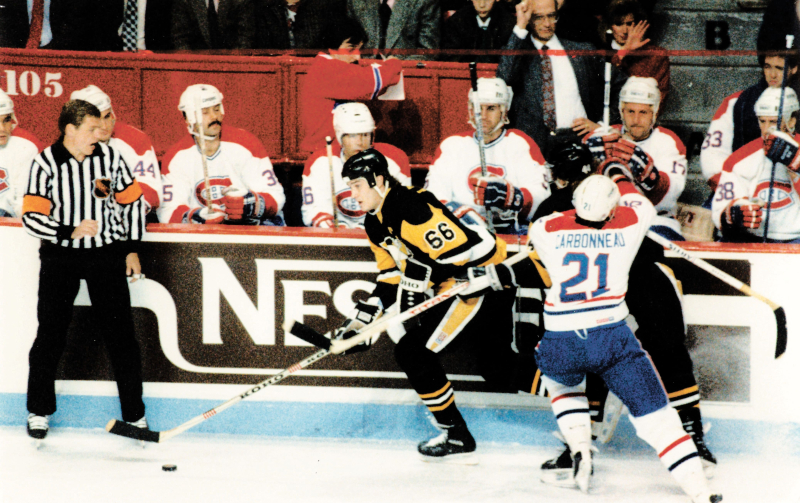 A great story of December 31 is that of 1988 and it takes place in the old Igloo of Pittsburgh, where a big guy from Ville-Émard is already at the peak of his career.

Mario Lemieux just turned 23 and his instructor, Gene Ubriaco, practically uses him on two lines. In the team, besides the Magnificent, there is another big star and it is Paul Coffey.

The others are average players, but who become very efficient as soon as they skate with the big 66. It was long before the Jagrs, Recchi or Crosby.

On this last evening of 1988, it is already a party in the building. The supporters are more and more numerous and we snatch the tickets to see the evolution of the phenomenon which demonstrates a unique talent, never seen.

That evening, the Penguins welcomed the poor Devils of New Jersey who were hanging out in the slums of the circuit, and it will be a festival of goals, with the game could not be more open.

Mario was going to achieve what will probably never be repeated in history of NHL hockey.

The big one participated in all of his team's goals. He had three assists and he scored five himself.

And what's quite unique is that none of these nets were strewn under identical conditions.

Mario will then get a penalty shot. It will count.

End of the game, it's seven to six for Pittsburgh; Devils coach Jim Schoenfeld pulls out his goalie and Mario throws into the empty cage.

Thus ends this story, whose epilogue is worth noting.&nbsp ;

Thirteen years earlier, in 1975, Montreal, Quebec and even Canada trembled with fear.

The Red Army club of the USSR was intended to spoil the day of the Year of the mighty Canadians in their temple, the Montreal Forum.

It was December 31, just over three years after the great Series of the Century won by Canada, but narrowly.

We thought that if the best players in the NHL together had had so much trouble defeating the USSR, the Montreal Canadiens, as dominant as they were, still had no Phil Esposito, Paul Henderson or Brad Park in their lineup.

Several will say that the Red Army-Canadian match of December 31, 1975 was one of the most exciting in the history of the Forum.

Montreal's best were all there and the same could be said for the Soviet side. A meeting that gave way to talent, strategies, speed, respect.

A very great match where Scotty Bowman's men gave everything they had in their stomachs on offense and defense with a “Big Three” at the top of his game.

Only 13 shots on Dryden

For the Canadians, Steve Shutt, Yvon Lambert and Yvan Cournoyer managed to beat Vladislav Tretiak, who had been extraordinary, prodigious, with 35 saves during the game, including 16 in the third period.

Tretiak and Yvan Cournoyer had been chosen among the players of the match, and it was that evening that instructor Viktor Tikhonov declared that Bob Gainey was the most complete hockey player in the world.

In that eight-game series the Soviets came to play against NHL teams, they drew in Montreal, they were savagely beaten by Philadelphia (a dangerous and overly rugged encounter) and Buffalo.

When the Washington Capitals are on the power play, 96% of the time Alex Ovechkin is on the ice.

It's been over a year since Sean Couturier >, of the Flyers, did not play a single game. He has had two back surgeries in less than 10 months, the last of which was last October. Maybe a return next March.

The Quebec Remparts are having a dream season with only five losses in regulation time in 33 games since the start of the season. The addition of Simon Gagnéas an assistant coach to Patrick Roy must certainly not hurt.

Ryan Hugues, brother of Kent (general manager of the Canadiens), was drafted in second round by the Quebec Nordiques in 1990, but he never broke into the NHL. In 1995, he played three games with the Boston Bruins…period.

Defender Alec Martinez(Vegas) is in a class of its own with its 132 blocked shots since the start of the season. His closest competitor is Jacob Trouba (Rangers), who has 88. At the Canadian, Joel Edmunson dominates the team with 79.

Eight Quebecers play for the Syracuse Crunch, a branch of the Tampa Lightning. The big boss of the organization, Julien Brisebois, does not hesitate to hire people from here. His deputy is Mathieu Darche. And Benoit Groulx leads the American League team with his assistants Gilles Bouchard and Éric Veilleux. Jean-Philippe Côté, former Canadian and son of Alain, works in the development of young Lightning. Bravo, Julien.

In addition to Maurice, Henri and now Anthony, two other Richards have played in the NHL: Jacques and Jean-Marc, with the Nordiques.

Fishing fish in the channels at Sainte-Anne-de-la-Pérade has begun. Live an unforgettable experience, everything is provided. If you don't want to keep the catches, the edible fish left on the premises will be picked up by your outfitter and then sent to the Moisson Mauricie food bank.

In a friendly match among the 60 and more, the Jap's Band of La Prairie beat the Gerihatricks 7 to 4. It smelled of Antiphlogistine in the locker room.