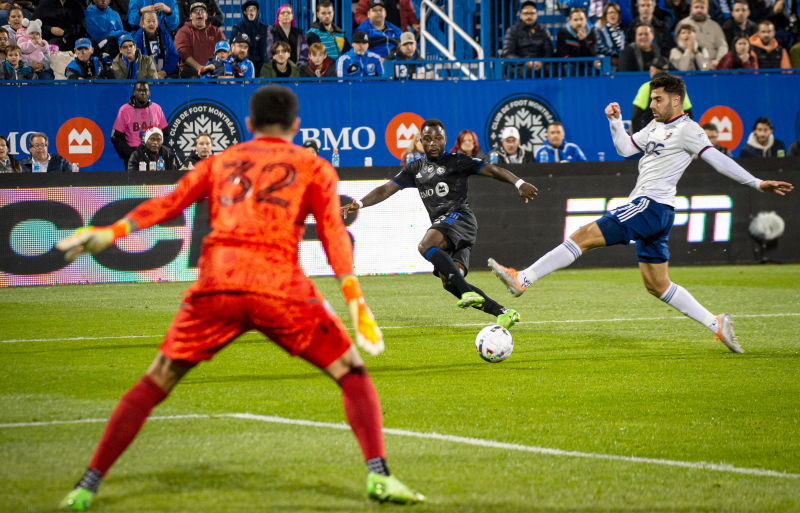 CF Montreal took advantage of its last home game to offer a 1-0 victory over D.C. United to the 19,619 fans present at Stade Saputo, another full house.< /p>

James Pantemis had to make some big saves to get his shutout and Gabriele Corbo made a save on the goal line.

The only goal was scored in the 41st minute. Zachary Brault-Guillard's low cross was deflected into his goal by Donovan Pines in the middle of a slide. An own goal was allowed.

Even playing with one less man since Pines was sent off following a foul on Koné, D.C. gave the hosts a bit of a scare scoring with less than five minutes to go.

Fortunately for the Montrealers, there was an offside.

We have mentioned it many times, CF Montreal is assured of second place in the Eastern Conference, but this victory combined with a Philadelphia Union's stinging 4-0 loss against Charlotte keeps things interesting for the final weekend.

Indeed, the Montrealers now have 62 points, two less than the Union.

Another layer of interest, Toronto FC will be the Union's last opponent next Sunday at home while the Bleu-blanc-noir visit Miami.

Wilfried Nancy's men will therefore be playing for something at the last game of the season, but it will be for first place rather than a playoff spot. It's refreshing.

Also note that the team has an enviable record of 10-1-3 in its last fourteen games.

The club announced before the match that Romell Quioto was out of uniform due to a thigh injury. This leads us to an observation, he often returns injured from his stays with the Honduras selection.

We will have to hope that this injury is not serious because he is the top scorer in the team this season with 15 goals in 30 games. His presence will be essential in the playoffs.

Another tile, Joel Waterman was injured at the end of the game following a heavy contact with Christian Benteke. He finished the match, but collapsed to the ground at the final whistle and received treatment.

We had to be patient, very patient even to collect post-match comments from Wilfried Nancy, who appeared before the media more than thirty minutes after the end of the match.

S' he took so long to make his way to the press room, it was because he spoke to his men in the locker room.

“I took the time to talk to my group, it was important to speak with my players to tell them what they have been doing since the start. »

“We're going to make the playoffs, but it's only four games. The most important thing is what we do over 34 games and our consistency. Nineteen victories in MLS is strong. »

The Instinct of the Killer

Since it is a question of consistency, we can emphasize that the team often ended the meetings in a way slightly tight, bending without breaking. This was the case again on Saturday night, as D.C. put pressure to tie the game, while the locals should have folded the game long before.

“We were able to keep the score, it's not easy, despite the fact that they were at ten towards the end, underlined Ismaël Koné. There are elements of the game that need to be better, we need to kill the game much earlier in the second half. »

« The game could have ended 4-0 if we had been sharp. These are aspects on which we will work.

This victory puts CF Montreal within two points of the Philadelphia Union and first place in the Eastern Conference.

Philadelphia in the lead

“We're not focused on Philly, we're focused on us. Maybe my teammates knew they had lost, but I didn't, I preferred to focus on my match,” Koné insisted.

Following Koné in front of the media, Rudy Camacho however indicated that he had taken good note of the situation.

“We have a chance so we will play it hard. We are going to play for first place in Miami hoping that they [the Union] make a poor performance against Toronto.

Romell Quioto was out of uniform due to a thigh injury. Crossed near the press box, he seemed at ease. Wilfried Nancy said he did not know more for the moment.

“He was injured in selection. We are waiting to see a bit. I hope it won't be too long and that he will be available for the first game of the playoffs. »

As for Joel Waterman, injured at the end of the match, Nancy mentioned that he had received a blow, that he had a bruise, but that he expected it not to be not serious.