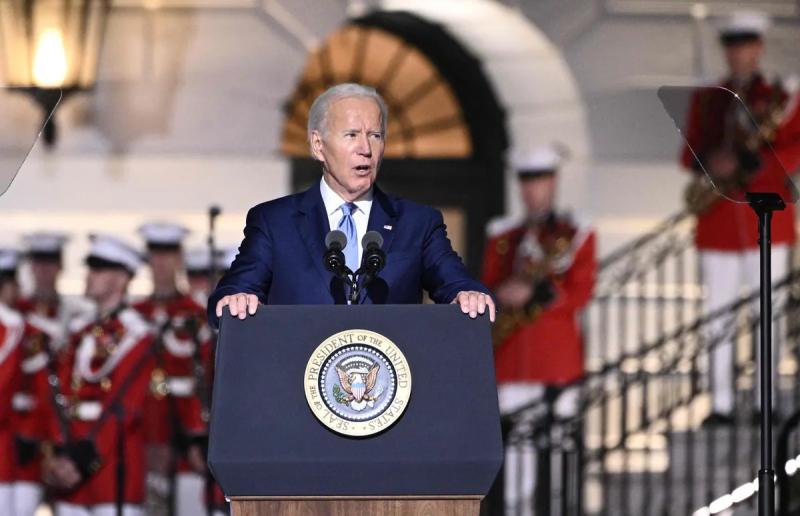 Joe Biden has assured that the United States and its allies will impose new economic sanctions “swift and severe on Russia” if it annexes territories in Ukraine during the “referendums”, which continue on Saturday .

“Russia's referendums are a sham, a pretext to try to annex parts of Ukraine by force,” the US president denounced on Friday evening.

Previously, in a joint statement, the G7 countries (Germany, Canada, United States, France, Italy, Japan and the United Kingdom) had called on “all countries to unequivocally reject these fictitious referendums”, “simulacra” which “have no legal effect nor legitimacy”.

Without going so far as to denounce the elections, China, the closer to Moscow, nevertheless went there with her criticism, calling for respect for “the territorial integrity of all countries”.

Russia has begun pushing votes in its “referendums” to annex Ukrainian regions it wholly or partly controls. Voting, which began at 5 a.m. GMT on Friday, will end on September 27 in the separatist regions of Donetsk and Lugansk (east) as well as in areas under Russian occupation in the regions of Kherson and Zaporizhia (south). /p>

Hundreds of polling stations were to be opened in the four territories, and others must be opened in Russia to get displaced people to vote.

In Moscow, St. Petersburg and other cities, authorities staged demonstrations in support of the votes with flags and slogans.

“These referendums are a step towards this peace,” said Viktor Suvorov, 40, present at the Moscow rally, a stone's throw from Red Square.

In Ukraine, in Shevchenkové, the Ukrainian leader Andriï Kanachevitch protested to AFP against “illegal” polls. “Nonsense,” he said.

“Signs of torture” in Izioum

On the side of the UN, a commission of inquiry has recognized that “war crimes have been committed in Ukraine”, referring in particular to Russian bombardments on civilian areas, executions, acts of torture, ill-treatment as well as sexual violence.

Ukraine has also announced that it has exhumed 447 bodies from a mass burial site in Izium, a town recaptured from the Russians in the northeast, including 30 showing “signs of torture” such as tied hands, broken limbs or “amputated genitalia”.

On the diplomatic level, Iran has found itself in the crosshairs of the Ukrainian authorities, who blame it for its arms deliveries to Moscow and in particular drones, which killed one person in a Russian attack on the port of Odessa on Friday. .

Lambasting “hostile” behavior, Kyiv decided to withdraw accreditation from the Iranian ambassador to Ukraine and to “significantly reduce” the staff of the Iranian embassy in Kyiv.

On the ground, Ukraine claimed responsibility for taking Yatskivka in the Donetsk region (east) on Friday. It also claims to have advanced south of Bakhmout, a locality in the east, which the Russian army has been trying to take for months without success.

On the side of the separatists, the head of Donetsk, Denis Pushilin, spoke of an “extremely difficult” situation north of his city.

In the Lugansk region, another separatist official, Andrei Marochko, reported on Ukrainian bombardments, noting that Kyiv forces “want to do everything to derail the referendum”.

The hasty announcement of these elections was accompanied by that of Vladimir Putin on Wednesday, where he decreed the immediate mobilization of at least 300,000 reservists. The Russian president also threatened to use all of Russia's arsenal, which includes nuclear weapons.

This mobilization continued in Russia, the Kremlin seeking to counter the advances of the Ukrainian army which, strengthened by Western arms deliveries, claimed new territorial advances on Friday.

On this subject, Mr Zelensky called on all Ukrainians who find themselves in the territories occupied by the Russians to “go into hiding to escape Russian mobilization” and, if they cannot escape, to “sabotage all the enemy”.

While television broadcast almost no images of the mobilization, several videos on social networks showed men closed-faced boarding buses after hugging loved ones, some in tears.

Reached by AFP, Konstantin, 29, said he received his summons at his parents' home. “I'm still in shock,” he said. “I'm not going to hide, but I'm not jumping for joy either.”

Others were handed summons after being arrested during demonstrations against the mobilization on Wednesday. < /p>

“I expected the usual [procedures]: the arrest, the police station, the court. But to hear oneself say: “Tomorrow, you are going to war” […] that was a surprise”, told AFP Mikhaïl Souetin, 29, who refused to sign the document.< /p>

The announcement of the mobilization also prompted many Russians to leave the country, causing an influx at the borders, without it being possible to quantify the extent of the phenomenon.

Finland has decided to take measures to “significantly” limit the entry of Russian citizens on its soil while the Baltic countries and Poland have already been drastically curbing entry for weeks.