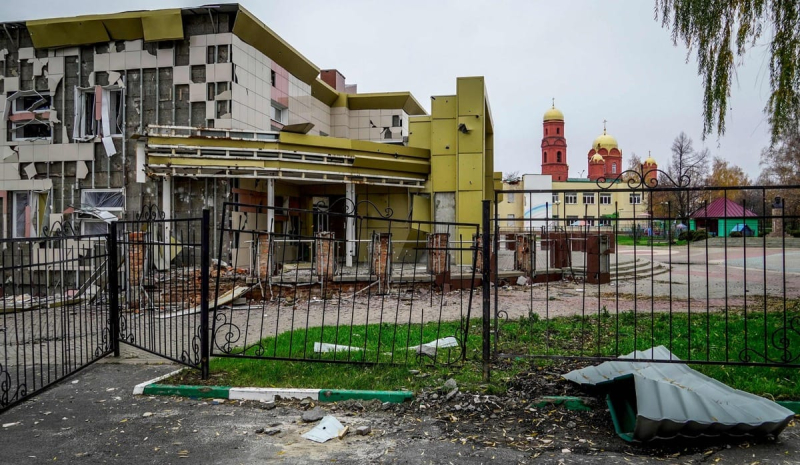 The European Commission proposed on Wednesday to work on the creation of a special tribunal to try “Russia's crimes” in Ukraine and on solutions to mobilize frozen Russian assets in order to rebuild this country, two undertakings which promise to be difficult, however.

At the same time, on the ground of military operations, Russian forces are keeping up the pressure to try to seize Bakhmout, a city in eastern Ukrainian territory in the vicinity of which fighting has been raging since summer.

“The enemy continues to concentrate its main efforts on the conduct of offensive actions in the Bakhmout sector”, thus reported at the end of the afternoon the staff of the Ukrainian army.

The Russians had shortly before claimed the capture of three villages near this city which had 70,000 inhabitants before the war and which is today largely destroyed.

This battle has taken on an even greater importance more symbolic for Moscow than the conquest of Bakhmout, with the support of the paramilitary group Wagner, would come after a series of humiliating defeats, with the retreats from Kharkiv (north-east) in September and Kherson (south) in November.< /p>

An employee of the Ukrainian embassy in Madrid was also slightly injured on Wednesday by the explosion of a letter bomb intended for the ambassador, leading Kyiv to order a reinforcement of security in all its diplomatic representations.

“While continuing to support the International Criminal Court (ICC, headquartered in The Hague), we propose to establish a UN-backed special tribunal to investigate and prosecute Russia's crimes of aggression against Ukraine, said the President of the European Executive Ursula von der Leyen, in a video posted on Twitter on Wednesday.

A proposal that must be presented to member states for discussion.

The creation of such a tribunal has been called for on several occasions by Ukrainian President Volodymyr Zelensky, as well as by the Baltic countries.

“This is exactly what we proposed for a long time”, welcomed the chief of staff of the Ukrainian presidency, Andriï Iermak.

The ICC only has jurisdiction over war crimes and crimes against humanity committed in Ukraine and not over Russia's 'crimes of aggression', as Moscow is not a signatory to the Rome Treaty establishing the Court .

This could not judge Russian President Vladimir Putin, his Prime Minister and his Minister of Foreign Affairs, who benefit from immunity from prosecution during their mandate, notes the Commission. “An ad hoc tribunal with jurisdiction over crimes of aggression would allow the prosecution of Russia's most senior leaders who would otherwise enjoy immunity,” she continued in a preliminary document.

The Netherlands , which already host the ICC in The Hague, have indicated their availability to host a special tribunal.

But to set up such a court, broad international support will be necessary, recognizes the Commission. If the proposal has no chance of passing the UN Security Council due to Russian opposition, it may have more resonance in the General Assembly.

Officials of the Commission says that it has had initial contacts with the United States – which is not a party to the ICC – in this regard, but no indication has been given of any support from Washington.

The Europeans also want to talk with their partners, particularly within the G7, about their desire to make Moscow pay for the material destruction in Ukraine.

“Together with our partners, we will ensure that Russia pays for the devastation it has caused, using the frozen funds of the oligarchs and the assets of its central bank,” Ursula von der Leyen said.

< p>EU member states have already frozen 19 billion euros of assets belonging to Russian oligarchs and some 300 billion euros of Central Bank of Russia reserves are blocked in the EU and other countries of the G7.

With regard to public assets, the Commission proposes to create “a structure to manage these funds and invest them”. The revenue thus generated could be used directly for the reconstruction of Ukraine.

Once the sanctions are lifted, these central bank assets should be returned but they could “be linked to a peace agreement providing for 'compensate Ukraine for the damage suffered'.

As for the assets of the oligarchs which have been frozen, their confiscation would only be possible in connection with a criminal offence. The EU is in the process of harmonizing the laws of its Member States in order to uniformly punish the circumvention of sanctions, which could serve as the basis for such a measure.

More than 20,000 civilians and more than 100,000 Ukrainian servicemen have been killed or injured since the start of the invasion of Ukraine in February, the EU chief said.

The damage suffered by Ukraine is , according to her, valued at 600 billion euros.