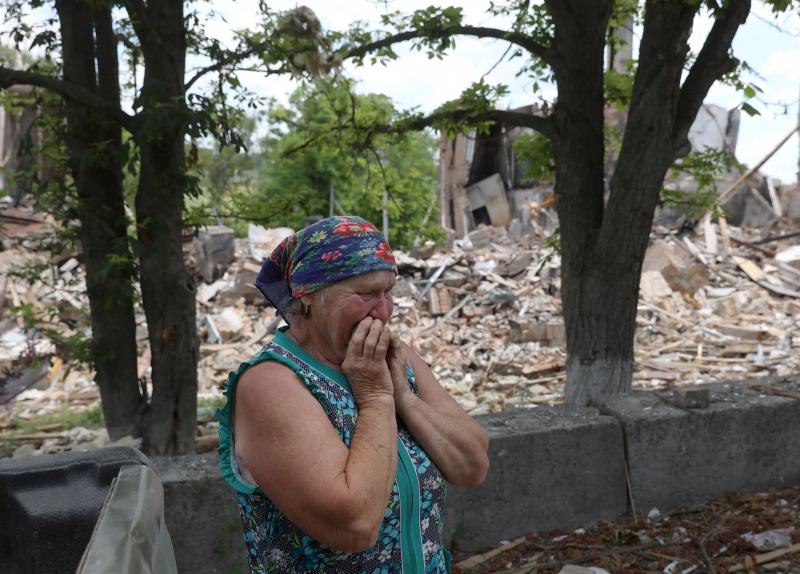 LYSSYTCHANSK | The Russian offensive on the Donbass continues unabated according to the Ukrainian authorities, who on Tuesday reported “catastrophic destruction” in Lyssytchansk, a neighboring town of Severodonetsk, where nearly 570 people are now entrenched in the Azot chemical plant.

On the diplomatic level, Moscow has further raised its voice against Lithuania by promising it “measures” with “serious negative consequences” for its population, after Vilnius had introduced during the week -end of restrictions on the transit by rail of goods hit by European sanctions in the direction of Kaliningrad, a strategic and militarized Russian enclave on the Baltic Sea.

In the military theater, the governor of the Lugansk region (east), Serguiï Gaïdaï, reported in the morning of “fights (in progress) in the industrial zone of Severodonetsk” and “catastrophic destruction in Lysytchansk”. p>

According to him, “the last 24 hours have been difficult” for the Ukrainian forces and “the strikes on the (three) bridges connecting Severodonetsk and Lysychansk already destroyed” continue, further cutting off the first of these two cities of around 100,000 inhabitants. from the rest of the territories controlled by Kyiv.

Earlier, Mr. Gaïdaï had declared on Ukrainian television that 568 people, including 38 children – mainly factory employees and their families, according to him, were now refugees inside the Azot factory.

The factory is emblematic of this industrial city which had around 100,000 inhabitants before the war and of which Kyiv still claims to control around a third. The capture of the city by Moscow would be an important step towards the conquest of the entire Donbass, a mainly Russian-speaking region partly held by pro-Russian separatists since 2014.

The front is getting closer

“The Russians want to completely conquer the Lugansk region”, which they already control almost completely “before (Sunday) June 26”, affirmed Mr. Gaïdaï, “but they do not will not arrive in five days”.

Undergoing daily bombardments, the region has for several weeks been the scene of violent artillery battles between Russian and Ukrainian forces. Ukrainian President Volodymyr Zelensky has urged the Ukrainian military to “hold on,” judging that the outcome of the war will depend on its resistance and ability to hold back the Russian military and inflict casualties on it.

Several towns in Donbass still under the control of Kyiv are nevertheless preparing for an advance by Russian troops, such as Sloviansk and Kramatorsk, east of Severodonestk. “The front has come closer in recent weeks, up to 15-20 kilometers”, explained to AFP Vadym Lyakh, mayor of Sloviansk, who hopes for the rapid arrival of “new weapons” including the Ukrainian army. need.

“So far, everything is fine here, but it's very hard psychologically when you see on television what is happening in other cities,” says Svitlana, 48 years old, butcher at the Kramatorsk market.

In the south of Ukraine, “specialists from the transmission units of the Russian Armed Forces connected and reconfigured to broadcast Russian channels the last of the seven television transmitters in the Kherson region”, conquered by Moscow from the first days of the war, according to a press release from the Russian Defense Ministry.

According to the text, one million inhabitants of the region now have “free” access to the main Russian channels, in particular those of the group of VGTRK public broadcaster, which actively relays the Kremlin line.

Since the region came under the control of Moscow, the occupying forces have been carrying out a policy of Russification of the territories there: the Russian currency, the rouble, has been introduced and Russian passports are beginning to be distributed.

< p>According to the Russian public news agency TASS, one of the new pro-Russian officials of the Kherson region, Kirill Stremoussov, said that this territory could be attached to Russia, “by referendum”, “before the end of the year”.

Ukraine's police chief for Kyiv province said on television that the bodies of 1,333 Ukrainian civilians he said were killed by Russian forces had been found as of Tuesday, 213 of whom remain unidentified. Since Russian forces withdrew from the area, 300 people remain missing, he added.

In Oslo, the Nobel Committee congratulated Russian journalist Dmitry Muratov, co-winner of the 2021 Nobel Peace Prize, for the auction of the medal given to him when the award was granted.< /p>

It was acquired by an anonymous buyer Monday in New York for 103.5 million dollars, to be donated to the Unicef ​​program dedicated to Ukrainian children displaced by war. This sum smashes the records, all categories combined, for auctions of this kind.

It is necessary that “people understand that a conflict is going on and that we must help the people who are suffering the most”, said Muratov, Russian editor of the independent investigative newspaper Novaya Gazeta, explaining the reason for the sale.