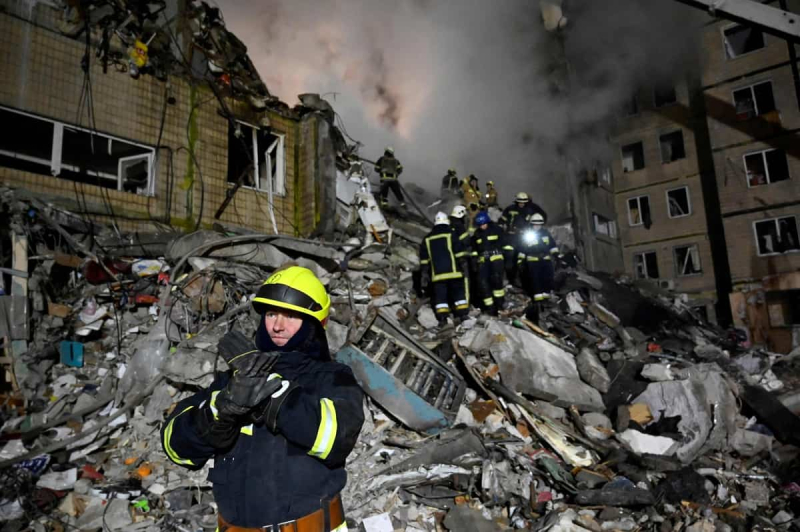 The death toll from a Russian strike on a residential building in Dnipro in Ukraine climbed to 36 on Monday, a tally that is expected to rise further and is one of the heaviest since the start of war.

As usual, the Kremlin denied being responsible for the carnage, blaming the Ukrainian side. Russian presidential spokesman Dmitry Peskov spoke of a “tragedy” that may have been caused by a shot by Ukrainian anti-aircraft defence.

For his part, nearly 48 hours after the strike , the head of the Ukrainian national police Igor Klymenko announced that after a second night of searches, 36 dead, including two children, had been found, and that 75 people, including 15 children, were injured.

According to Ukrainian regional governor Valentyn Reznichenko, “the fate of 35 other residents of the building is unknown”, raising fears of a doubling of the death toll.

Rescue operations are still continuing for try to find survivors under the smoking rubble. A canine brigade has notably been deployed.

Since the start of the rescue operations, “39 people have been saved” from the ruins, according to the governor.

Sunday afternoon, Roman Jouravksy was still desperately looking for his mother who lived there. “My mother has not yet been found. But the probability, given that five floors collapsed on top of it…”, he begins before his voice stops.

The Kremlin took two days to react, with his spokesman who denied that his country could have carried out such a strike.

“The Russian armed forces are not bombing residential buildings, nor civilian infrastructure, they are bombing military targets,” Peskov said, despite multiple bombings that have hit a multitude of non-military targets since the start of the war. invasion on February 24.

Russian President Vladimir Putin did not comment on the subject on Sunday, saying on the other hand that his war in Ukraine was in a “positive dynamic”, a few days after Moscow claimed the capture of a small town in eastern Ukraine.

The strike that destroyed the apartment building in Dnipro was carried out in the wake of a regular and massive bombardment campaign that Moscow has been carrying out since October against Ukrainian energy infrastructure, which has plunged the population into darkness and cold. in the middle of winter.

Faced with this rain of missiles and the threat of a new Russian offensive, Westerners have intensified their military aid to Ukraine. They now plan to send armor and tanks there after having long been reluctant to deploy heavy armaments there.

After the Dnipro strike, the United States denounced “a new example of brutal war and barbaric conduct by Russia against the Ukrainian people”.

Faced with promises of arms deliveries, in particular promises of tanks from the United Kingdom and Poland, the Kremlin has sworn that these armored vehicles will “burn”. “These tanks are burning and will burn,” Dmitry Peskov said in his daily telephone briefing to the press, once again accusing the West of using Ukraine “to achieve anti-Russian goals.”

Motivated and with increasing military and financial aid, the Ukrainian forces repelled the Russian army by inflicting withering reverses in the spring and autumn.

kyiv, however, says it needs heavy tanks, light armor, long-range missile systems and anti-aircraft defenses to retake all of the territory Moscow occupies in eastern and southern Ukraine.

On Saturday, London announced the delivery to Kyiv of Challenger 2 armored vehicles, which would be the first delivery of Western-made heavy tanks to Ukraine.

After its severe setbacks in the fall, Russia is trying to regain the initiative with its bombardment of the energy infrastructure and by redoubling its efforts in the battle to take Bakhmout, a city in the east, in the grip of a bloody battle since the summer.

Moscow claimed victory last week, claiming to have taken Soledar, a city just north of Bakhmout. Today largely destroyed, this agglomeration with a mining economy had some 10,000 inhabitants before the war. Ukraine has denied abandoning the town, citing ongoing fighting.

The Ukrainian military, in a statement, claimed to inflict “heavy human casualties” on Russian forces near Bakhmout and Avdiivka , another city in eastern Ukraine.

Elsewhere in the country, the Ukrainian presidency has recorded three more civilians killed in Russian strikes in the Kherson region, partly reconquered by Kyiv in November.

The head of the International Atomic Energy Agency (IAEA), Rafael Grossi, is expected in Ukraine on Monday. In a tweet before his departure, he stressed that his organization would expand its presence in this country “to help prevent a nuclear accident during the ongoing conflict”.