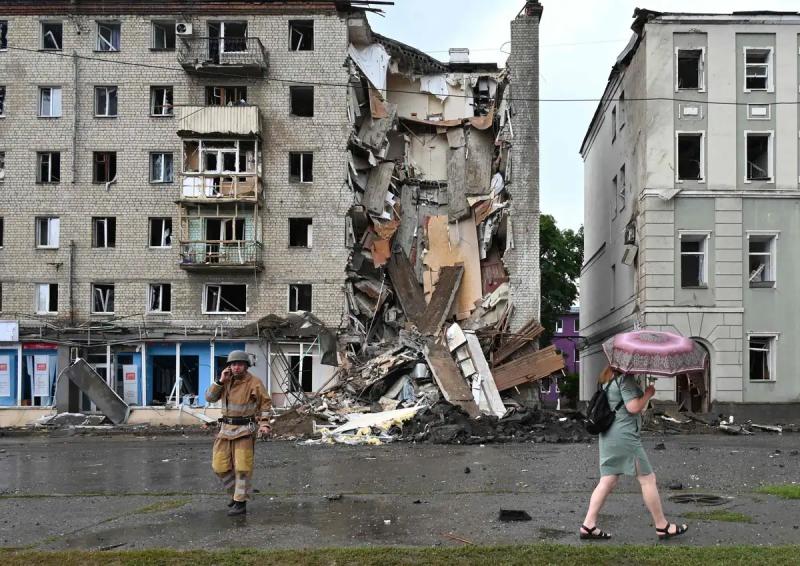 Ukraine warned on Monday that Russian forces were preparing to launch a new offensive on key towns in eastern Donbass, while attacks on Kharkiv, Ukraine's second largest city, resulted in six deaths.

Europe has entered a period of great uncertainty over the continuation of gas supplies from Russia, with the Russian giant Gazprom starting maintenance work on the two Nord Stream 1 gas pipelines, which carry the gas delivered to Germany and other countries in the west of the European continent.

This stop for ten days was in theory only to be a technical formality. But in the context of the war in Ukraine and the tussle between Moscow and the West over energy, no one can bet on the future.

In the Donetsk region, in the east of Ukraine, which has become the main objective of Russian troops, “there are signs that enemy units are preparing to intensify combat operations in the direction of Kramatorsk and Bakhmout”, warned in the morning the staff of the Ukrainian army.

Kramatorsk, the administrative center of Donbass still under Ukrainian control, and the neighboring city of Sloviansk are considered to be the next targets of the Russian military in their plan to completely conquer the Donbass mining basin, four and a half months after the start of the invasion of Ukraine.

Meanwhile, the death toll from Sunday's shelling of an apartment building in Chassiv Iar, eastern Ukraine, has risen to 31, the local branch of Ukraine's Emergency Situations Service said. Nine people were also rescued.

“In total, the bodies of 30 people were found. Nine people were rescued from the rubble,” the Ukrainian Emergency Service said on Facebook, adding that a 31st body had been spotted but not yet recovered.

AFP journalists saw dozens of rescuers working in the rubble of this partially destroyed building on Monday, helped by a mechanical digger.

Rescuers did not specify how many people were still under the rubble.

Chassiv Iar, a town of 12,000 inhabitants, is located in the Donetsk region, which is the priority objective of Russian soldiers after their claimed conquest of the neighboring Lugansk region to occupy the whole of Donbass.

This has been partially controlled since 2014 by Moscow-backed separatists after the Russian annexation of Ukraine's Crimean peninsula .

Russian Defense Ministry spokesman Igor Konashenkov, for his part, assured on Monday that “more than 300” Ukrainian fighters had been killed in strikes near Chassiv Iar, without however giving dates.

< p>According to Donetsk Region Governor Pavlo Kyrylenko, at least 591 civilians have been killed and 1,548 injured so far in the region since the Russian invasion began on February 24. On Friday, he said that Moscow was preparing “new actions” in the east.

The Ukrainian military reported heavy shelling throughout eastern Ukraine, but a pause in Russian ground attacks.

“The enemy in our operational area remains behind the lines of defense, does not advance by land, does not have the possibilities and the capabilities to create new strike groups,” the Southern Operational Command said early Monday.

“Around 10 a.m., the aggressor country fired artillery from multiple rocket launcher systems at residential areas,” the regional prosecutor's office said in a statement: “31 people were injured, including two children aged four. and 16 years old. Six civilians, including a 17-year-old boy and his father, were killed.”

In his speech on Sunday evening, Ukrainian President Volodymyr Zelensky condemned “all those who order such strikes, all those who carry them out targeting our ordinary cities, our residential areas, kill absolutely deliberately” and promised to bring them to justice.

“The Ukrainian army is holding firm,” he assured. “But, of course, there is still a lot to do.”

In addition, Russian planes fired four missiles at the region of Odessa, a port city on the Black Sea, in southern Ukraine, and there is no information at the moment on possible victims, announced the deputy head of the presidential administration, Kirill Tymoshenko.

According to Serguiï Khlan, an adviser to the head of the military administration loyal to Kyiv in the Kherson region (south), a center Russian military command, radars and air defense systems were destroyed during the night by the Ukrainian army in Tavryisk, a locality occupied by the Russians located about sixty kilometers east of Kherson.

“We haven't even started!”

“The quantitative advantages of the Russian army are offset by the precision of the missiles and artillery available to Ukraine”, the Secretary of the Security Council said on Twitter on Monday and Ukrainian National Defence, Oleksiï Danilov.

“Western weapons delivered to the Ukrainian Armed Forces are already changing the tide of the war. And we haven't even started!” he added.

The occupation authorities of the Kherson region also assured on Monday that they had foiled an attempted attack against their leader in this territory that Kyiv is trying to take over.

In recent weeks, attacks against officials put in place by Moscow have multiplied in the occupied regions of Kherson and Zaporizhya, also in southern Ukraine. At the end of June, an official of the occupation administration was killed in Kherson.

Russia denounces acts of “terrorism” carried out by Ukraine.