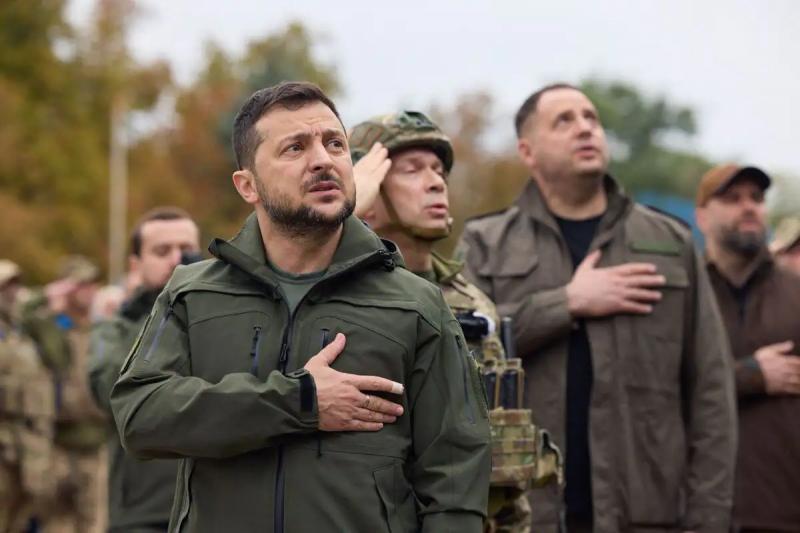 KYÏV | Ukrainian President Volodymyr Zelensky on Wednesday promised “victory” from the strategic city of Izium, recaptured from the Russians in a surprise counter-offensive, while Moscow said it was determined to continue to shell Ukraine.

This is the first trip by the Ukrainian head of state to the Kharkiv region since the liberation of the area that month, almost entirely reconquered by his forces in a fortnight.

Izioum, a city of nearly 50,000 inhabitants before the war, had been the subject of deadly fighting in the spring before being taken by the Russians who made it a strategic node for the supply of their troops. Its reconquest by Kyiv is therefore a setback for the Russian army.

“We are only moving in one direction, forward, towards victory,” Mr. Zelensky wrote on Telegram. Surrounded by armed bodyguards, the president in khaki wore a “Ukraine or death” patch on his shoulder, according to photos from the presidency.

In a video, he compared the destruction of Izium with that of Boutcha, a town near Kyiv from which Russian forces withdrew in the spring, leaving behind the bodies of coldly executed civilians. Abuses that Moscow denies having committed.

“It’s the same: buildings destroyed, people killed. It's part of our history, part of the modern Russian nation,” he said in English, without detailing these accusations against the Russian occupier in Izium.

Despite Russia's retreat from the Ukrainians, President Vladimir Putin does not consider the invasion launched on February 24 to be a “mistake”, German Chancellor Olaf Scholz said on Wednesday.< /p>

Ukraine has announced that it has taken back from the Russians in September alone thousands of square kilometers in the East and South, where the situation is “totally tense” and “very dynamic”, warned the spokeswoman for the command. South of the Ukrainian army, Natalia Goumenyuk.

For its part, the Russian army, whose strikes in recent days have caused vast power cuts in several Ukrainian regions, said on Wednesday that it was pounding the Ukrainian forces across the country, especially in the Kharkiv region.

< p>“Massive strikes were carried out in the areas of Dvoritchna, Balaklya and Kupyansk localities,” the Russian Defense Ministry said.

Many other cities and regions were also targeted .

In Mykolaiv (South), two buildings were hit and two people died, according to local authorities. In Bakhmout, a city in the Donetsk region that Moscow has been trying to conquer for months, five civilians were killed on Tuesday, according to the regional governor.

In the Donetsk region, Governor Pavlo Kyrylenko reported shelling “across the entire front line”. The one from the neighboring region of Lugansk, Sergei Gaïdaï, announced that the Russian forces had regained control of the city of Kreminna.

Ukraine's counter-offensive has enabled the reconquest of almost the entire Kharkiv region, bordering Russia, in particular the towns of Balakliïa, Kupiansk and Izium. These last two were key logistical centers for the Russian forces.

Strengthened by Western arms deliveries, Ukraine is conducting a parallel operation in the south of the country, in the occupied Kherson region, but the gains are less compared to the North-East .

In recent weeks, the Ukrainian army has pounded strategic bridges there to disrupt the supply of Russian forces. It claimed on Monday to have taken back 500 km2.

On Wednesday, the Russian National Guard, deployed in the occupied regions of Kherson and Zaporizhia, told Russian agencies that they had “arrested more than 130 people” working with the special services and the Ukrainian army.

The Ukrainian advances in September are the most important since Moscow withdrew from the outskirts of Kyiv and the center of the country in the spring after failing to conquer them.&nbsp ;

The West has adopted sanctions against Russia and increased arms deliveries to the Ukrainians. Leaders of European Union and NATO countries regularly come to Kyiv to show their support for Mr. Zelensky.

European Commission President Ursula von der Leyen announced in front of the European Parliament in Strasbourg (France) to go there on Wednesday by promising “unwavering solidarity” with Ukraine and firmness against Moscow.