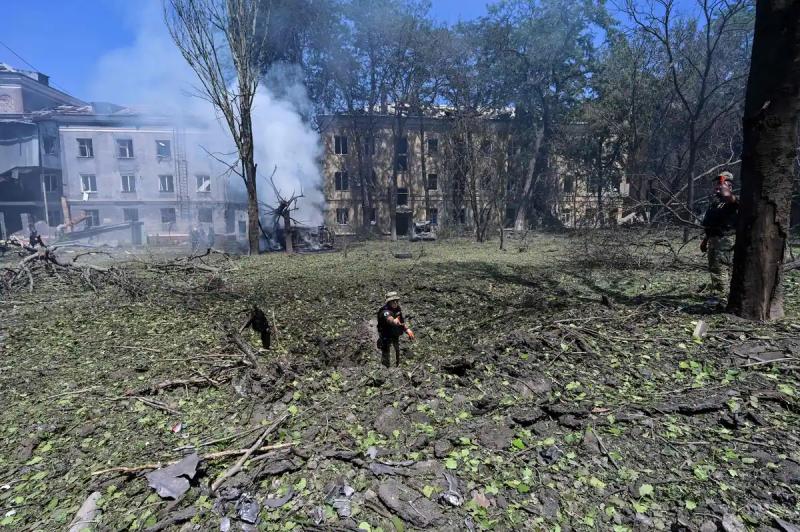 KRAMATORSK | Russian forces on Thursday bombarded several towns in Donbass, a basin in eastern Ukraine that they are trying to completely conquer, including that of Kramatorsk, where at least one civilian was killed, according to local authorities.

In Kramatorsk, capital of the Ukrainian-held part of Donbass, the explosion left a large crater in a courtyard between a hotel and apartment buildings, noted AFP journalists. They saw the body of a person killed and wounded, as well as two cars on fire.

“Airstrike against the central part of Kramatorsk. There are victims,” the mayor of the city, Oleksandr Gontcharenko, announced on Facebook, calling on residents to stay in the shelters.

This “deliberate attack against civilians” resulted in “one death and six injured,” said Donetsk provincial governor Pavlo Kyrylenko on Telegram, adding that these figures were provisional and that “six buildings were damaged, including a hotel and a residential building”

“I ask everyone: evacuate! The evacuation is temporary, we must preserve life now,” he added.

The Russians, who have advanced in recent weeks in the Donbass, their priority objective since their withdrawal from around Kyiv at the end of March, claim to have taken total control of the province of Lugansk a few days ago, one of the two forming the mining basin.

The Russians “have still not reached the limits of the region”, denied Thursday the governor of the province, Serguiï Gaïdaï, accusing the Russians of enlisting by force the inhabitants of the cities of Severodonetsk and Lyssytchansk, under their control, in promising them a job.

The forces of Moscow are now seeking to conquer the other province, that of Donetsk, to occupy all of Donbass, which Moscow-backed separatists have partially controlled since 2014.

In this province, Sloviansk and its twin city Kramatorsk are considered the next targets of Russian forces in their plan to conquer Donbass, after four and a half months of conflict.

On Tuesday, Russian rockets struck and partly burned down and destroyed a market in the center of Sloviansk, and killed at least two people.

On Wednesday, the mayor of Sloviansk, Vadim Liakh, had indicated that the evacuation of the city, encouraged by the local authorities, was “in progress”.

“I send my wife and after I don't I have no choice, I enlist in the army tomorrow,” Vitaly, 30, told AFP after bidding farewell to his wife Svitlana, who left for Dnipro (center) on Wednesday in a bus with some 150 women and children on board.

“They had to leave, after what happened yesterday (Tuesday), they hit the city center,” said Vitaly, saying he was convinced that Sloviansk would not fall into the hands of the Russians and that his family would return there. .

On Wednesday there were still around 23,000 of the approximately 110,000 inhabitants that it had before the conflict, its mayor said, counting 17 dead and 67 injured since the start of the hostilities.

In the south, the Russians are still bombarding the Mykolaiv region and fighting is raging around the city of Kherson, which they have occupied since the first days of the war and where they are trying to prevent the Ukrainian counterattacks, according to Kyiv.

The Ukrainian army finally affirmed on Thursday that it had regained control of Serpents' Island in the Black Sea, after having handed over its flag there a few days earlier, following the withdrawal of Russian forces from this small symbolic territory.

Moscow, for its part, claimed to have carried out a strike there in the morning with “high precision missiles”, killing some of the Ukrainian soldiers who went to plant a flag there and causing the survivors to flee.

While in Western Europe, eyes were on Thursday on London, where British Prime Minister Boris Johnson has resolved to leave power, the Ukrainian presidency thanked him for his support in “the most difficult” of the Russian invasion. President Volodymyr Zelensky expressed his “sadness”.

In Indonesia, a meeting of foreign ministers of the world's twenty largest economies (G20) began Thursday on the island of Bali, in the presence of Russia and Ukraine's Western allies.

Given the tension between the two camps and the presence of the head of Russian diplomacy Sergei Lavrov, “we expect a fairly tough confrontation”, indicated a French diplomatic source.

The European Union has warned that it refuses that Russia uses this G20 as “a platform for its propaganda” on the conflict in Ukraine.

A US official, however, said he expected “virtually all G20 countries” to agree on initiatives to address global food insecurity and energy price volatility driven by war.

He added that a joint G20 statement on Ukraine would not be possible due to Russia's participation in the summit.

Thursday, the eve of the interministerial meeting in Bali, Mr. Lavrov met his Chinese counterpart Wang Yi there. The two parties notably considered “unacceptable” the “unilateral sanctions adopted by circumventing the UN”, according to the Russian ministry.

< p>China, which refused to condemn the Russian invasion of Ukraine, has maintained good relations with the Kremlin despite efforts by Western countries to isolate it.

New Jacinda Ardern, for her part, castigated the “failure” of the UN to prevent the war in Ukraine, and accused Russia of having imposed on the Security Council its “morally corrupt” position and its “illegal war” .

Ms. Ardern, a long-time critic of the veto power of the five permanent members of the Security Council (China, United States, France, United Kingdom, Russia), renewed her call for a reform e of the United Nations.