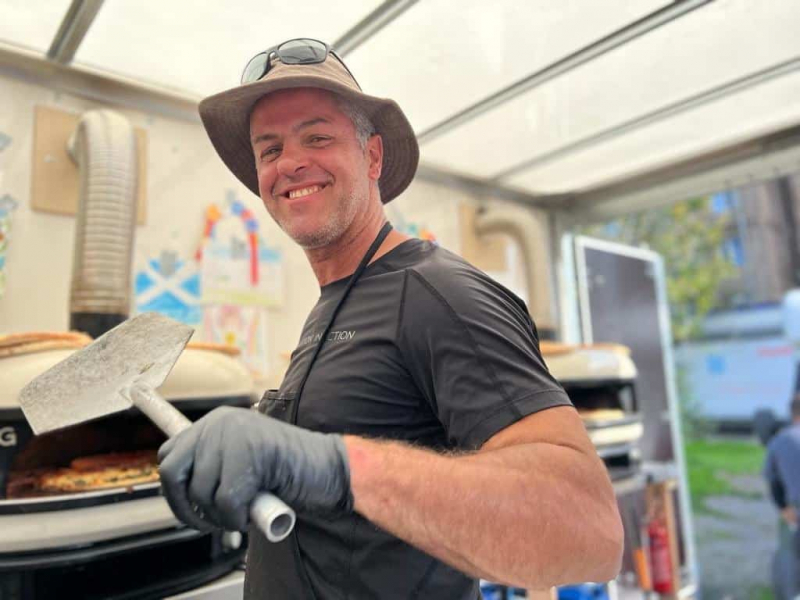 Six months after a first mission at the Polish border, a Quebec firefighter has this time crossed Ukraine to the sound of explosions for another humanitarian operation that has taken him to cities recently liberated and where he witnessed the resilience of a people who did not want to give in to the Russian invader.

“He did not hesitate when I asked him if he wanted to accompany me and he invested a lot of time to be able to come,” reveals Mr. Fournier.

< p>The latter has replaced colleagues over the past six months to exchange enough work time to be free for three weeks.

The two Quebecers voluntarily assisted the Scottish foundation Siobahn's Trust from October 3 to 23. Under the slogan “Make pizza, not war”, it delivers hot meals to Ukrainians from food trucks.

“ Harry (Scrymgeour) is an art dealer who left his job to devote himself to this humanitarian operation. The foundation has six trucks in addition to two refrigerated trucks,” says Serge Fournier.

He made his name!

His involvement is so appreciated by the foundation that his most recent truck was named “The Surge”, an English-sounding reference to the Quebecer's first name.

“We distribute about 4,000-5,000 pizzas a day,” says Mr. Fournier. We don't just give pizza, but hope and joy in places without water or electricity where no international organization has gone before.”

“The face of war has changed since April,” noted Mr. Richer, as there are no longer any refugees queuing at the Polish border to leave Ukraine.

Their first stop was made in Lviv, a city in the northwest of the country relatively unscathed. “People live there normally. They learn to live with it (the bombings), he explains.

The two firefighters quickly headed for eastern Ukraine, where the fighting was very fierce. A 15-hour journey that will see them distribute pizzas in 17 towns.

“The roads are quite dangerous. We were driving at night. The checkpoints are numerous and unlit. There are heaps of sandbags or cement blocks on the side of the road, you have to be really careful,” he recalls.

“We went to recently liberated cities like Kharkiv and Izium. The destruction is great in Kharkiv (less than 30 km from the Russian border) which has neither water nor electricity. We saw people in the line who had dirty hands,” he says.

They quickly see the hell lived by the Ukrainians. Buildings are in ruins, destroyed military and civilian vehicles litter the landscape, as do shrapnel from bombs.

But Quebecers' most direct contact with the war probably took place in Zaporijja. The city of 800,000 inhabitants is still under Ukrainian control. But the front line is only about 20 km away.

The region (oblast) is also called Zaporizhja, a large part of which is under Russian control. It is in this territory controlled by the invader that the nuclear power plant of Zaporijja is located – the largest in Europe – about fifty km from the city of the same name. Insanely and irresponsibly, it was the target of numerous Russian bombardments.

“We arrived in Zaporijja in the dark. We didn't know what awaited us. The city received missiles in the morning and we could still hear them at night. Several windows were smashed in the buildings and there were bullet holes in the windows of the shops,” recalls Serge Fournier.

In the hotel where they were staying, there was also a group of foreign fighters who every morning was returning to the front line.

At war or volunteers

Mr. Fournier also has precious memories of his meeting with the Smoline firefighters.

“It is a town of 12,000 people that operates a uranium mine. Their firefighters have gone off to war, except for four who have stayed voluntarily because the city can no longer pay them. I fell in love with the people of Smoline.”

Upon their arrival in the newly liberated areas, aid workers initially showed great reserve when distributing pizza, while elsewhere they did not hesitate to put on music and create a festive atmosphere.

“We thought we would be more sober in these areas, but people wanted to think about something other than the war, so they surprised us by wanting to dance.”

For its mission, the group was able to benefit from the assistance of many Ukrainians.

“Nina, a model, was our contact with the police who gave us access to the war zone. Anna and Valéry accompanied us throughout the trip. During the distributions, several Ukrainians came to help us”, underlines Mr. Fournier.

These links with Ukrainians made him aware of the source of the problem, the Russian frustration of never having been able to tame the Ukrainians.

“Ukrainians estimate that about 80% Russians agree with this war. Their hatred towards the Ukrainians goes back a long time by their refusal to adhere to communism under Stalin and their attachment to their land and to what belongs to them. They have already suffered other genocides in the past such as the one in 1933-34, the holomodor, during which four million Ukrainians died of starvation (by order of Stalin).

“I sincerely believe that Ukraine will win this war. I am convinced of it after this three-week journey. Their desire and their love for their country will make them triumph, but we must continue to support them”, concludes the brave firefighter.