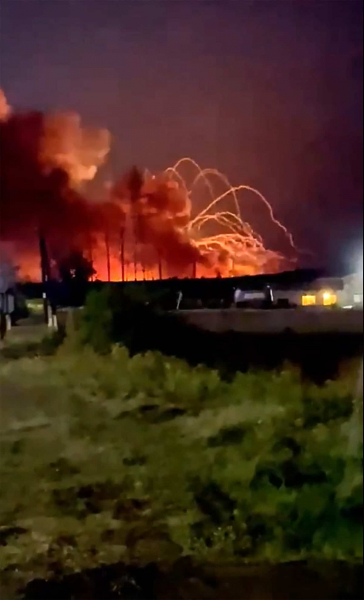 “Following a strike by the Ukrainian armed forces, an ammunition depot exploded in a village in the Belgorod region,” Gladkov said on Telegram, adding, however, that “according to preliminary data, there is no no casualties or injuries.”

Russian authorities earlier Thursday accused Ukraine of shelling a residential building in Belgorod, a major city rarely hit by fire and located in a region border with Ukraine.

“Ukrainian Armed Forces shelled Belgorod. Air defense has been activated. There is destruction in a residential building,” Mr. Gladkov said on Telegram.

According to him, there were no victims and the damage is not “critical” for the building. An unexploded part of a projectile also fell on the sports field of a high school in the city.

Images shared on social networks showed the top floor of this residential building of a fifteen stories gutted. A video shows the impact, in a plume of black smoke.

“At first there were loud explosions, but we are already used to it…then the building shook very hard and there was an explosion. It was dark because of the dust,” resident Yulia Mezinova told local television.

Mr. Gladkov also accused Kyiv of shooting at the Russian village of Krasnoye, located on the border with Ukraine. “There is destruction on school grounds,” he said, posting a photo of a crater with shrapnel.

In the Russian region of Kursk, another area bordering Ukraine, two villages were left without power on Thursday after Ukrainian bombardments damaged a power station, Governor Roman Starovoit announced on Telegram.

If the Belgorod region was regularly targeted by fire from Ukraine, especially since the spring, the city of Belgorod, the regional capital, has so far been rarely targeted since the start of the conflict.

On Tuesday, Gladkov reported that 2,000 residents were without power after a Ukrainian strike on a power station in the town of Chebekino, also in the Belgorod region. On Monday, a 74-year-old woman was killed and others injured in another shelling of the town.