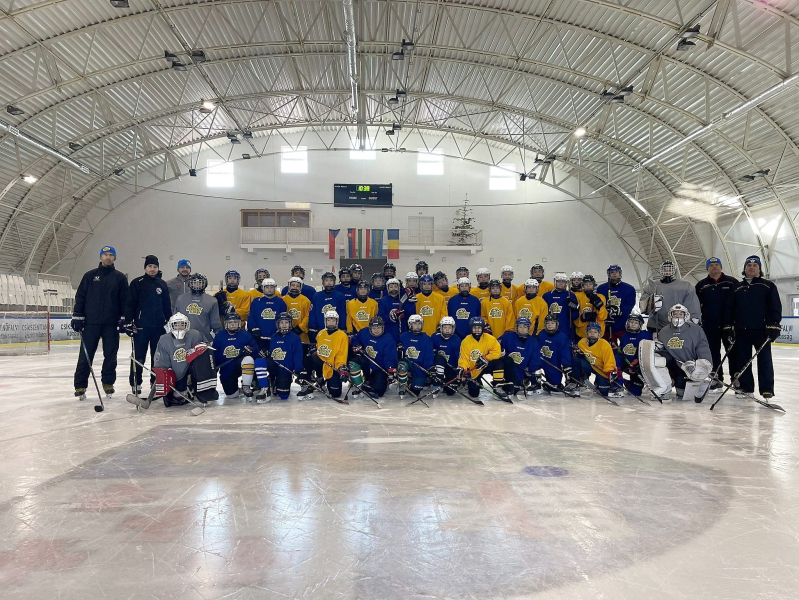 Two players lived under Russian occupation in Kherson, others had to flee their country altogether and the majority of them saw their father go into battle to defend their freedom: the presence of the Ukrainian team at the next Tournoi international de hockey pee-wee de Québec, in a few weeks, goes far beyond sport.

When the Tournament announced, on January 20, that the 18 players of the Ukrainian team and the coaches had obtained their visas and that they would officially participate in the competition, Sean Bérubé breathed a sigh of relief.

The story began in March 2022. Installed at home, the resident of Saint-Gabriel-de-Valcartier followed, like the whole world, the beginning of the Russian invasion in Ukraine, a country dear to him and where he had played hockey, between the ages of 14 and 17.

“When I played there, I had been hosted by my coach, Volodymyr Razin, and his wife, Valentyna. They had just lost their only son and had no one to take care of them. In March 2022, when the Russian tanks were about 15 km from Kyiv, I spoke to them and convinced them that it would be my turn to harbor them. We had to find a way to get them out of the country,” says Mr. Bérubé.

The latter immediately began the process and called on a former Ukrainian teammate, Yevgeny Pysarenko, who has lived in Romania for twenty years.

“The queues were endless in Poland. So I got in touch with him and he explained to me where to get them and he helped me get them out of Ukraine, through Romania. .

A BEER THAT CHANGES EVERYTHING

Once the four refugees are safe and sound, Bérubé and Pysarenko find themselves over a beer in a hotel in Bucharest.

“ I told him I owed him a beer for his help.

But Pysarenko has something else in mind.

“He told me he wanted me to help bring a team to the Pee-Wee Tournament. At first, he was thinking more of a team from Romania, but I joked to him: “I just released refugees from Ukraine, why not a team of young Ukrainian refugees?”

Pysarenko succeeded, through many contacts in Ukraine and elsewhere, to find Ukrainian players of pee-wee age to participate in the tournament. However, the challenge is considerable since, while several of them have fled Ukraine, others are still there, and their fathers being at the front, authorizations are difficult to obtain.

But they succeed with the help of Bérubé, the Ukrainian Hockey Federation and the organization of the Pee-Wee Tournament.

These young people had the opportunity to get together for the first time as part of the first training camp. For the majority of them, it was the first time they had put on skates since war broke out in Ukraine in February 2022.

The young people were able to take advantage of the facilities of the Karcfalva ice rink in Romania, to practice their individual skills.

“It was so good to see them smiling,” recalls Pysarenko, reached Tuesday evening at his home in Romania.

Several young people were putting on their equipment for the first time since the war broke out in Ukraine, in February 2022.

Another meeting is scheduled for January 28 in Romania. Ukraine Team Select, as it will be called at the Pee-Wee Tournament, will take part in its last preparatory camp before heading to Quebec City on February 1.

Sean Bérubé will be there. In particular, he will have the mandate to pick up four young Ukrainians, two of whom come from Kherson, a city that has lived under Russian occupation for several months.

Despite the situation in their country, young hockey players keep the smile.

“A mother told me that we should perhaps go get them in Ukraine, near the border. There's not a lot of activity in this area, so we'll see…”

Beyond the victories they could win at the tournament, the most important will be when they set foot in Quebec, in just under a week.

“Participating in this tournament, for these young people, was already important even before the war, recognizes Yevgeny Pysarenko. For them, it's like their World Championship. Right now, there are so many bad things happening in our house. Some players' fathers are in combat right now in Ukraine. Coming to Quebec is very important for these young people. What we want is to prove the character of Ukraine, that we are a strong people and that we can continue to live our lives despite the war. »

A relationship that has lasted 30 years

The relationship between Sean Bérubé and Ukraine is not new, and it is fascinating. From an early age, he had developed a fascination with Soviet hockey. He even jokes that his biggest dream was not to play in the NHL, but to one day represent the Red Army!

Sean Bérubé has been hosting his former coach Volodymyr Razin and his Valentine's wife.

“I was a small player and I didn't fit into the North American style of hockey. Here, it was a game of corridors and it played physical while in Russia, it looked like bees flying on the ice. I was tripping! Everyone knew it. People called me Bérubov,” he laughs.

At 13, he dreamed of playing the pee-wee tournament like all young people his age, but his team, the Loretteville Warriors , did not place.

To try to console him, his father had decided to take in young pee-wee Ukrainians, from Sokol in Kyiv.

They had then forged ties with the Ukrainians.

“They invited me to practice with them and I even played an exhibition game before the tournament started. When they left, the team's interpreter told my father that if I wanted to play with them the following year, I was welcome.

And that's what he did: for the next three seasons, he left a few months a year for Ukraine with his father to fulfill his dream of playing the “Soviet” style. .

It was his father who, with the help of his secondary school, homeschooled him.

During his time in Ukraine, he also had the opportunity to visit Russia. And the following anecdote is just as tasty as it is representative of the changes that have taken place in 30 years.

“I dreamed of seeing Moscow, and my host mother had decided to take me there. On the other hand, I did not have a visa and we had taken the Ukrainian passport of my best friend. We had arrived at the borders in the evening and she didn't want me to talk, so when the agents asked me questions, she said that I had mental retardation,” he says, laughing.

The links woven in Ukraine are still very present, and the fact that it now hosts its trainer from the time proves it. But that's not all.

And to help, he also made a partnership with the Saint-Patrick secondary school, where his son evolves, to allow the Ukrainians to establish their headquarters at the PEPS of Laval University, place where the Saint-Patrick hockey teams train, before the start of the tournament.

In fact, a crowdfunding campaign on the GoFundMe platform has been created to help cover the costs of this trip for the Ukraine team.

It can be found under the name “Ukrainian Hockey players at the Quebec tournament”.