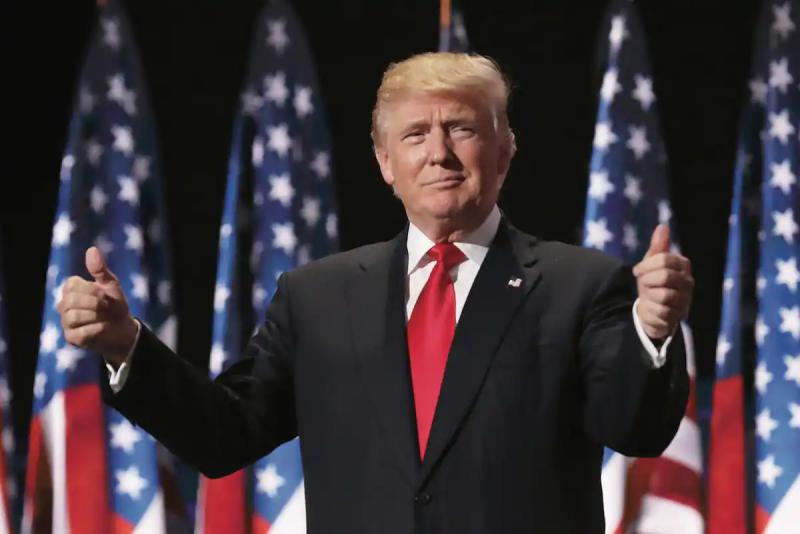 Washington | Entangled in legal affairs as he considers a new race for the White House in 2024, Donald Trump is breathing new life into the QAnon conspiratorial movement, of which he sets himself up as an icon.

The anonymous founder of the far-right nebula, “Q”, may have disappeared, the former Republican president showed during a recent election rally in Ohio that the movement retained strength, row behind him.

Supporters of Donald Trump were filmed solemnly raising their arms, index fingers outstretched, as Trump ended his speech to the sound of a piece of electronic music identified by Media Matters, a progressive research center, as “Where one from we go, we all go”, sometimes referred to by its initials WWG1WGA in English, the anthem of QAnon.

Donald Trump had already used this song on August 9 in a video where he protested against the search from his Florida residence by the FBI, as well as on several other occasions, which has been noticed by QAnon followers on social media.

Donald Trump is also increasingly echoing QAnon's ideas on his Truth Social social network. On September 13, he shared an edited photo of himself wearing a huge Q on his lapel.

The QAnon nebula initially subscribed to the theory that Joe Biden and the Democrats were part of a global Satanist and pedophile conspiracy. Among his followers was the “shaman” Jacob Chansley, who entered the Capitol on January 6, 2021 shirtless and armed with a spear, wearing bison horns.

But according to experts, the conspiracy movement now adopts more “Trumpist” theories such as the denial of the victory of Joe Biden in the 2020 presidential election or the notion of “deep state”, frequently used by Donald Trump to denounce officials who, according to him, work to undermine the authority of the president.

For Rachel Goldwasser, an expert on the far right at the Southern Poverty Law Center, it is now “difficult to distinguish” between QAnon and Donald Trump's MAGA (Make America great again) movement.

The billionaire is today “a kind of hero of conspiracy theory”, she explains.

Born in 2017 in the United States, the QAnon movement takes its name from enigmatic messages posted by a certain “Q”, supposed to be a senior American official close to former American President Donald Trump.

Over For years, these theories have convinced more and more Americans, and the FBI monitors this far-right group, considered potentially dangerous.

Many QAnon activists have participated in campaign rallies in Donald Trump while waving banners with the name of QAnon or wearing t-shirts marked with a large Q. Trump has never officially supported them, but has never distanced himself from them either.

After his electoral defeat, and more particularly after the assault on the Capitol on January 6, the conspiracy movement ran out of steam. The 'Q' posts ceased and someone linked to the website where they appeared called on their followers to accept Joe Biden's victory.

Pushed out of major social media, QAnon followers turned turned to Telegram and then, when it launched in February 2022, to Truth Social.

Largely diminished, the nebula has refocused on the supposed electoral fraud that led to the defeat of Donald Trump, under the impetus of several influencers who have organized rallies on this theme.

John Sabal, known like “QAnon John”, has thus organized a large meeting in Dallas in 2021 and is planning another in November.

Ex-General Michael Flynn, who was Donald Trump's national security adviser, criss-crosses the United States to propagate the same theories. Without openly mentioning QAnon, he uses the same terminology as the far-right movement when announcing that “the storm is brewing”.

Images filmed during a fundraiser in California on September 18 show Mr. Flynn and others listening to a woman sing “Where one of us goes, we all go”.

Pointing the index finger skyward was hitherto not a gesture associated with QAnon, but the episode raised many fears: images of Trump supporters with arms raised have notably been compared to the Nazi salute.