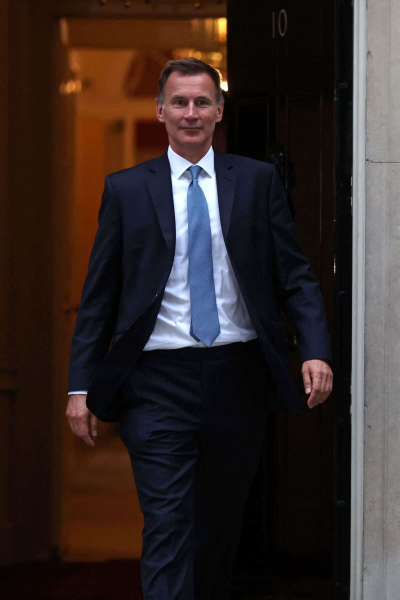 New British Finance Minister Jeremy Hunt pointed out the government's “mistakes” on Saturday and warned that he would take “very difficult decisions” in the face of the country's crisis, a change of course that may not enough to save Prime Minister Liz Truss.

“Truss is fighting for survival,” headlined The Times on Saturday, writing that “even in Downing Street, senior officials think it's only a matter of time before she's forced to leave.”

“Truss clings to power,” headlined the Daily Telegraph, the conservative newspaper claiming that Tory parliamentarians are still plotting to get her out of the executive as soon as possible.< /p>

“What more can she (and all of us) bear?” asked the Daily Mail, which believes that Friday saw “chaos, confusion and the flip-flops reach new extremes”.

Speaking publicly for the first time since his appointment on Friday, new Finance Minister Jeremy Hunt said on Saturday bluntly “mistakes were made” by Prime Minister Liz Truss and her predecessor in the Finance Ministry Kwasi Kwarteng, who was sacked the day before. in the midst of an economic crisis that has turned into a political crisis within the Conservative Party.

“The Prime Minister has recognized this and that is why I am here,” he added on the Sky news television channel.

This close friend of Rishi Sunak, the former finance minister of Boris Johnson and opponent of Liz Truss in the campaign for Downing Street, has the mission of taking over the mini-budget announced on September 23 and very badly received by the markets, a good part of the Conservative Party and the British population.

“What I can do is show that we can fund our tax and spending plans and that is going to take some very tough decisions,” warned Mr. Hunt, who is about to abandon many promises of Prime Minister's campaign.

The Prime Minister had to give up keeping the corporate tax rate at 19%, resigning herself to increasing it to 25%, as planned by the previous Conservative government. Two weeks ago, she had already had to abandon a tax cut for the richest households in the face of the bronca aroused by this measure, including among the conservatives.

The appointment of Jeremy Hunt should reassure the markets as much as calm the rebellion among the Tories.

One of his first actions as new minister was to meet with Andrew Bailey, the Governor of the Bank of England, who had to act urgently to calm the markets after the presentation of the mini-budget.

< p>Jeremy Hunt now appears as the strong man of the government, according to the British media, when the Prime Minister Liz Truss is considerably weakened by his reversals. And his press conference on Friday did not convince.

After his speech, the markets continued to punish the pound sterling and the cost of British debt, which had been falling for several days, rose slightly on Friday, also when the Bank of England ceased its emergency action to appease the markets.

For the Financial Times, Truss sacrificed Kwarteng “in a bet to save” his head in Downing Street but “the only thing that unites the (Conservative) party is the lack of confidence in Truss”.

On Friday, the Prime Minister had evaded questions about her personal fate, hammering that she remained “absolutely determined” to deploy her policy.

“I feel cheated, totally cheated,” Conservative MP Christopher Chope told the BBC, judging Liz Truss “in total opposition to everything she supported when she was elected”.

But in his camp, we also raise the specter of a crushing defeat to those of the conservatives who would be tempted to provoke elections. ons general, at a time when the Labor opposition is prancing ahead in the polls.