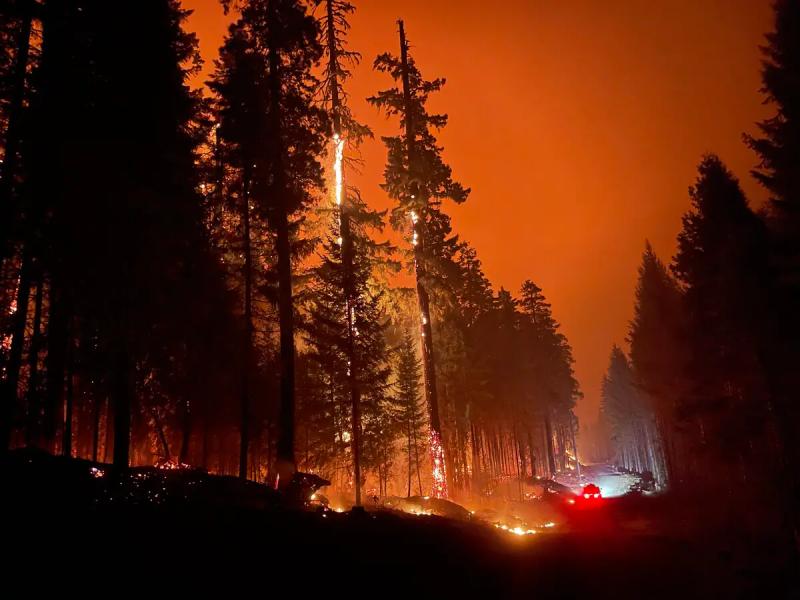 A massive wildfire in the U.S. state of Oregon continued to devour trees and shroud the region in thick smoke altering air quality, local authorities said on Tuesday .

This is just one of many fires ravaging parts of the American West, plagued by the consequences of a long drought.

< p>The “Cedar Creek Fire”, caused by lightning on August 1 in a hard-to-reach area, destroyed nearly 37,500 hectares in Oregon and was currently not under control at all, according to the latest update authorities.

“The smoke continues to create poor air quality, which will likely continue for several days,” they said. indicated.

“On Tuesday, firefighters will continue to improve and prepare the roads that will serve as a containment line,” they added.

Light rain had a positive impact on the spread of the fire, which had quadrupled in size in a few days, and falling temperatures in the coming days should help slow its progress, authorities predict.

More than 2,000 homes and 400 commercial buildings remain threatened by the fire but the authorities have lowered the alert level of their evacuation plan from 3 to 2 in some areas.

Hundreds of residents had already been ordered to evacuate and authorities had warned thousands more to prepare to follow them if necessary.

Another fire, the “Double Creek Fire”, has ravaged northwestern Oregon since August 30 and has destroyed more than 62,000 hectares of forest.

The American West is suffering the consequences of more than two decades of devastating drought, exacerbated by climate change. More than 90 fires are active in several states in the western United States.

Firefighters are fighting the “Fairview Fire” on the outskirts of Los Angeles and the “Mosquito Fire” around Los Angeles. Sacramento.