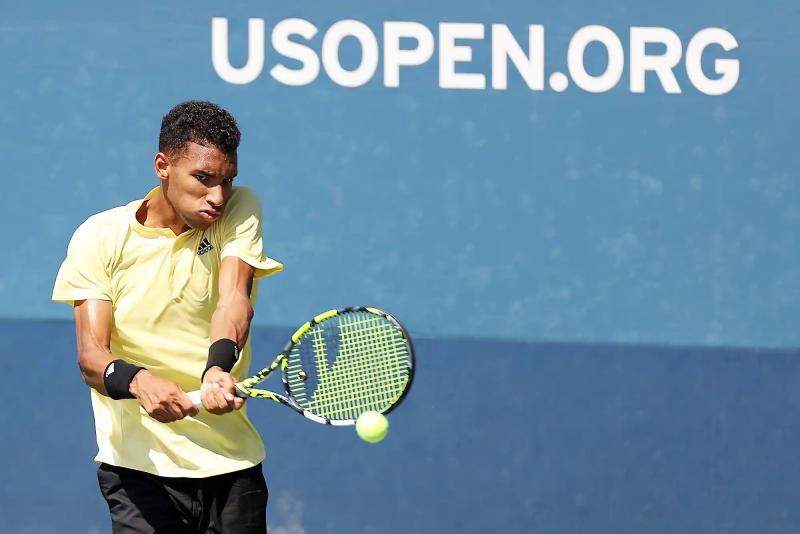 NEW YORK | Is Félix Auger-Aliassime excited about returning to New York, the venue for the first semi-final in Grand Slam of his career? At first glance, the Quebecer seems rather confident. But, above all, motivated by the idea of ​​doing even better than last year

“I hope that I will be able to repeat this performance and above all, that I will manage to go even further,” the 22-year-old said on Saturday.

“I don't like to say that I'm coming here to do what I did last year, he continued. I lost in the semi-final, that means I have an opportunity to go to the final and win. »

And winning a major tournament is obviously Félix's ultimate goal. Even if he is aware that in a Grand Slam, “the road is long until the final, and that it is never easy”.

Not even when you are sixth favorite, like him , and that, according to his own words, we have “on paper what it takes to [se] go to the quarter-finals”.

If the pride of L'Ancienne-Lorette evokes the quarters in this way, it is because the player who should be waiting for him is a certain Daniil Medvedev, world number 1 and reigning champion in the Big Apple.

This same Medvedev who had downgraded him last year, in the semi-finals, before Felix came close to revenge in Australia, in January (he had a match point in this quarter-final meeting). < /p>

In fact, Auger-Aliassime has a record of four losses against no victory against the Russian since the start of his career.

“I am getting closer, however, pointed out Félix. Medvedev is a player I've struggled against in the past, but in our last game I came very close. I hope the next time, if it is here, will be the right one. “

” I know that this meeting is likely, he added. Even if I have four games to win before and I always try to stay humble, because no meeting is easy. »

Among these “not easy” clashes, there could be this first round, at the start of the afternoon on Monday, against the enigmatic Swiss Alexander Ritschard, ranked 180th in the world and coming from the qualifications.

A player of whom Auger-Aliassime does not know “very much” and of whom he seems to be wary, despite the dizzying difference in ranking between his opponent and him.

“I saw his record [1-2 in career on the ATP, at 28 years old], but I do not know how he plays, he explained. I will take the time to watch videos of his matches [on Sunday]. Then I have to focus on myself. I know if I play at the level that I can play, I can win the game. “

” But you always have to be careful, he said. You have to be vigilant, he is a player who went through the qualifications, who won three games and who has nothing to lose. »

He likes the Big Apple

New York is not only the place where the Quebecer reached his first four aces in Grand Slam.

It was also in the Big Apple that he qualified for his first main draw in a major tournament four years ago. And that he won the junior event in 2016.

The huge site of Flushing Meadows is therefore a place he likes.

“J I've always had good times here, I have good memories. It’s hard to explain, but there are tournaments where you feel particularly good, and the US Open is one of them,” he pointed out.

“I hope this is just the beginning [of my good performances here]. I am only at the beginning of my career, I am only 22 years old. But hopefully in the next 10 or 15 years I will have more great times here. »

And hearing him talk about his desire to do better than last year on the Arthur-Ashe, we understand that Félix feels ready to meet other « very good times” from this fortnight.

In training with a certain… Casper Ruud

NEW YORK | The heat was overwhelming in New York on Saturday for the traditional “Kids' Day” of the United States Open.

But, despite the ambient humidity, hundreds of curious people sat in the sun to watch the training session between Félix Auger-Aliassime and the Norwegian Casper Ruud, the fifth favorite in Flushing Meadows.

Hey, hey, Ruud… the same player who, in the quarter-finals, curtly put an end to the Quebecer's fine run in Montreal three weeks ago.< /p>

A test and a good person

Did Felix want to polish his game against a type of opponent who has recently given him a hard time? It seems the answer is simpler than that.

“He is a very good person. I like to train with people I get on well with, rather than the other way around… even if I get along well with pretty much everyone! the 22-year-old smiled.

“It is certain that at the beginning of the week, I do not train with players from the top 10, he also explained. But as the tournament approaches, I like to challenge players like Casper. I also played with [10th seed] Taylor Fritz on Friday. It is important to test yourself well.

With “Tonton” and dad

Against Ruud, Auger-Aliassime practiced several aspects of his game, including going up to the net and the passings.

All under the watchful eye of his trainer, Frédéric Fontang, and his adviser, Toni Nadal, who traveled to New York to supervise his protege.

“Uncle” – the uncle and former coach of a certain Rafael Nadal – was also seen on a few occasions giving him advice.

But there was also another particularly attentive coach in the stands practice court number 5, then in those of the Grandstand, where the session continued.

Sam Aliassime, Félix's father and the one who showed him the basics of tennis, is at New York for the fortnight.

►In addition to Félix, Leylah Fernandez, Bianca Andreescu and Rebecca Marino will play their first round match at the US Open on Monday. The day will also feature American Serena Williams, who will play her first match on the Arthur-Ashe at 7 p.m. On Saturday, the organization also announced that Serena would also be competing in doubles, alongside her sister Venus.