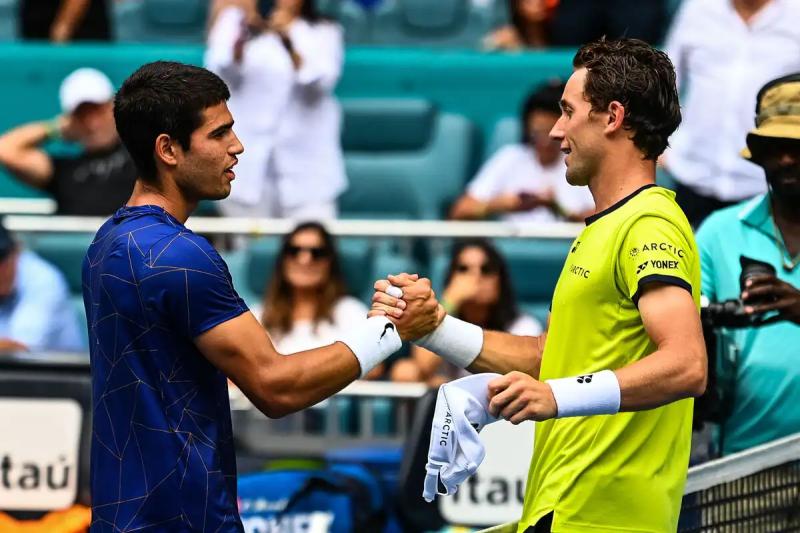 Carlos Alcaraz, 19, and Casper Ruud, 23, will aim high on Sunday in the final of the US Open, where they are blowing a breath of fresh air.

If it happened that the quest for a first Grand Slam title was doubled by that of accession to the throne of the ATP, this is the first time that this scenario concerns the two finalists. Which gives a hell of a look to this original poster also by the actors who compose it.

“I think the fairest thing would be for both of us to reach the last step and whoever wins becomes world number 1,” Ruud said after his semi-final victory against Russian Karen Khachanov, while agreeing, smiling at the lips: “if I go to bed as N.1, I will sleep really well!”.

“I am not afraid”

Alcaraz, who can become the youngest N.1 in history, deprived him of this pleasure, but he still had to spend mad energy during 4:19 of a big fight to overcome the American Frances Tiafoe , less than two days after spending 5:15 on the same central Arthur-Ashe to win an epic showdown against the Italian Jannik Sinner.

Including his victory in the round of 16 against the Croatian Marin Cilic , the young prodigy has spent 15 sets and 1:28 p.m. on the courts in his last three matches, compared to 8:56 a.m. for Ruud, who had a much quieter course.

But more than fatigue, it was the completely new context for him of a major final that Alcaraz highlighted. “Casper has already played a final at Roland-Garros, it will be my first. I will leave everything on the court but I will have to control my nerves, ”he said before assuring that he was “not afraid of this moment”. “I prepared myself mentally and physically to fight for big things like this.”

In fact, the Norwegian will have experience for him, certainly fresh at this stage, three months after his defeat on Parisian clay against Rafael Nadal. He also agreed with his future opponent: “Of course, there will be nervousness and we will both feel it”.

But Alcaraz has the psychological advantage on Ruud because he beat him in their first two confrontations, the last time at the beginning of April in the final on the cement of Miami.

< p>A success that made him the youngest winner in the history of a Masters 1000 and added to those of Rio de Janeiro, Barcelona and Madrid this year. Ample confirmation of a talent revealed to the general public in New York last year (quarter-finals).

Specialist on clay, on which he won eight of his nine titles, including three in 2022 (Buenos Aires, Geneva, Gstaad), Ruud is also having the best season of his career.

So this final may not be what many expected at Flushing Meadows between Daniil Medvedev, future ex-world No.1 and title holder, and Rafael Nadal. But it could mark, in the absence of Novak Djokovic (not vaccinated), the beginning of a new era as the retirements of Roger Federer, Rafael Nadal and the Serb approach.

Au given the performances in this US Open of the young generation of Alcaraz, Ruud, Sinner and Tiafoe, not to mention the rebirth of Australian Nick Kyrgios, men's tennis should have a bright future.