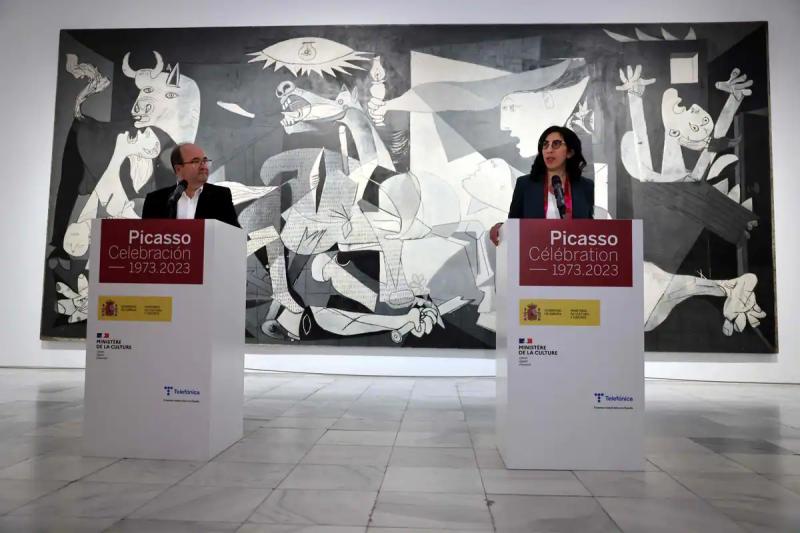 MADRID, Spain | From the Prado to the Center Pompidou via the Met in New York, 42 ​​exhibitions will be organized around the world for the fiftieth anniversary of Picasso's death, an “unprecedented mobilization” for “the most famous artist of modern art “, according to Madrid and Paris.

Prepared for 18 months by France and Spain, the “Picasso Year” will mobilize “38 major institutions in Europe and the United States Spanish Culture Minister Miquel Iceta announced to the press on Monday, launching the celebrations at the Reina Sofia museum in Madrid.

These exhibitions will “show all the facets” of the Spanish artist, born in 1881 in Malaga (southern Spain) and died in 1973 in Mougins (south-eastern France), with a series of “conferences” and “debates” about the painter and his work, added French Culture Minister Rima Abdul Malak.

The celebrations will begin September 23 at the Mapfre Foundation, in Madrid, with the exhibition “Pablo Picasso and the dematerialization of sculpture”. They will end in April 2024 at the Petit Palais, in Paris, with a retrospective on “The Paris of the Moderns (1905-1925)”.

Seven countries will host exhibitions dedicated to the Spanish painter, described by the French minister as the “most famous and emblematic artist of modern art”: Spain, France, the United States, but also Germany, Switzerland, Romania and Belgium.

Among the institutions mobilized are the Metropolitan Museum of Art (“Met”) in New York (United States), the Madrid Prado Museum, the Guggenheim Museum in Bilbao (Spain), the Pompidou Center in Paris and the Picasso Museums in Barcelona. (Spain) and Paris.

These different exhibitions will be an opportunity to highlight the “huge legacy” left by the Spanish artist, whose work “continues to serve as an absolute reference for artists around the world”, underlined Spanish Prime Minister Pedro Sanchez during a ceremony to launch the year of Picasso.

A message also relayed by Miquel Iceta, who insisted on the “permanence” and the richness of his work. The celebrations will allow “to enjoy” an art “which is still alive”, while symbolizing “the 20th century”, he insisted in front of the painting Guernica, painted by Picasso in 1937.

This painting – it immortalizes the massacre of the Basque town of Guernica, bombed in April 1937 by the Nazi air force which came to support General Franco during the Spanish Civil War – is “a manifesto for peace”, added Rima Abdul Malak.

This plea “takes on a necessarily special connotation” at a time “when war is raging at the gates of Europe and when we stand alongside the Ukrainian people,” insisted the minister, referring to Russia's invasion of Ukraine.

Beyond the political and historical references, the retrospectives organized within the framework of the “Picasso year” will be the occasion, according to the organizers, to also look into the “excesses” and the “contradictions” of the artist.

The figure of Picasso, long deified for his pictorial genius, has been tarnished for several years by accusations of misogyny and violence against his companions, placed in the spotlight since the #MeToo movement.

The author of “Demoiselles d'Avignon” and “La femme qui pleure”, who has spent most of her life in France, was notably accused by journalist Sophie Chauveau in her book “Picasso, the Minotaur” of being a “jealous”, “perverse” and “destructive” man.

“It is important that the public know better Picasso and also knows the part of violence that there was in him. This is something that should not be hidden,” Rima Abdul Malak acknowledged on Monday, while deeming it necessary “not to reduce all of Picasso's work” on this subject.

The report to the women of the Spanish painter and sculptor will be discussed in particular in the context of an exhibition planned at the Brooklyn Museum (New York) in the summer of 2023.