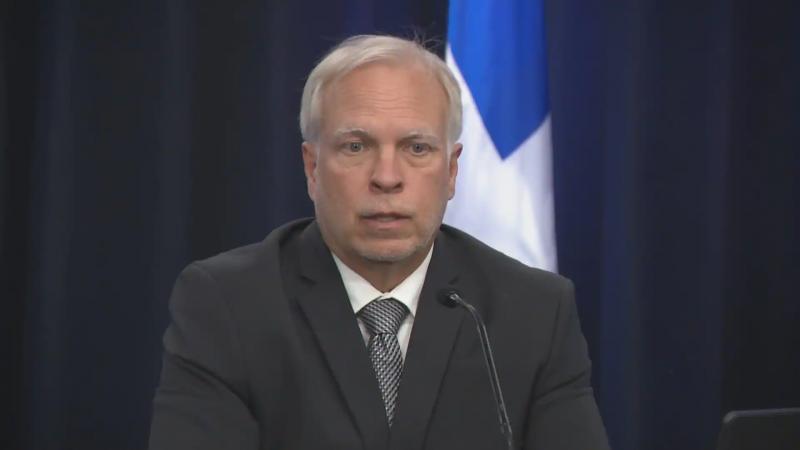 If only half of Quebecers plan to receive a new dose of the COVID-19 vaccine this fall, Public Health warns that the next vaccination campaign, which will begin on August 15, will be important.< /strong>

For the first time in seven weeks, there has been a decrease in the transmission of COVID in all age groups, underlined Dr. Luc Boileau, National Director of Public Health, in a press briefing on Thursday.

< p>Quebec reported Thursday 1389 new cases. A total of 2,136 people were also hospitalized with COVID. The majority of them nevertheless presented to the hospital for another health problem.

“The picture of the current situation is really encouraging for the future, he said. Almost everywhere in the world, it's the same situation, there is a drop.”

For Dr. Boileau, however, this does not mean that the pandemic is over. As it is very likely that the return to school will have the effect of reigniting infections, Public Health considers that the next vaccination campaign will be important, in particular for those most at risk of developing complications after contracting the virus.

However, Quebec does not plan to reinstate mandatory measures. “We would need epidemiological reasons to do so,” noted Dr. Boileau. For the time being, Public Health will content itself with continuing to issue recommendations.

The new vaccination campaign will therefore begin on 15 august. Public Health first targets living environments welcoming elderly or vulnerable people, such as CHSLDs and residences for the elderly.

“As was the case for the last few times, these people will not be required to make an appointment, because the teams will travel to these living environments to offer the vaccination,” said Dr. Luc Boileau.

Thereafter, the vaccination campaign will be gradually extended to the rest of the population. All the information to this effect will be communicated by mid-August.

A Léger survey revealed that nearly 40% of Quebecers n have no plans to seek a new dose of COVID-19 vaccine in the coming months.

“These people should listen to me more often,” joked the national director of public health, before emphasizing that “immunity acquired by infection or vaccination decreases over time.”

Dr. Boileau also invites the public to stop counting the doses. “We are now talking about booster doses (…), he explained. If it's been 5 months or more since you last had your dose, now is the time to get it.”

Moreover, the considerable proportion of Quebecers who do not intend to get vaccinated this fall does not worry the Director of Public Health, as long as it represents people at less risk.

Dr. Luc Boileau also provided an update on childhood vaccination. If few of them have received the vaccine in recent weeks, this is partly due to the summer holidays, but also because a “significant amount of children” have been infected with the virus recently.< /p>

The Director of Public Health recalled that the decision to have children vaccinated rests with the parents, while emphasizing that “vaccination has significant benefits”.

In addition, he affirmed that Public Health does not has not set a goal for the vaccination of children. “What matters to us are the vulnerable children,” he said.

As the number of cases of simian pox continues to increase across the province, Public Health has made the decision to expand access to the vaccine against this virus to “all men in Quebec, if they have or plan to have sex with other men”.

Recall that as of August 2, 373 cases of monkeypox had been declared in Quebec.

“Our concern is to see an expansion [ monkeypox] to other regions,” said Luc Boileau, recalling that Public Health is also making prevention and screening efforts.