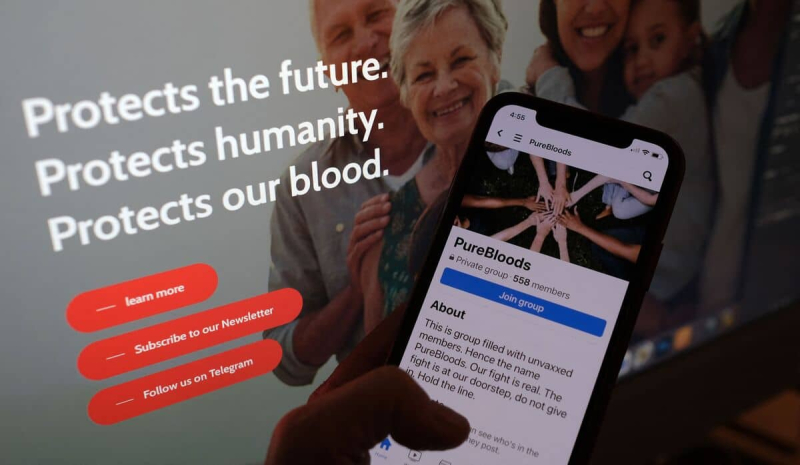 An anti-vaccine couple refusing a transfusion for a life-saving operation for fear of contamination, an organization connecting unvaccinated donors: misinformation about COVID-19 has given rise to a movement called ” pure blood”.

The movement spreads conspiracy theories that receiving transfusions from people vaccinated against COVID “contaminates” the blood.

These theories, however, are not based on “any scientific evidence,” said Katrine Wallace, an epidemiologist at the University of Illinois at Chicago, to AFP.

“If you donate the blood of a vaccinated person to someone who is not, the person receiving the transfusion does not become vaccinated.”

This does not prevent Internet users from speaking out in favor of the creation of blood banks dedicated to people not having received an injection, a request also received by doctors in North America.

Recently, a New Zealand couple objected to life-saving surgery for their baby, fearing he would receive blood from a vaccinated donor.

A court set them temporarily removed custody of the child to allow for the proceedings, but the case has become iconic for anti-vaccine activists.

These cases are “spreading like wildfire” on the internet, “drawing anti-vaccine conspiracy theories,” says Katrine Wallace.

In private groups on social media, advocates of this “pure blood” are calling for violence against caregivers who vaccinate – while claiming, falsely, that those who are immune are dying en masse.

Des images published on one of these groups show, for example, a nurse holding a syringe in the middle of a field strewn with skulls, noted an AFP journalist who infiltrated it.

An organization based in Zurich (Switzerland), Safe Blood Donation, even seeks to connect donors and non-vaccinated recipients.

The association, founded by a Swiss naturopath, George Della Pietra, promises on its site to obtain blood for its customers. It says it is present in Western Europe, North America, Africa and Asia.

“Many scientists and doctors have many concerns about COVID vaccines, and are also convinced that they enter the body through the blood, in a roundabout way, you might say, and stay there,” assures the 'AFP an official of Safe Blood Donation, Clinton Ohlers.

“Blood donations from people vaccinated against COVID-19 are safe for transfusions,” recalls Jessa Merrill, of the American Red Cross.

The components of the vaccine “do not end up in the bloodstream,” she adds.

Members of Safe Blood Donation must pay an entry fee of 50 euros and then an annual subscription of 20 euros, according to its site.

“The 'safe blood' movement is 100% based on misinformation about vaccines,” says epidemiologist Katrine Wallace. “And appealing to people's fears unfortunately pays off.”

The search for so-called “purity” does not is not limited to blood.

On social networks, posts aim to find breast milk from unvaccinated people, or even sperm – the “next Bitcoin”, conspirators predict.

It is difficult to estimate the number of people seeking 'unvaccinated' blood, but experts say finding it would be a challenge in countries with high vaccination rates anyway.

In the United States, where more than 80% of the population has received at least one dose, health authorities explain that they do not ask donors to have their vaccination status tested.

Hospitals cannot communicate this information to patients, in the case of blood donation.