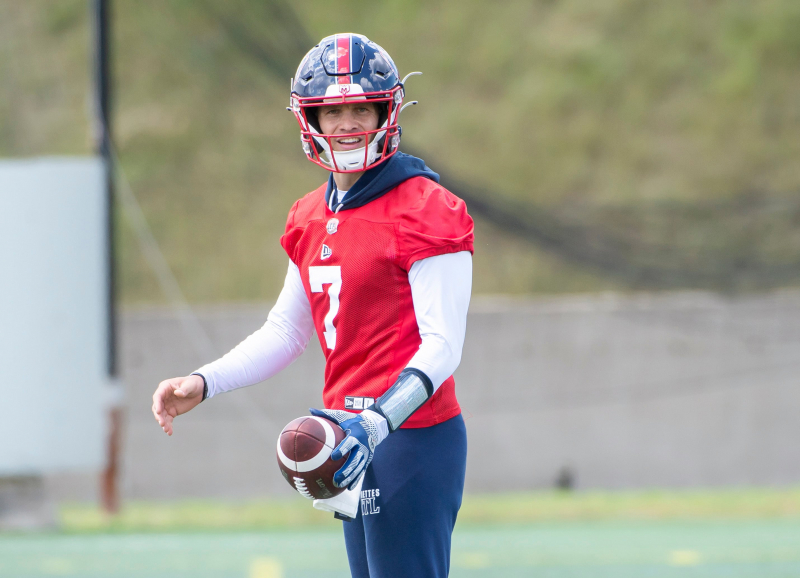 We are only a third into the Canadian Football League season, but already the two points at stake Thursday night in Hamilton have great value in the eyes of the coach -leader of the Alouettes, Danny Maciocia.

The interim driver is keen to build on last week's win over the Ottawa Redblacks, but he also recognizes that games against section rivals will be particularly important between now and the end of the campaign.

Is this duel against the Tiger-Cats one of those famous “four-point games”? for the Alouettes, against opponents who are only two points behind them in the standings?

“It's the opportunity to start a winning streak first,” Maciocia said. We have a great opportunity to get a second one. And the good news is that it's against an opponent in our section. So that adds to the value of those two points. ”

Better than their record

Yes, the opportunity is good for the Alouettes. Because if the team does not show the expected performance this year, with its record of two wins against four losses, ” good ” for second place, the Tiger-Cats do even worse.

In six games, Orlando Steinauer's men show a sad record of 1-5. They are third in this East section where only the Toronto Argonauts have a positive record (3-2).

Maciocia says he is surprised to see his rivals struggling so much.

“They're better than their record suggests,” he points out. I believe that is the case with many teams in the East, including Ottawa [0-6] who, like us, lost close games. ”

“The Tiger-Cats are a talented team, which, unfortunately, lacks opportunism during its games, adds the coach. I expect them to be tough opponents and for it to be a physical confrontation.

Dominique Davis at practice with the Alouettes last Monday.

This will be the first meeting between the Alouettes and the Tiger-Cats since last year's Eastern semi-final, during which Montreal suffered a 23-12 loss.

As if this were a premise of one of their main issues this year, the “Sparrows” were guilty of 15 penalties in the game.

They were also victims of five turnovers. Two traps, underlines Maciocia, that the Alouettes will have to “absolutely ” avoid against such “physical” training than the Tiger-Cats.

“They are built to impose themselves physically, he notes. They have good players on the defensive line and on the offensive line. And when they play in front of their fans, it's a very hostile environment. »

Fired three years ago weeks, former head coach Khari Jones will already be back with the Alouettes on Thursday night, having since been hired as a consultant by Hamilton.

To local media, the Tiger-Cats driver said that he will not be able to rely too much on Jones' expertise against Montreal.

“ It's a new regime, so we've just got a little taste [of what they'll do],” Steinauer said. running back Cariel Brooks, who had been on the sidelines since training camp.

As for the Alouettes, they announced on Wednesday that the name of Vernon Adams Jr. had been placed on the injured list for the game in Hamilton.

Harris must be well protected

Trevor Harris is wary of the Hamilton Tiger-Cats defense, and he's not the only one: for the Alouettes, the main order of Thursday night's game will be to protect the starting quarterback .

The veteran was the spark plug for Montreal last Thursday in the 40-33 win over the Rouge et Noir in Ottawa. The American completed 80% of the passes he attempted (25 for 31), for gains of 341 yards and two touchdown passes.

These statistics have earned him Canadian League MVP of the past week.

“But the Tiger-Cats are a whole different challenge,” Harris said after practice earlier this week. . Their defensive line is aggressive and they're betting on a lot of good players in this position. »

Recognized for his arms more than for his legs, the quarterback had also tasted the medicine of Hamilton during the Eastern semi-final last November, at Tim Hortons stadium, lost by the Alouettes on account of 23 to 12.

With pressure from the Tiger-Cats defensive front, Harris had been hit with six sacks. Two of them allowed the locals to add points to the scoreboard.

“The line of scrimmage will be important [Thursday night],” said interim head coach Danny Maciocia. We have to protect Trevor Harris! If we are able to do it, it will increase our chances of going for the victory. »

Even if the quarterback had often been left to his own devices during this game, he still managed 28 of his 44 pass attempts (63%) and a touchdown. More than respectable figures in the circumstances.

Seeking to vary the strategies, the product of Edinboro University also distributed the ball to seven different receivers.

Maciocia believes that the protection that will be offered to his starter will again be the difference between a win and a loss on Thursday night.
“If he is well protected, he is going to be able to distribute the ball to his receivers who, they will be able to run games,” he said, adding: “Without this protection, it will be a long night for us.”