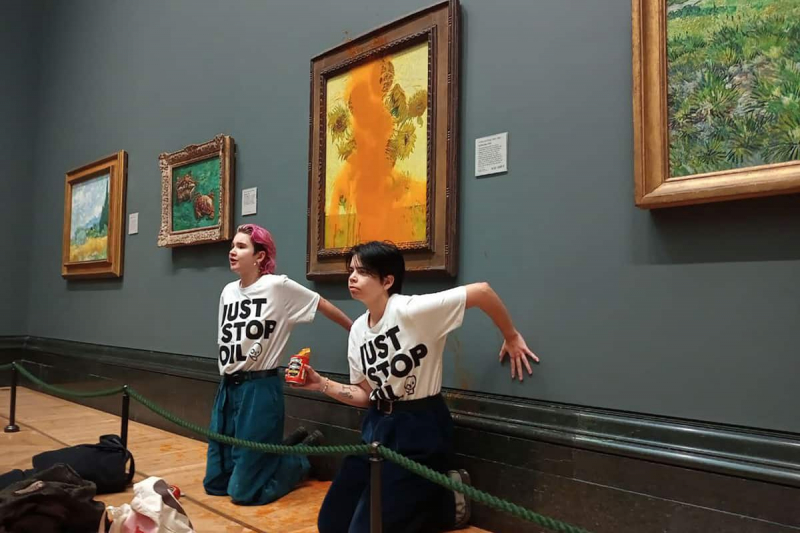 Before Van Gogh's 'Sunflowers' doused in tomato soup on Friday in London, other works of art were vandalized while on display in a museum. Here are some precedents:

At the end of May 2022, “La Joconde” is encrusted at the Louvre Museum in Paris, without consequence since it has been placed behind armored glass since 2005.

In 2009, a Russian visitor to the Louvre was arrested after throwing an empty teacup in the direction of Leonardo da Vinci's work. The museum then explained that the cup had broken against the armored display case, which had been very slightly scratched.

Buren with a knife

In 2019 , a man attacks with a knife a work by visual artist Daniel Buren “Painting. Manifestation 3″, exhibited at the Center Pompidou Museum in Paris.

Felt on a Delacroix

In 2013, a young woman wrote “AE911” in felt tip pen on Eugène Delacroix’s painting “Liberty Leading the People” exhibited at the Louvre-Lens. The inscription referred to conspiratorial theories linked to the September 11 attacks. The author justifies her gesture by her desire to “raise the level of consciousness of the people”. She received an eight-month suspended sentence.

Black paint on a Rothko

In 2012, at the Tate Modern in London, a painting by the American Mark Rothko was vandalized with black paint by a Polish artist of Russian origin who claimed authorship of the graffiti inscribed in a corner of the work. < /p>

In 2011, a woman attacked one of Paul Gauguin's most famous paintings, “Deux Tahitiiennes”, exhibited at the National Gallery of Art in Washington. After trying to take down the painting, she pummels the center of the canvas with her fist. Arrested by security guards, she explains that she wants to destroy it because it depicts nudity and homosexuality.

Punch in a Monet

Still in 2007, a painting by Claude Monet, “Le pont d'Argenteuil”, was punctured by “a punch” given by several drunken young adults, who broke into the Musée d'Orsay in Paris.

In 2006, the “Fontaine” urinal, one of Marcel Duchamp's emblematic works, was the target of a post-dada artist, Pierre Pinoncelli, who cut the ceramic with a hammer and affixed the word “Dada” to it. , during an exhibition at the Center Georges Pompidou in Paris.

This conceptual artist had already, in 1993, damaged Duchamp's work with a hammer, after urinating in it.

Petrol on a van der Helst

In 2006, a major painting in the Rijksmuseum in Amsterdam, “Celebration of the Peace of Munster” by Bartolomeus van der Helst, was damaged by a 69-year-old man, who doused it with lighter fluid and attempted to set it on fire. The perpetrator, a 69-year-old German, had been convicted several times for the destruction in Germany of 165 works.

In 1998, a self-portrait by Rembrandt was smeared with yellow paint by a young man at the National Gallery in London. The rapid intervention of art experts saves the painting representing the Dutch master of the 17th century.