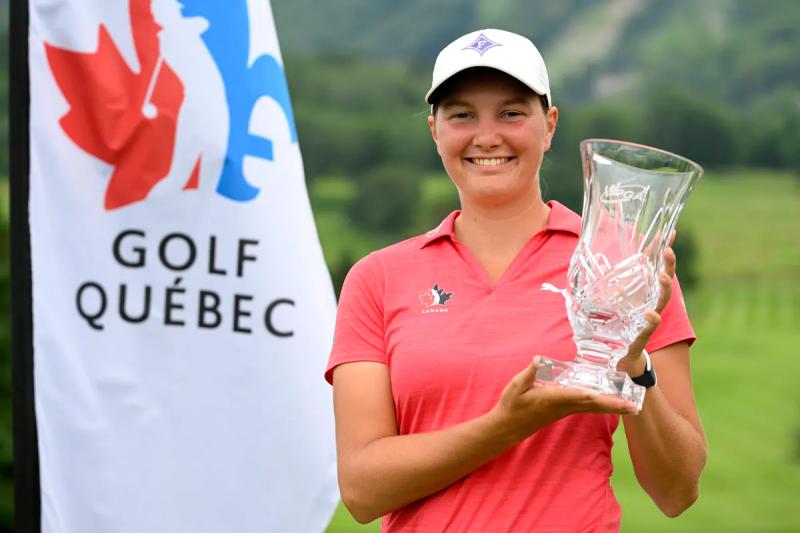 Quebecer Sarah-Eve Rhéaume led the PGA Women's Championship of Canada from start to finish at the Château-Bromont Golf Club to claim the title on Friday.

The amateur player from Quebec, who is part of the Fairmont State University team in South Carolina, chose the right moment to have the best round of the tournament, delivering a card of 66 (-7). Rhéaume scored no less than nine birdies.

This excellent result allowed him to conclude with a total score of 207 shots (-12), three shots ahead of South Korean Min-G Kim, who hounded throughout the tournament. Ontarian Rebecca Lee-Bentham completed the podium at 215 strokes (-4).

She goes down in history as the first amateur to win this event since Ontarian Brooke M. Henderson, in 2014. No Quebecer had won the Lorie-Kane trophy since Marie-Josée Rouleau in 2006.

Being neither a professional player nor a member of the PGA of Canada, Rhéaume got hold of no purse. Kim, meanwhile, will leave Bromont with a check for $15,000.

Among the 14 Quebecers in this tournament, Caroline Ciot also stood out with fifth place in the final standings. She lost feathers on this third day with a card of 75, her worst of the tournament.