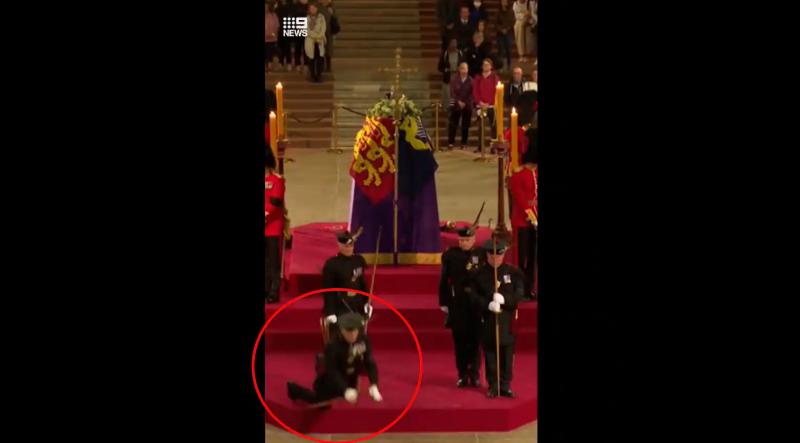 A royal guard who stood alongside the coffin of Elizabeth II in Westminster Hall on Wednesday passed out and fell face first to the ground as the public filed past in state.

In the footage that has gone viral, the guard, dressed in a black uniform and holding a stick, appears to initially stumble from his position on the catafalque.

He briefly descends from the platform and appears dazed. He pulled himself together before resuming his position. Moments later, he fell violently, landing face down.

Two men rushed to help him.

The BBC, which was broadcasting the ceremony live, cut off its signal for several minutes as emergency services responded, the Daily Mail reported.

The Queen's coffin is guarded 24 hours a day by members from Royal Guard duty.

The incident came as hundreds of thousands of mourners lined the streets of London until 30 p.m. to pay their respects to the Queen , who died last Thursday at the age of 96 after a 70-year reign.

Mourners will be asked to walk past the casket without stopping to ensure the line moves quickly throughout the day and night.

The Queen's body arrived at Westminster Hall around 3pm on Wednesday, followed by her son and heir, King Charles III, and her grandsons, Prince William and Prince Harry.

The Queen's coffin will be transported to Westminster Abbey for the funeral next Monday.