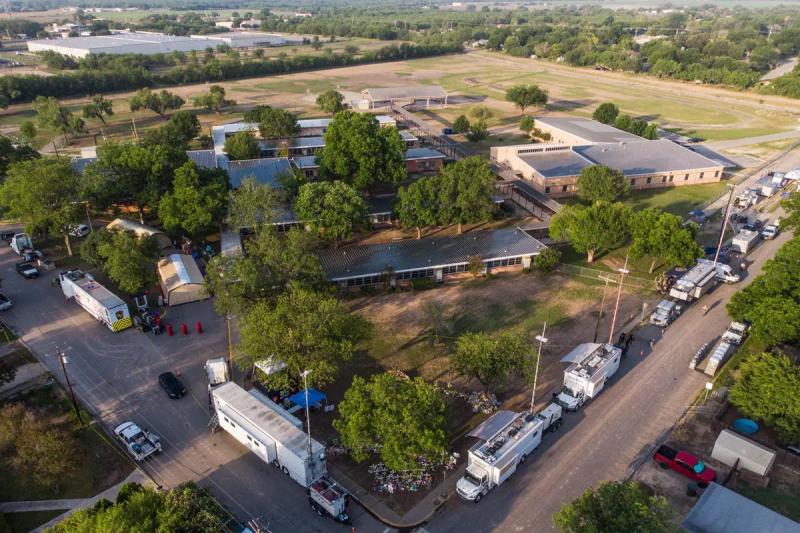 Nearly excruciating video, revealed by local media on Tuesday, shows how police waited 74 minutes before intervening in a gunman who on May 24 killed 19 children and two female teachers at a school of Texas.

The footage, captured by surveillance cameras, a cell phone and an officer's dash cam, was posted online by the Austin-American Statesman newspaper and the KVUE television channel.

Claimed by relatives of the victims, but never made public by the authorities, they are overwhelming for the police, whose action has been described as “an absolute failure” by the Director of Public Health of Texas, Steven McCraw.

For almost an hour and a quarter, we see dozens of agents arriving, increasingly heavily armed, without any of them entering the classroom where the shooter is. entrenched with his little victims.

The film begins with the arrival of this 18-year-old young man, who crashes his vehicle near the Robb primary school in Uvalde. Two people come to his aid and are greeted by gunfire. As they leave running, we see him progressing towards the establishment.

The film is accompanied by an excerpt from the emergency call made by an employee at 11:32 a.m., who shouts to the children “go to your classes”.

At 11:33 a.m., the shooter walks almost nonchalantly into the school, even slips a lock of hair behind his ear while holding his assault rifle pointed towards the ground.

A young boy then appears at a corner of the corridor, about to follow him, when he sees him pointing his gun towards a room and opening fire.

From there, the detonations s quickly followed for three minutes, until the first police arrived at 11:36 am.

There were at least eight of them, with handguns and bulletproof vests. They advance first towards the class, explosions ring out and they retreat to the end of the corridor.

Thirty-six minutes later, they are still in the same place, but have been joined by other police officers equipped with rifles, bulletproof shields and even sometimes helmets.

They are at the less than twenty, from different units, but still do not enter the classroom.

Troubling detail, at 12:30 p.m., one of them helps himself to hydroalcoholic gel from a dispenser hanging on the wall.

At 12:50 p.m., shots rang out. A team eventually took down the shooter. The movie stops.

“Police in combat gear wait in the school hallway and even stop to get hand sanitizer while children and teachers are being massacred! “, she chokes, asking for more transparency on the failures of the police.

Several investigations have been opened, in particular by the Ministry of Justice, but their conclusions have not yet been published. been returned.