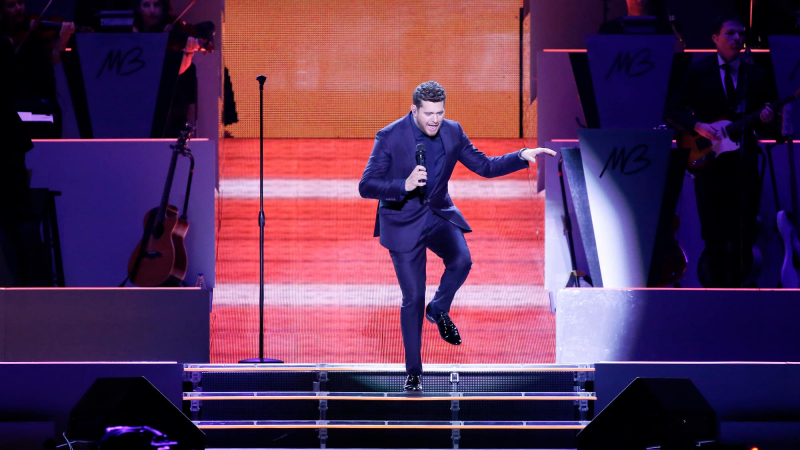 Friendly, charismatic and a charm to the power of ten, Michael Bublé offered an evening of music full of fun and magic at the Videotron Centre. A concert where quality, in all its forms, was there.

The singer from British Columbia showed up in Quebec with a huge production. He was accompanied by a solid and efficient big band with around thirty musicians, three choristers and even a gospel choir, performing on an inclined four-level stage. It was very classy.

A very nice stage with a long catwalk leading to another, smaller stage where he went to pay tribute to Elvis with Fever, One Night, All Shook Up and Can't Help Falling in Love. A successful segment that ended under a heavy rain of confetti.

There were also several giant screens, two of which were installed above the floor, allowing spectators further away in the stands to see “their” up close Michael. The sound system was perfect.

In voice, the 47-year-old singer delivered his hits and covers to an audience quite different from what we usually see at the Videotron Center. A large audience made up of couples, young women, accompanying men and mothers with their daughters. Well-dressed people. Let's say that the traditional black t-shirts with skulls, on Wednesday, there were none.

Like the day before in Montreal, Michael Bublé was a little late, showing up on the boards about twenty minutes late.

When the countdown, on the curtain, showed 37 seconds, people showed up with shouts and applause. We were looking forward to it.

“The most beautiful city in Canada is Quebec. I'm so happy to be here,” he said, after the Feeling Good and Haven't Met You Yet, double kicked off his delivery.

He had the amphitheater lights turned on to get a good view of “his” world, three years after his last visit in the summer of 2019.

“This is not a concert. It's a party. I love my Vancouver, but I know you know how to party. You guys are crazier,” he said, before asking the crowd to do a little “YMCA” and continue with L-O-V-E, popularized by Nat King Cole.

He parades and runs on the catwalk, exchanges with the public, does a little 360 ​​on himself and he will put on, at the end of the performance, a Nordiques jersey, indicating that it is time for the National League to return to Quebec.< /p>

After Higher, from his latest opus, he asked the crowd if they wanted to go on tour with him.

In addition to charming with words, Bublé also does it very well with his songs, while we found covers well selected from Sway, When Your Smiling (The Whole World Smile), an excellent version of To Love Somebody, by the Bee Gees, then Smile, composed by Charlie Chaplin, where he was accompanied on the piano, and Always On My Mind.

And what about Barry White's with You're the First, The Last, My Everything, with a voice, let's say, a little less suave. Just fun. Lots of fun.