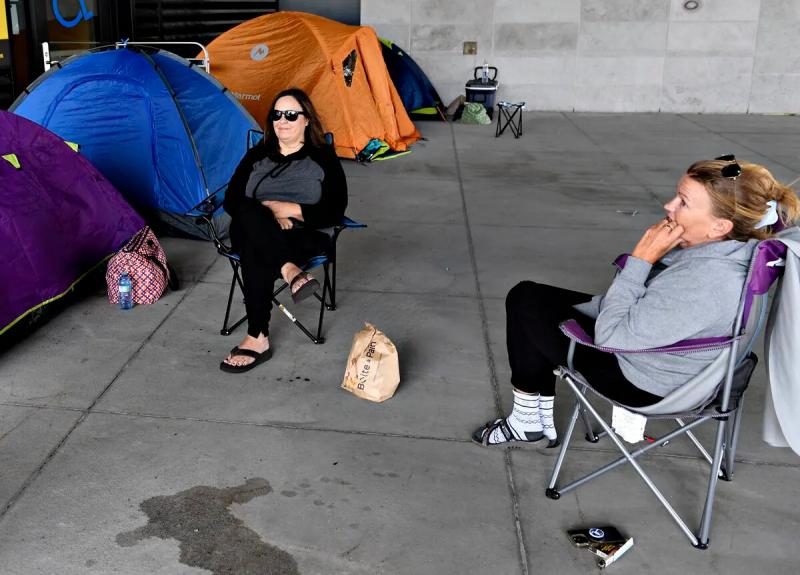 Pearl Jam fans from the United States and Canada have been camping outside the Videotron Center since Tuesday so they can spy their favorites up close Thursday night during the first concert of the northern tour -American of the group.

Four tents were already pitched at the northwest entrance of the amphitheater, Wednesday noon, during a visit by the Journal.

As was the case in 2016 during Pearl Jam's last visit to Quebec, fans from all over America decided not to miss their chance to have the best seats for this concert in admission general, even if it means spending more than 48 hours outside.

“You want to be in front. That's the passion,” explains Matthew Gagné, a member of a fan group from Maine. as well as her friend Lory Tone, from Toronto, will also be in the front row.

“The people at the Videotron Center are very accommodating. Not everywhere they let us settle in like that,” says Ms. Tone.

Arriving early is the mark of the real ones. Matthew Gagné chose to spend two nights under the stars. Without tent.

“I have a chair and a sleeping bag. That's all I need, “says the one who has nearly thirty Pearl Jam concerts to his credit.

For her part, Kathy Brehan has seen eleven concerts, this summer, across Europe, including her fiftieth since following the quintet from the grunge movement of the 1990s.

Does Eddie Vedder ever recognize you, we asked him? “I think he recognizes my Wonder Woman sunglasses that I wear during the shows,” she smiles.

Soundtrack of a lifetime

For many, the music of Pearl Jam is closely linked to important events in their lives.

“I moved to Seattle in 1992, when everything was happening musically. I met my husband and all their music enveloped my wedding. These are just good memories. They make us feel so good,” says Kathy Brehan.

Ditto for Matthew Gagné. “It's the soundtrack of my life. Every song and every album reminds me of where I was when they came out. »

It is indisputable, the reunion with Pearl Jam is eagerly awaited in the capital. This concert was the first to be postponed at the Videotron Center, in the spring of 2020, when COVID-19 began to decimate the show schedule.

There are only a few hundred tickets left to sell. , which suggests that we could be approaching the figure of 17,500 spectators in 2016, which remains one of the largest crowds in the history of the Videotron Centre.

As to know what Pearl Jam has in store for us on Thursday is a surprise. The group rarely, if ever, gives the same concert twice and is used to giving marathon performances.