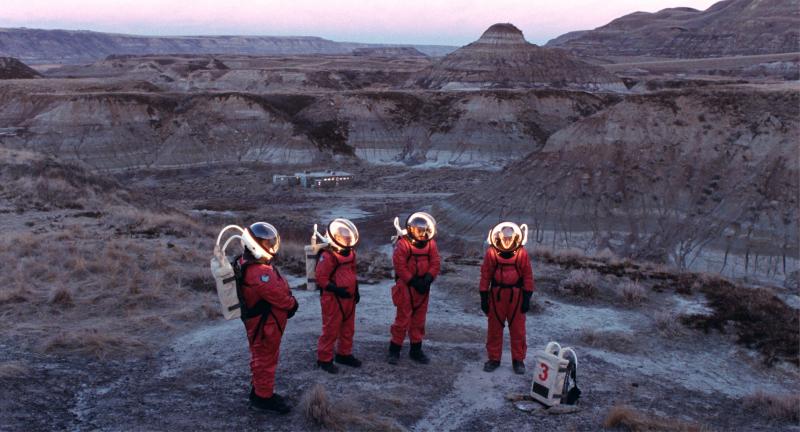 Sci-fi and comedy don't always mix in the movies. With Viking, his 4th feature film, filmmaker Stéphane Lafleur has succeeded to brilliantly marry the two genres to sign a most successful quirky comedy.

We missed Stéphane Lafleur. After directing three unique first feature films with a very strong signature (Continental, a film without a gun, On familiar ground and Tu dors Nicole), the filmmaker kept us waiting for eight years before returning with this tasty 4th opus, certainly his best and most accessible to date.

The scenario of Viking(which Lafleur co-wrote with Éric K. Boulianne) is based on a totally original idea that surprises from the outset. We follow the path of David, a physical education teacher who volunteers to collaborate on a manned mission on March.

With four other Quebec volunteers, David will be called upon to form a B team of alter egos of the five American astronauts sent to Mars. Having been chosen because they each have similar psychological profiles to their American counterparts, our five fake astronauts will have to go through a simulation of the Mars mission, isolated in a hidden bunker in the middle of a desert in the United States. . The goal? Attempt to anticipate and solve from a distance the interpersonal problems encountered in space by real astronauts.

At the end of the dream

Stéphane Lafleur and Éric K. Boulianne could easily have gotten lost in venturing into writing a screenplay based on such a rich and ambitious concept. But the two accomplices have managed to maintain a certain authenticity in their story by remaining glued to these deeply human characters.

Staged with surgical precision by Lafleur, Viking multiplies the situations absurd and delirious, distilling a fine and joyfully quirky humor.

In addition to its irresistible humor, its overflowing imagination and its touching reflection on the need to go after one's dreams, the film also amazes on the visual plan thanks in particular to the sublime and often poetic images of the director of photography Sara Mishara (The drunken birds). To put it simply: this Viking is a great achievement.

A film by Stéphane Lafleur