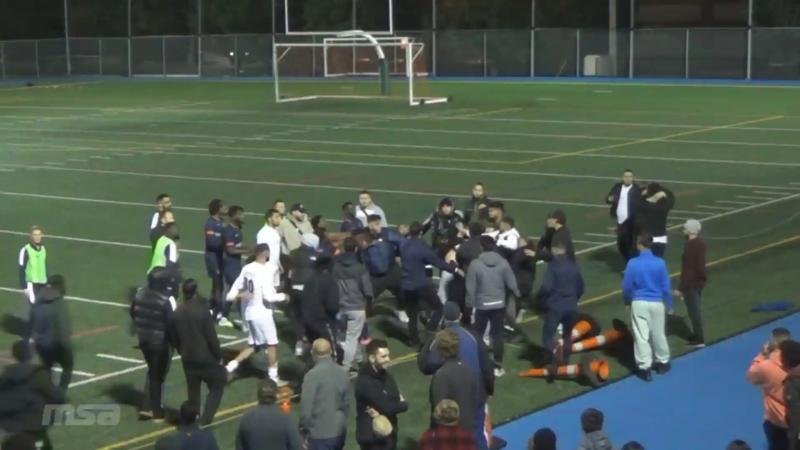 A general fight broke out during a soccer game in a semi-professional level league in Dollard-des-Ormeaux, on the island of Montreal, last Saturday.

Nearly 1,000 spectators, including several families, attended the thrilling game between CS St-Laurent and CS Mont-Royal Outremont for the finals of the Premier League Soccer of Quebec (PLSQ).

In a video obtained by TVA Nouvelles, we can see a spectator enter the soccer field, then jostle a referee and a player.

In view of this action, the referee made the decision to expel the spectator and to suspend the game.

A general fight broke out between the supporters shortly afterwards.

“This incident primarily involved spectators, but a few players also joined in,” read a statement released by the soccer league.

In the fray, a mother and son, she was trying to protect, were knocked to the ground. The mother has also filed a complaint with the police.

Violent fight during a @PLSQ1 match. Witnesses saw people armed with golf clubs and baseballs. The @spvm is investigating. A mother and her son were knocked to the ground. +/- 1000 people in the stands. Tonight at @tvanouvelles pic.twitter.com/0TLASa44eh

Witnesses also reportedly saw youths with golf clubs and baseballs in the nearby parking lot.

CS Mont-Royal Outremont coach Luc Brutus said there was “electricity in the air”.

“Shocked yes, but it's much more surprise and astonishment that it could happen,” he told TVA Nouvelles.

“The leaders of the PLSQ chose to be tough in order to avoid that these types of events are repeated and have decided to apply the regulations to the letter”, continues the press release from the organization.

With the growing popularity of soccer, the general manager of Soccer Québec, Mathieu Chamberland, notices that there is more and more overflow in the stands.

Security agents could be hired to ensure the protection of fans and players.

CS St-Laurent's next match for the PLSQ Cup will have to be played behind closed doors, the organization said.

Several spectators in the stands called 911 when the fight broke out. When the authorities arrived, the people involved quickly dispersed.

Fr Last May, TVA Nouvelles reported the attack on a 17-year-old referee on the same soccer field.

CS St-Laurent was also involved in this other event.