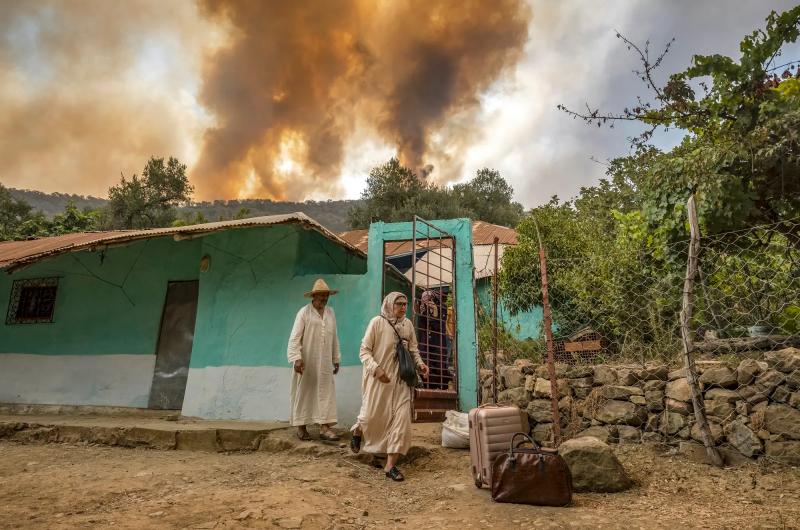 Moroccan firefighters and soldiers were working late Thursday to control several fires that progressed during the day in isolated wooded areas in the north of the kingdom, local authorities told AFP.

These forest fires, fanned by a strong wind, have so far caused no casualties, but have caused the evacuation of nearly 500 families “as a precaution” in the provinces of Larache and Taza, according to official statements published in the evening.

The fires are ravaging forests, which are difficult to access, in the provinces of Larache, Ouezzane, Tetouan and Taza, in northern Morocco, said Fouad Assali, director of the Forest Climate Risk Management Center (CRCF).

Several douars had to be evacuated of their inhabitants. Four Canadair water bombers from the army and four others from agricultural spraying operated until the end of the afternoon above the areas engulfed in flames near Ksar El Kebir, noted a photographer from AFP.

In stifling heat, well above 40 degrees, surprised by the speed of the fire's progression, villagers hastily left their homes, bringing with them cattle and horses, when possible.

A small village in the Ksar El Kebir region was completely destroyed by the flames.

“Efforts are continuing in the hope of bringing these fires under control in the next few hours,” explained Mr. Assali, quoted by MAP news agency.

“Yesterday evening, I was with my family and at one point we heard people shouting: “Fire! Fire !”. We went out to flee and fortunately, thanks to God, the fire was directed towards the top of the mountain”, testified Samir Boundad, a young man from Larache.

Hundreds of elements of Civil Protection, Waters and Forests, the Royal Armed Forces (FAR) and the Gendarmerie, assisted by local volunteers, take part in firefighting. About a hundred fire trucks and tankers, ambulances and earthmoving machinery were mobilized.

In total, at least a thousand hectares of forest – oaks, pines and other conifers, fruit trees – have been ravaged since Wednesday evening in the provinces of Larache, Ouezzane and Taza, according to local authorities.

Morocco has been hit for several days by a heat wave, with temperatures approaching 45 degrees, in a context of extraordinary drought and water stress.

“It is the heat that causes this kind of of fire. It was yesterday at dawn that the fire reached our village, but we are confident that the firefighters will put it out,” Ahmed Mezouar, 58, a resident of Larache told AFP.

“We are afraid for our homes. A nearby village was completely surrounded by fire. The inhabitants were evacuated by the firefighters, for the moment we are safe from the fire”, he reassured himself.

On the other side of the Strait of Gibraltar, the fires are rage in southern Europe, from Portugal to Greece, via Spain and France.