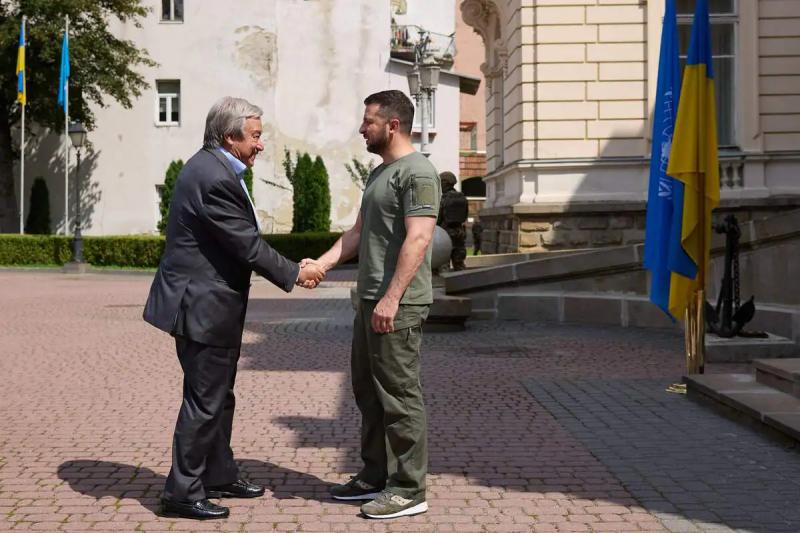 ODESSA, Ukraine | UN Secretary General Antonio Guterres asked Russia on Friday not to cut the Zaporizhia nuclear power plant, which it controls and which kyiv and Moscow accuse each other of threatening with their bombings, from the Ukrainian network.

In the east, the fighting continues, particularly in the Donbass, a priority strategic objective for Moscow that its forces continue to shell and where 5 dead have been recorded in the past 24 hours in the province of Donetsk alone, according to the Ukrainian authorities.

Mr. Guterres continued Friday in Odessa, the great port of southern Ukraine, his visit to the country which had first led him the day before to Lviv (west).

In it, he asked Russia not to cut off the Zaporizhia nuclear power plant from the Ukrainian electricity grid, which has been controlled by Russian troops since the beginning of March and whose security is worrying because it is close to the war front.

< p>“Of course, Zaporizhia's electricity is Ukrainian electricity (…) this principle must be fully respected,” Guterres told a press conference on the sidelines of a visit to the port of Zaporizhia. Odessa.

According to Energoatom, the Russian military is seeking supplies for generators in that would be activated after the reactors were shut down and limited personnel access to the site.

Moscow and kyiv have accused each other in recent weeks of bombings that have targeted this nuclear power plant located in southern Ukraine, raising the specter of a major disaster in Europe, 36 years after that of Chernobyl, also in Ukraine.

A Western diplomat told AFP on Friday that Westerners were mainly worried about maintaining the water cooling of nuclear reactors, more than the impact of a shot on this plant “built for withstand” the worst impacts, “even the crash of an airliner”.

Thursday in Lviv, where he met Ukrainian Presidents Volodymyr Zelensky and Turkish Recep Tayyip Erdogan, said he feared a “new Chernobyl”, believing that “any potential damage to Zaporijjia would be suicide”.

“Seriously concerned”, he had called for the demilitarization of the plant to prevent it from being used “for any military operation whatsoever”.

Thursday, the Russian army had firmly denied having deployed “heavy weapons in and around the plant, as kyiv has accused.

The pro-Russian occupation administration in the Zaporizhia region accused Ukrainian forces of bombing the town of Energodar, near the power plant.

Mr. Guterres' visit was marked by another subject of concern at the global level: Ukrainian grain exports.

Holded up after the Russian invasion on February 24, which raised the specter of a global food crisis, they have resumed after the conclusion in July of an agreement between Moscow and Kyiv, with the mediation of Mr. Erdogan.

During a joint press conference with MM. Zelensky and Erdogan, Mr. Guterres promised on Thursday that his organization would work to “intensify” Ukrainian grain exports before the onset of winter.

They are particularly crucial for the food supply of many African countries, Ukraine being one of the world's leading producers and exporters of cereals.

As a result of the July agreement, 25 ships carrying “more than 600,000 tons of Ukrainian agricultural products” have passed through the “grain corridor” since this week from the ports of Odessa, Pivdenny and Chornomorsk, according to kyiv.

M. Guterres welcomed a “beginning of stabilization” in agricultural markets since the deal.

But “there is still a long way to go before this translates into people's daily lives , in their bakery and in the markets”, he nuanced, pointing to the “disrupted supply chains” and the “unacceptable energy and transport costs”.

After Odessa, Mr. Guterres plans to travel to Turkey to visit the Joint Coordination Center (JCC) which oversees the implementation of the July agreement.

In the east, Russian bombing killed at least five people and injured ten in several localities in the Donetsk region, one of the two provinces of Donbass, announced its governor, Pavlo Kyrylenko , on social networks.

Russian artillery has been advancing slowly in recent weeks in Donbass, a region that was already before the current conflict, since 2014, partly in the hands of pro-Russian separatists, and that Moscow, which has made it its strategic priority, intends to conquer completely.

Bombings also hit Kharkiv, Ukraine's second city, early on Friday, killing at least one person, according to local authorities. At least 12 other people had died in the same way in the area in the past two days, they said.