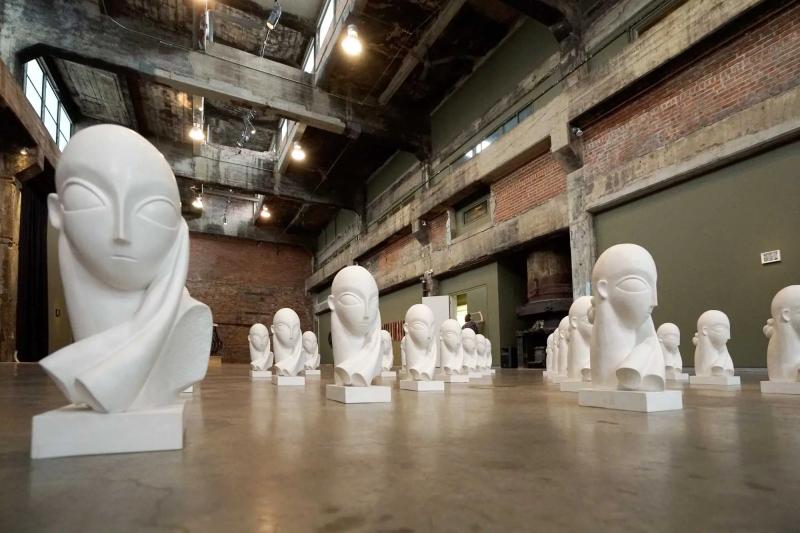 From a former metal foundry to an abandoned place in a once little-known district, the Darling Foundry has become a space for creation and dissemination dear to artists and visual art lovers. The exhibition centre, which also houses artists' studios and residences, is celebrating its 20th anniversary this year.

“I often say that the wind has blown here, in this extraordinary city that is Montreal and in this industrial district which had enormous potential (the former Griffintown), launches Caroline Andrieux, founder and general and artistic director of the Darling Foundry. We are very happy to have saved the Darling Foundry, which is a unique place made up of two buildings.”

View from the 2nd floor of the Darling Foundry.

In two decades, nearly 500 visual artists have exhibited or performed at the Darling Foundry. Exhibitions are held in the former foundry and 13 artists' studios have been set up in the neighboring former warehouse (nine to accommodate Montreal artists – and four with attached residences for visiting artists).

In this place where artists try to imagine ways in which the past (the history of workers) and the future (their often avant-garde visions of creators) manage to inscribe us in a present, the idea is to question the visitor. On the place where it is located, in particular, in this present time.

We thus celebrate these 20 years of existence in three stages. With a historical exhibition telling the story of the three Darling brothers, from the creation of the factory in 1888 to its closure in 1991, then the abandonment for 10 years of this building destined for demolition.

You wrap me and I contain you is a retrospective exhibition bringing together 11 artists who took an interest in the programming of the place, paid tribute to a particular event held there or are inspired by the place itself in their creation: all with the idea of ​​revisiting the Darling Foundry down to its basement.

Then there will be a real anniversary, on October 27, with announcements of the gifts offered to highlight the event, including a retrospective catalog and an outdoor public square.

“The greatest source of pride is the public,” says the founder. Young people love the Foundry and that fills me with happiness, because I tell myself that there is a generation that will integrate art into their daily lives.”

To support the Darling Foundry, join or participate in its fundraising campaign: fonderiedarling.org