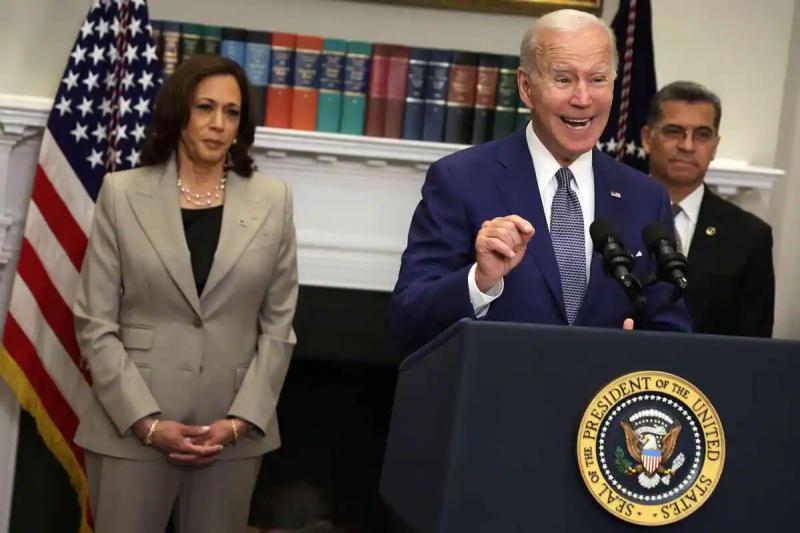 Criticized for his defense of the right to abortion, which is considered timid, Joe Biden on Friday called on voters, and especially women voters, to vote en masse in the next legislative elections to counter an “out of control” Supreme Court and Republicans' “extreme” privacy plans.

“For the love of God, there's an election in November, vote, vote, vote,” the US president asked in a short, pugnacious speech at the White House.

And if the Republican Party won these elections and passed a law banning abortion throughout the country, Joe Biden promised to oppose his “veto”.

His intervention, whose pretext was the signing of a decree on a series of very limited regulatory actions, is above all for Joe Biden an attempt to regain control in the face of insistent criticism in his own camp.

Many Democrats and activists believe the president and his administration, who seemed taken aback on June 24 by a predictable Supreme Court ruling against abortion rights, should do more, or failing that, be more politically aggressive.

Saying he is convinced that a “record number” of American women will vote in the midterm elections scheduled for November, Joe Biden admitted: “this is the fastest way” to restore the right to abortion in all the country, via a federal law.

The president unleashed his blows on the “out of control” Supreme Court, which ended the constitutional right to abortion that all American women had enjoyed since 1973, and against the “radical” positions of the Republican Party.

“Now is the time … to protect the nation from an extremist project”, which could also jeopardize the right to contraception or marriage for all, said Joe Biden.

The 79-year-old Democrat was also deeply moved by the fate, reported by the press, of a 10-year-old girl, pregnant following a rape, and forced to leave her state, Ohio, to terminate the pregnancy.&nbsp ;

“10 years, 10 years”, he repeated, launching: “Put yourself in the place of this little girl!”

The President wants to act

Joe Biden then signed an executive order launching a series of initiatives, limited in scope, to protect access to abortion and the constitution.

The White House promises, among other things, to “protect sensitive health information” and “fight digital surveillance”.

Many activists warn of the dangers linked to online data, from geolocation or applications for monitoring menstrual cycles, that could be exploited to prosecute women who have had abortions.

The text signed on Friday also provides for the protection of mobile clinics practicing abortion at the external borders of states that have banned it.

The White House also wants to guarantee access to contraception, in particular to morning-after pill and IUDs.

The US executive also intends to organize a network of volunteer lawyers to help women with legal issues.

These announcements are necessarily limited in scope. Despite his reputation for power, the American president can't do much when, as is the case for Joe Biden, he has to battle against a Supreme Court and numerous hostile states without having a solid parliamentary majority.

Many Democrats, however, already fear that the attempt at electoral mobilization will flop, coming from an unpopular president, and while galloping inflation is the biggest concern of households.

Au Beyond the right to abortion, some wonder if Joe Biden, a relentless centrist who is reluctant to show off, is cut out to face an ever more virulent American right, in an ever fiercer political climate.

One only has to read the editorials that follow one another in recent days, including in reputedly progressive or center-left newspapers: “Is Joe Biden the wrong president at the wrong time?” The Washington Post wondered recently, while The Atlantic wondered: “Is Biden a man of his time?”