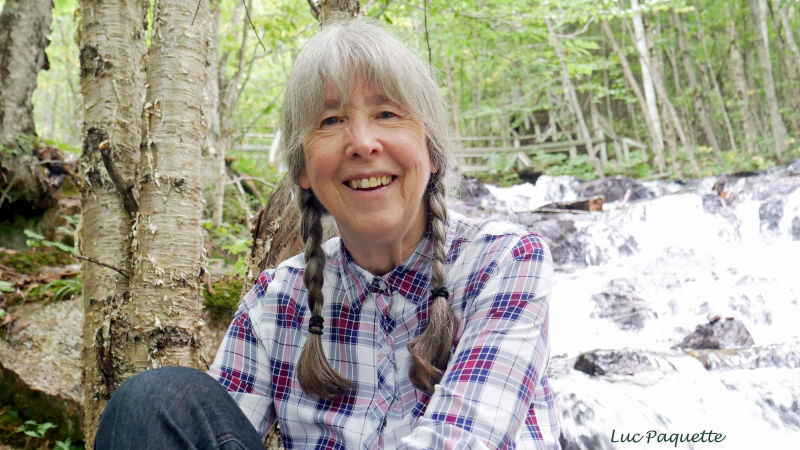 Last volume of a great historical fresco begun in 2004, with a finale that comes full circle, Wabassee proves the immense talent of writer Francine Ouellette. With a gift for bringing bygone eras to life, an incredible attention to detail, meticulous research, she has created characters that are authentic and alive. With intensity, she brings to life a little-known period in the history of the Lièvre River, a splendid and somewhat unknown forest region of which she reveals some secrets.

The plot of this sixth and final part takes place in a forest area called the Wabassee, which is roughly located between Mont-Laurier and Notre-Dame-du-Laus, in the Laurentians.

The history of the Lièvre River territory is little known.

“Our whole history has been shaped by the waterways. Exploration was done by rivers, logging too. The French, when they arrived, discovered nothing: they just followed the Indians who made them discover things. This is what is special, I find, with our history: the importance of waterways.”

Francine Ouellette notes that she tries to identify historical reality through her people, exploring different angles. Thus she speaks of the Aboriginals who lose their living space, of the French Canadians who are in search of a living space and of the Anglophones of power who have come to control both the torrents and the men.

“I keep studying history. They did archaeological digs in the area and I followed the archaeologists. I study the story, so I can tell it well. I want us to live it, to become these characters.”

The writer recalls the importance of the log drive in her region, an activity that continued until 1994. “I had an uncle who was a lumberjack. I thought I knew…but when I was starting to flirt with the idea of ​​writing a historical saga, I met a 90-year-old log driver. T'sé, the guy with the big, sturdy hands. He still had all his head.”

He told him about Jos Montferrand, about the Wabassee farm where he had worked.

“The other side, there was an Indian girl who made moccasins for him when he was a little guy. She was measuring her foot on birch bark, like Mary will do with Patrick's children in the novel.”

He told her about the cageux, those forest workers who took care of steer rafts made of tree trunks.

“I didn't even know rafters existed. He was a good fellow who was uneducated, but he transmitted the word. He had known that and when he was little, his idol was Jos Montferrand. It's fascinating.”

It was certainly a difficult life. “The log drivers were acrobats, on logs. I tried to stand on a block: not able!” she says. “My old log driver told me that his uncle, who was a log driver, was able to travel as he pleased on a log. He had to go down the stream. Sometimes he said: get on the block, my little guy, and we'll go to my uncle so and so on the other side of the river!”

♦ Francine Ouellette has won numerous literary awards, including the Ludger-Duvernay Prize for her entire body of work.

♦ Her novels In the Name of Father and Son and The Sorcerer have been the subject of television series which have won over two million viewers.

“At the sight of loading activities and boarding sessions taking place at the landing stage of the Landing, William Thompson hurried on. In a few minutes, the steamboat that shuttles between Buckingham and High Falls will sound its three whistles announcing the departure.

He has just made an agreement with MacLaren to take care of the logistics of a trip decided by Lomer Gouin, Minister of Colonization. The group of this expedition in the hinterland consists of a good thirty people. The latter will leave Montreal on July 23 and will travel to the Labelle terminus by the Train du Nord.”