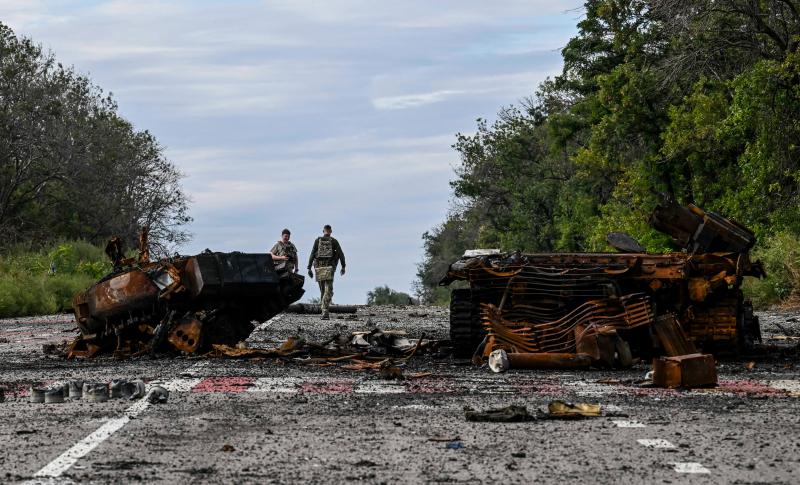 The Ukrainians continued to claim to regain ground and the Russians increased their strikes on Tuesday in response to the breakthrough of the past few days.

Here is an update on the situation on the 202nd day of the war based on information from AFP journalists on site, official Ukrainian and Russian statements, Western sources, analysts and international organizations.

The Russian army has announced that it will respond with “massive strikes” on all fronts to the breakthrough of enemy troops in northeastern Ukraine and their advance in the south.

“Russian air, ballistic and artillery forces are carrying out massive strikes against Ukrainian armed forces units in all operational areas,” the Russian Defense Ministry said, with shelling near Sloviansk, Konstantinivka and Bakhmut, in the Mykolaiv and Zaporizhia regions as well as in Kharkiv.

This shower of strikes responds to the Ukrainian counter-offensive of recent days.

“The liberation of localities from Russian invaders continues in the Kharkiv and Donetsk regions,” the Ukrainian army proclaimed on Tuesday.

In the evening, the chief of staff of the Ukrainian presidency Andriï Yermak released a video in which a voice-over explains: “The 14th separate mechanized brigade has reached the border of the Kharkiv region with Russia. This is the village of Ternova”, five kilometers from the Russian border.

“Since the beginning of September, our soldiers have already liberated 6000 km2 of Ukrainian territory in the east and south and we continue to move forward,” Ukrainian President Volodymyr Zelensky said Monday evening in an online video, while Kyiv only claimed 3000 km2 the day before “liberated”.

Several experts mention the flight of Russian soldiers and the hasty abandonment of equipment. But the Ukrainian advance is not exponential.

Various observers stress the importance of a river, the Oskol, in this part of the front.

The Russians “decided to abandon (…) all this region of Kharkiv and are now concentrated behind (…) the Oskol, which is a natural obstacle that it will be difficult for the Ukrainians to cross, “explained to AFP Pierre Grasser, a historian of international relations and associate researcher at the Sirice laboratory.

In the Kherson region, Kyiv has claimed the reconquest of 500 km2 in two weeks, its first quantified estimate of its progress in the south.

The American Institute for the Study of War (ISW) confirmed on Monday, on the basis of satellite images, the withdrawal of Russian forces from several localities. This “could compromise (their) ability to defend the suburbs northwest of Kherson and suggests that (they) perceive in this area an imminent threat to their positions”.

The Ukrainians “regularly strike military, logistics and transportation facilities” in the region, the institute added.

The General Staff of the he Ukrainian army claims that the Russian 810th Marine Infantry Brigade has lost 85% of its personnel and that its soldiers refuse to return to combat.

Pierre Grasser stresses that the Ukrainians “are in a very positive tempo, between the end of summer and autumn” but know that “in winter, it will be much more complicated”.

The military and diplomatic situation is currently favorable in Kyiv. But “in terms of human resources, there are risks” that with the war of attrition “the human reserves which are for the moment to Ukraine's advantage will weaken over time.” p>