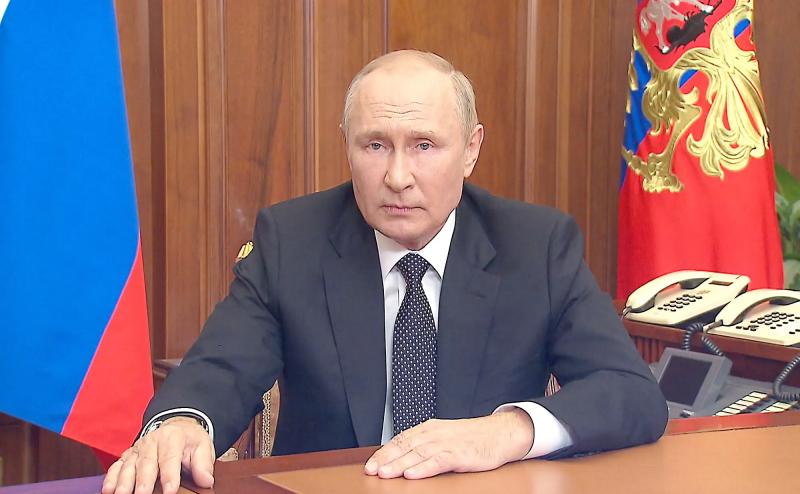 Russian President Vladimir Putin is losing control of his invasion of Ukraine by calling up 300,000 reservists to fight, experts say the risk of resorting to nuclear weapon by Moscow has never been so high.

“When we have reached the point of carrying out partial mobilizations, it means that we have reached quite a bit in the depths of the barrel,” summarizes Pierre St-Cyr, a retired colonel from the Canadian Armed Forces.

A “partial mobilization”, is what the Russian president announced on Wednesday, describing the decision as “urgent and necessary”. There are 300,000 reservist soldiers who must join the war effort, otherwise they face fines or charges.

Arrest of one of the many demonstrators on Wednesday in Moscow against the mobilization announced by the Russian President Vladimir Putin.

This comes as Russian troops are experiencing great difficulties, especially since Ukraine managed to recover 6,000 square kilometers of territory in the north, near Kharkiv, in the space of a few days in early September.

According to two experts consulted by Le Journal, the use of mobilization shows that Putin is running out of solutions, which paves the way for an escalation that could lead to nuclear conflict.

Yann Breault, study teacher at the Royal Military College of Saint-Jean, is categorical: “The danger that Putin could use nuclear weapons has never been so high in six months of invasion. »

“It will scare me if this mobilization is a failure, adds Mr. St-Cyr. What will he have left? That is what is dangerous. » Because nothing is less certain according to him than these 300,000 men will have the desired effect.

“There's a major motivational hurdle and they're going to need some practice. We can expect a month before we see any effectiveness on the ground,” he continues.

“We will certainly use all the means at our disposal to protect Russia and our people,” the Russian president declared in his speech, referring to nuclear weapons. It's not a bluff. »

Earlier this week, Russia announced referendums seen as bogus by the West, from September 23-27, to annex four Ukrainian territories it occupies. This will serve as an argument for Putin to convince his population that Russia “is invaded”, predicts Mr. St-Cyr.

Zelensky, he believes in the bluff

Ukrainian President Volodymyr Zelensky reacted by saying he “does not believe” in Moscow's use of nuclear weapons and downplayed the mobilization announcement.

“He has need an army of millions, because he sees that a large part of those who arrive flee,” he added.

Several heads of state have taken advantage of their appearance before the UN General Assembly to denounce this Russian announcement on Wednesday.

“A nuclear war cannot be won and must not be waged”, castigated American President Joe Biden in particular .