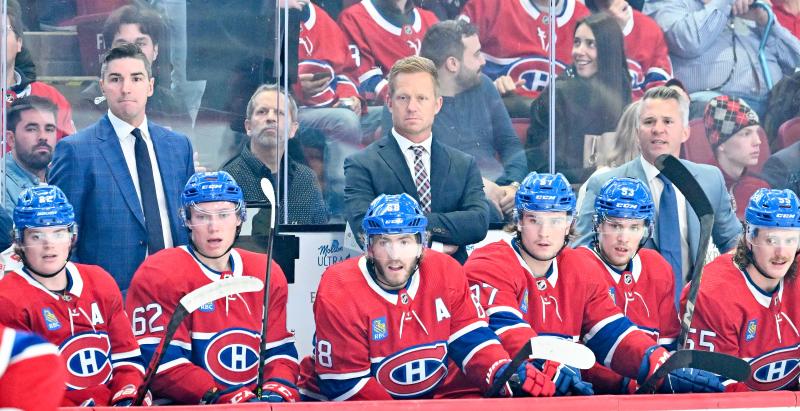 When I look at where the Canadiens are today and where they were a year ago, I have to pinch myself to know if I'm dreaming or if I'm real.

I feel like 10 years have passed in the last 12 months. At the same time last year, the Habs returned to work after a presence in the Stanley Cup final. Marc Bergevin was still the general manager and Dominique Ducharme the head coach.

Team mainstay Carey Price was on the injured list, but that was only to be a matter of weeks before he returns to action after undergoing knee arthroscopy.

Then, on October 7, a bomb fell. Bergevin announced that Price is joining the NHL Player Assistance Program and will be out for at least 30 days.

We know the rest. His absence was prolonged, the Canadiens had an awful start to the season, and on November 28, Geoff Molson fired Bergevin and unloved head scout Trevor Timmins to hire Jeff Gorton as vice-president of hockey. After a lengthy process, Gorton named Kent Hughes as GM on January 19.

On February 9, Hughes relieved Ducharme of his duties to appoint Martin St-Louis as head coach.&nbsp ;

The new management team made other changes and implemented its philosophy in the following months, but we can say that their real departure begins with this training camp. The hunt for positions is on.

The era of standing still

I hope the era of stagnation is over. For twenty years, there has never been a real recovery and the organization has gone in circles, no matter who was behind the bench. Alain Vigneault, Guy Carbonneau, Jacques Martin, Michel Therrien, Claude Julien and Dominique Ducharme succeeded each other with similar results.

There was this surprising presence in the Stanley Cup final in 2021, when the Canadian emerged from the Canadian division, but there we are starting afresh at all levels, whether in the offices, behind the bench, on the rink and especially in net.

The absence of veterans like Price, Shea Weber or even Jeff Petry means that no one has privileges anymore. St. Louis will be able to give ice to those who deserve it.

There are no more big names in this lineup and even in the cases of captain Nick Suzuki and young sensation Cole Caufield, we're not talking about established stars yet.

How to manage the bench?

I can't wait to see how St-Louis will lead. He will use his strengths as a communicator and teacher to work with each individual, but from a collective point of view, how will he manage his bench?

He will have to live with the mistakes of young people, but only up to a point. What will his tolerance level be?

The context differs from that of his arrival in a lost cause last season. St-Louis must aim for victory and keep his team in the playoff race for as long as possible. I only hope that the CH will not be eliminated in January.

We are not dreaming of the Stanley Cup this year, but the team must compete and progress. With all the question marks in the roster, making the playoffs seems like mission impossible, but brushing up against 10th, 11th and 12th in the Eastern Conference is not out of the question.

< p>We don't want to talk about rebuilding, but let's say we're starting fresh with a long-term vision that will hopefully pay dividends quickly.

Even though the injury suffered by Nick Suzukidoes not seem very serious, I do not like the moment when it occurs. He will miss training camp and maybe more, and it is very difficult to find his rhythm in these circumstances. When you come back to the game, it feels like you're behind everyone else. It's easier to come back from an injury mid-season since you've already reached a certain rhythm.

I spoke briefly about P.K. Subbanlast week, just before he announced his retirement. I find it hard to believe that this is the end for him at only 33 years old. Still, he took care of himself and he was an explosive skater. It shows how difficult it is to stay in the NHL in your mid-30s and how players like Alex Ovechkin (37), Sidney Crosby (35), Patrick Kane (33) are exceptional athletes.

I rejoice for Nathan MacKinnonwho signed a deal earning him $12.6 million per season with the Colorado Avalanche for eight years for a total of more than $100 million. He thus overtook Connor McDavid as the highest paid hockey player on the planet and it is well deserved. MacKinnon is a real deal in every way and he led his team to the Stanley Cup. The Avalanche will be one to watch again this season. I'm not worried about MacKinnon. He's still going to deliver the goods, but I can't wait to see how former New York Rangers backup goaltender Alexandar Georgiev performs as Darcy Kuemper's replacement for Washington. Georgiev could surprise.

I was really very proud to present, yesterday, at the Le Mirage golf club, the first Omnium Theo & Louis, for the benefit of the Véro & Louis and care, research and teaching in neuromuscular diseases at the CHU Sainte-Justine and the CRME. We expected to raise over $500,000. I'll tell you about it.