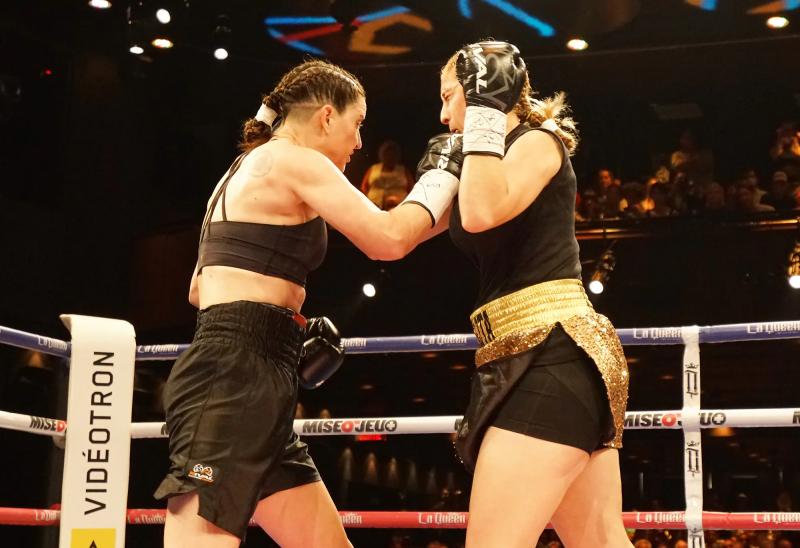 Already, after about thirty seconds, Lozano was on the floor and his corner demanded that the fight be stopped. The referee did not realize this.

We can no longer hide the truth. People want a championship fight between Marie-Eve Dicaire and Mary
Spencer. Everyone said so last night at the Casino de Montréal.

But what is also being said is that Marie-Eve Dicaire will prefer to retire rather than face this fury that is Mary Spencer. She herself expects it.

That said, Marie-Eve Dicaire has still had some big fights in her career and she doesn't have the reputation of being a coward who backs down from a real challenge.

Let's hope boxing fans will be able to witness this true naturalness. As it does not happen often enough in boxing.

RIVAS WILL NOT LOSE HIS TITLE

Oscar Rivas won his world championship title on October 17, 2021. It will be a year in seven weeks. And he still hasn't defended his bridgerweight title since that fall evening.

Oscar injured his hand. But that wouldn't have stopped him from fighting in Cali, Colombia on August 13th. And if, by some miracle, Yvon Michel could offer this fight on October 15th, Oscar would be there.

There are several rumors that the WBC will strip Rivas of his title because of his prolonged inactivity.

Fortunately, the WBC is going to give Oscar a chance. The WBC's annual convention takes place on November 7. Oscar's case will be studied seriously but the WBC is already connected: “A year without a fight, it is certain that it is long. But Oscar is a respectful champion and he was a victim of circumstance. He will get the support of the WBC and we will try to help him,” explained Alberto Leon, vice-president of the WBC who attended yesterday's evening at the Casino.

But the WBC can do nothing to save the gala that GYM was to present on October 6 at the Casino. The news was confirmed yesterday by a member of the Régie des alcools, des courses et des jeux.

I do not have the space to explain the reasons for this cancellation but it is without doubt related to a shareholding problem at Probellum, the group associated with Yvon Michel.

I will have the opportunity to come back to this.

In another life, to write the second season of the series Casinoat Radio-Canada, I had met two wonderful young women. Two Natives. I had gone to Isabelle Picard's house and drank a collection of coffees with Wina Sioui which completed her entitlement. Both had helped me better understand their reality. Peter Miller and Salomé Corbo played the First Nations characters. Isabelle is now a renowned ethnologist and Wina is a brilliant lawyer specializing in Aboriginal rights.

It was Wina who translated into Mohawk the lines that the lovers said to each other after the love. It was magical.

I asked Me Sioui what was the deep meaning of the photo published by Carey Price. The hat and the eagle feather. Wina consulted Elders. Yesterday she showed me the answers she got.

One word. Serenity. Everything converges towards this word. The meaning of this message is clear. Carey Price is calm and at peace with the decision he has made or will make.